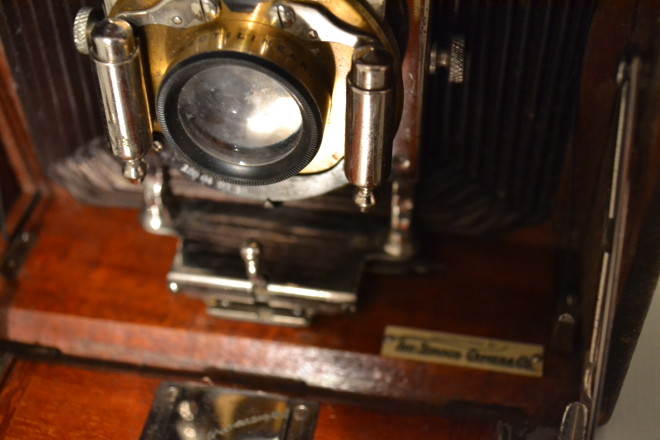 The soft scripted word “Hagedorn” shines softly in gold on the corner of the large prints. There are images of old empty farmhouses in the dead of winter, bright white sailboats leaning dangerously close to deep blue water, a large bumblebee enjoying the nectar of bright pink thistle. 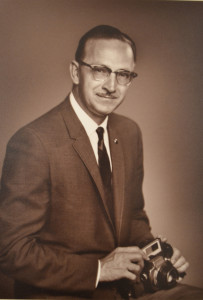 True to the old adage, these pictures are worth a thousand words. But these aren’t just words for the subjects – the farmhouses, the sailboats, the bumblebees, the banked rowboats – these photos speak about the humble photographer who captured these moments up and down the peninsula.

His name was Bernard Hagedorn – better known to the Door County community as Bernie – and although he passed away more than a decade ago, his contributions to the community can be found in high school yearbooks and family photo albums in the furthest reaches of Northern Door, not to mention meeting minutes from the 1960s of the Sister Bay Village Board and the county zoning committee.

He was a photographer who kept his camera within arm’s reach and his mind open to possibilities, whether for his hobbies, his business (Hagedorn Studio) or the community he chose to call home. Bernie was a man of great humor who rarely, if ever, spoke of himself, instead choosing to talk about his love of Ephraim sunsets, The Ridges’ flowers, bees, boats, goldfinches and, more than any of those, his wife Estelle, daughter Celeste, and when they came along, his grandchildren.

“Dad had a great sense of humor. He loved to tell jokes,” Celeste recalled. “People gravitated to him because he was very easygoing. He was a very private person though. He didn’t talk about himself at all. He would never say, ‘I was this’ or ‘I did that.’ Never. He loved his grandchildren and me and his wife. He would talk about that kind of thing – never ever about himself.” 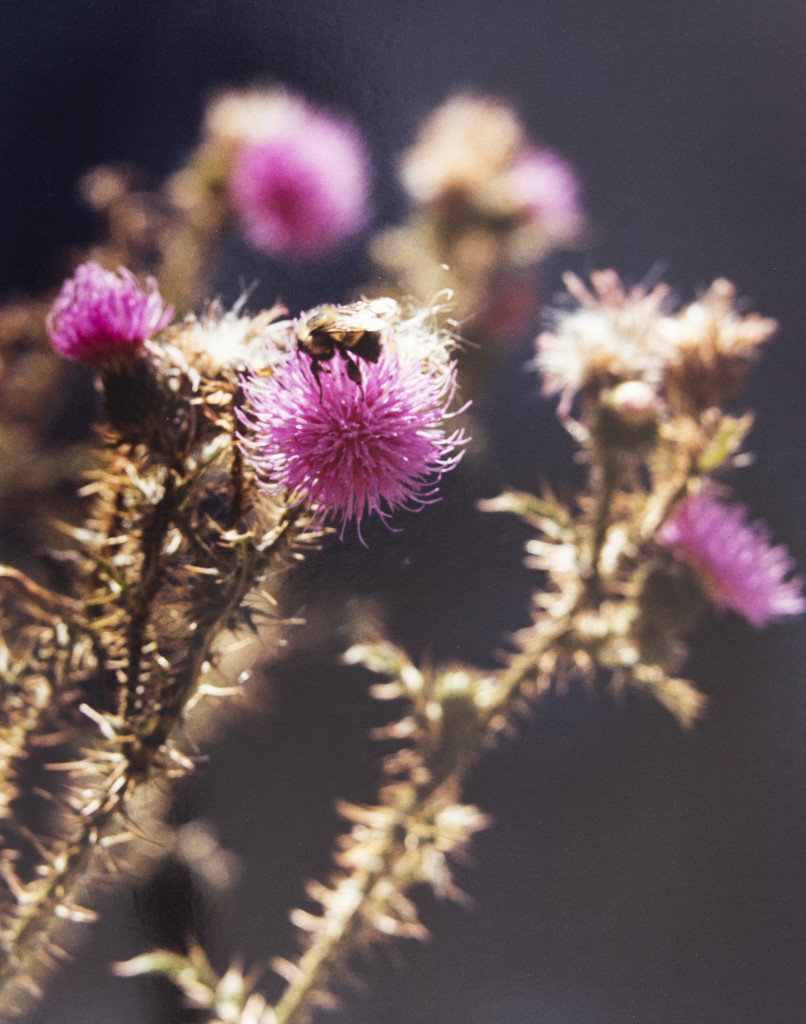 But to say he was never spoken about would be false. His name finds itself on many things Sister Bay and Door County related (he was credited for helping bring sewer and water to the Village of Sister Bay five decades ago), even though he wasn’t a native of the peninsula.

Bernie was born in February 1919 in Royal, Iowa. In the early 1940s, he met and married Estelle Bogaczyk, who he met at a facility that made naval radio equipment during World War II. In 1946, Estelle gave birth to the couple’s only child, Celeste, and just five weeks later, the couple packed up their belongings and moved to an 80-acre farm operated by Bernie’s parents in Ellison Bay to raise and tend cherry trees, cows and crops.

The farm life proved to be difficult and when a second income was needed to support the two families, Bernie turned toward photography. It was a passion he had developed as a high school student and refined as an apprentice for a Park Ridge, Illinois photographer.

Bernie set up Hagedorn Studio in his living room and quickly became the go-to man for local weddings, graduations, high school photos, baby pictures and family reunions. As the only photographer north of Sturgeon Bay, it was no surprise that he was highly sought after.

“He had as many as four weddings a day,” Celeste recalled. “The people really set their weddings around him … in those days, the Catholic weddings were always in the morning so he would have a 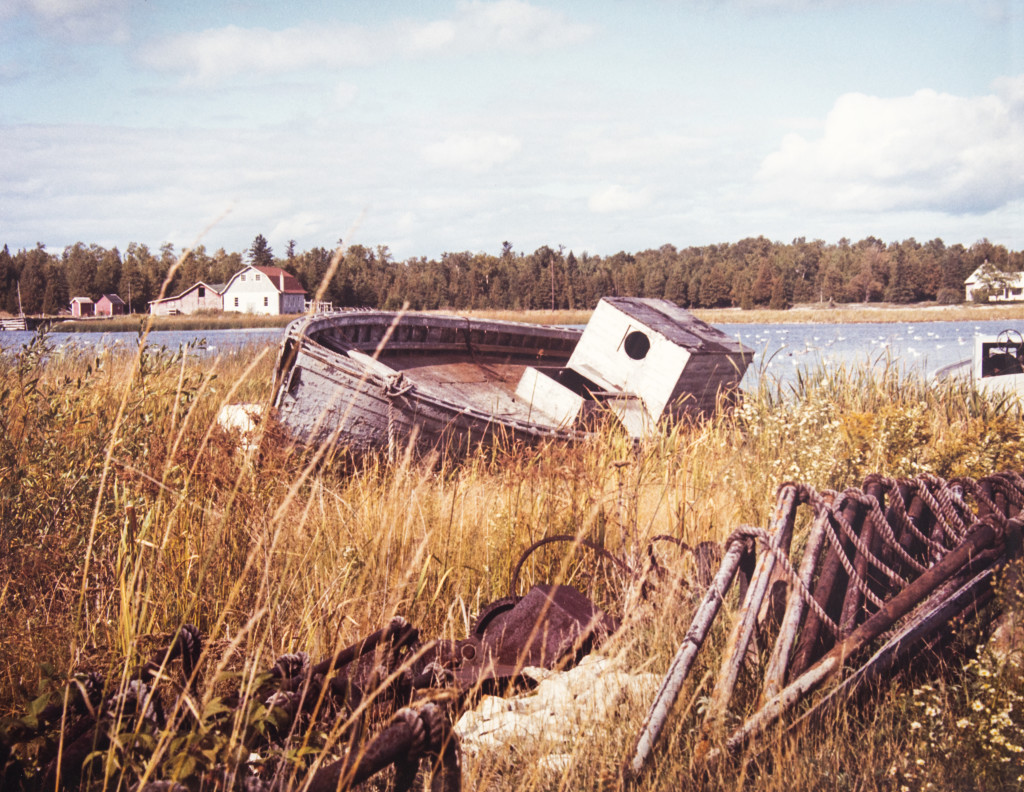 “The Pete”. Photo by Bernie Hagedorn.

Catholic wedding in the morning and maybe somebody in the afternoon had one at their house … then he could go back in the late afternoon to do a 5:00 for their reception and then he could get on the last ferry to go to Washington Island…he always had several in a day so he was all over the county.”

Aside from shooting the photos, he also developed them, retouched the negatives, printed them and, before colored pictures were easily accessible, hand-colored the prints.

In 1956, the family moved off the farm and into Sister Bay. Bernie rented a building on North Bay Shore Drive, dedicating half of it to his studio and the other half to a Scandinavian imports gift shop (Scandinavian Village Gift Shop). Using her secretarial degree, Estelle operated the gift shop and did bookkeeping for Bernie’s studio, and the family lived in the back.

“They ran this business 24/7 together,” Celeste said. 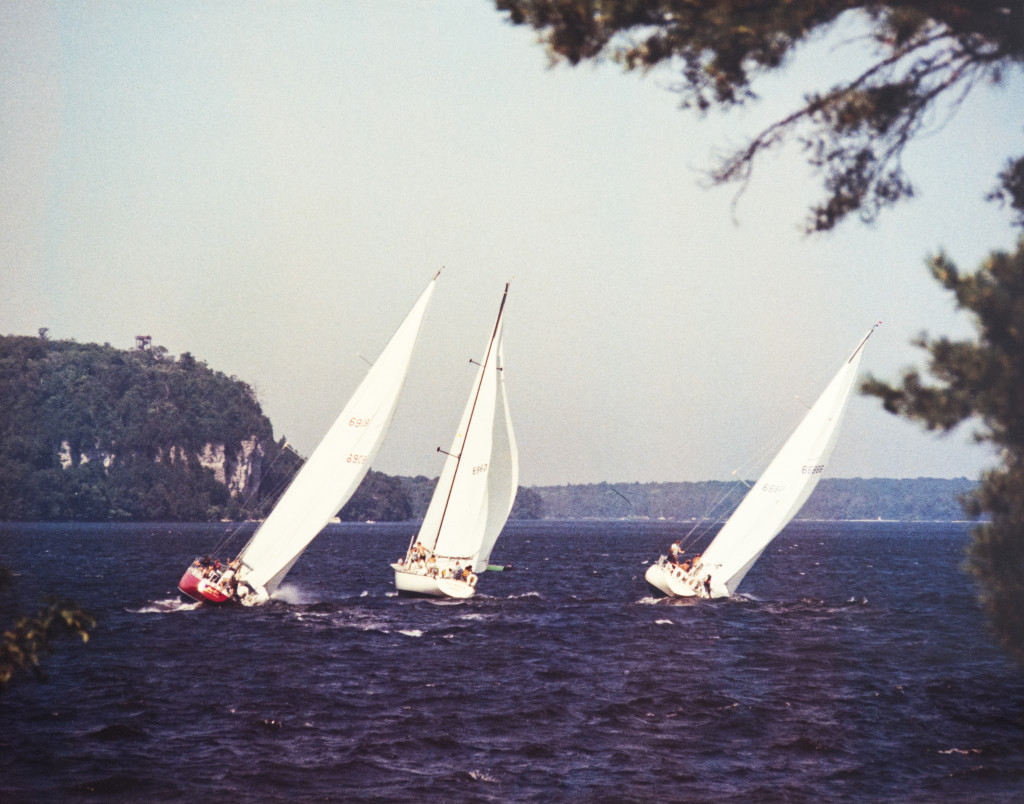 Despite a robust schedule traversing the county to capture the moments of Door County residents, Bernie maintained photography as a hobby. He was fiercely dedicated to shooting in the early morning light and on overcast days, which he lauded for their ability to make color more vivid – two tried-and-true measures that helped Bernie capture many awards, including for his most widely exhibited and published photograph, “Evening Calm.”

In 1969 in response to the gift shop’s growth, Bernie designed and had built a new location for Scandinavian Village Gift Shop on South Bay Shore Drive (what is now Frykman Studio Gallery). He maintained his photography studio in his original location until 1971, when Bernie had a home built near the gift shop and operated his studio out of the basement.

From the moment he moved to the village, he was a tireless servant of his community, serving on the Sister Bay Village Board as a trustee and as president (1963 – 1970) along with the county zoning committee and as the Sister Bay Jubilee chairman. These notable contributions, built on his knack for forward thinking, were honored during the Sister Bay Fall Festival in 1987 when Bernie was honored as Sister Bay Citizen of the Year. 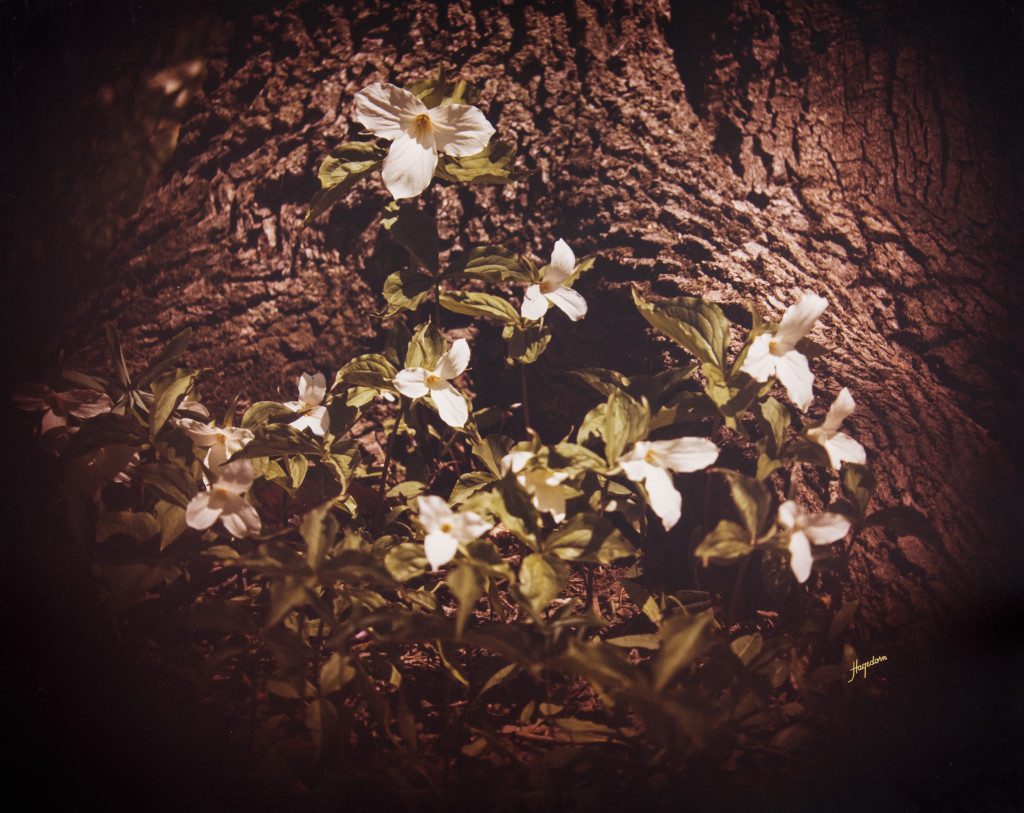 He and Estelle enjoyed bowling and golfing, though his biggest passion was being behind the lens. He also had a special gift for growing award-winning Peace roses, a talent not unnoticed by one flower company that began sending Bernie rose seeds to grow in Door County to test the soil conditions. While any gardener would revel at the recognition, Bernie’s pride for his roses was different.

“He was always proud because my mother’s birthday was October 3rd and he always tried to have roses growing for her birthday so he could give her a bouquet,” Celeste said.

While Celeste’s role in her parents’ business was donning a Scandinavian outfit and working in the gift shop, she occasionally had a place in her father’s photography.

“Whenever dad went to go take a picture and he wanted some color in his picture, he would say to me, ‘Celeste, put on this shirt with that blouse, we’re going to go here to take a picture,’” Celeste said.

But it wasn’t always work for the young Celeste, who enjoyed accompanying her father on his photography outings, whether they were for hobby or work (he also freelanced for the Green Bay Press-Gazette and the Door County Advocate). There is one particular outing, during which Bernie was taking a photo for the newspaper, that stands out for her – it involved Helms Haven and a blue-eyed movie star named Jeffrey Hunter.

“One morning he woke me up and said, ‘Do you want to go over to Helms Haven?’” Celeste said. “Staying at Helms Haven was Jeffrey Hunter – he was in the King of Kings movie. I was in high school so it was like, ‘Oh, a movie star!’ So we go over there and dad was going to take a picture for the paper and there was Jeffrey Hunter with his beautiful blues eyes and this baby blue blazer and white slacks on. I got to go along and meet him. For a young high school kid, that was a big deal.”

Bernie retired his studio in 1983 and the gift shop in the early 1990s but the life within his years never slowed down. When he reached 80 years old (in 1999, three years after Estelle died), he picked up a paintbrush and began watercolor painting – a newfound passion that he continued until his death in 2002 at the age of 83.

“When he died, he did not get front page because unlike some of the other people, he was not a local,” Celeste said. “He was a transplant. It was different.” 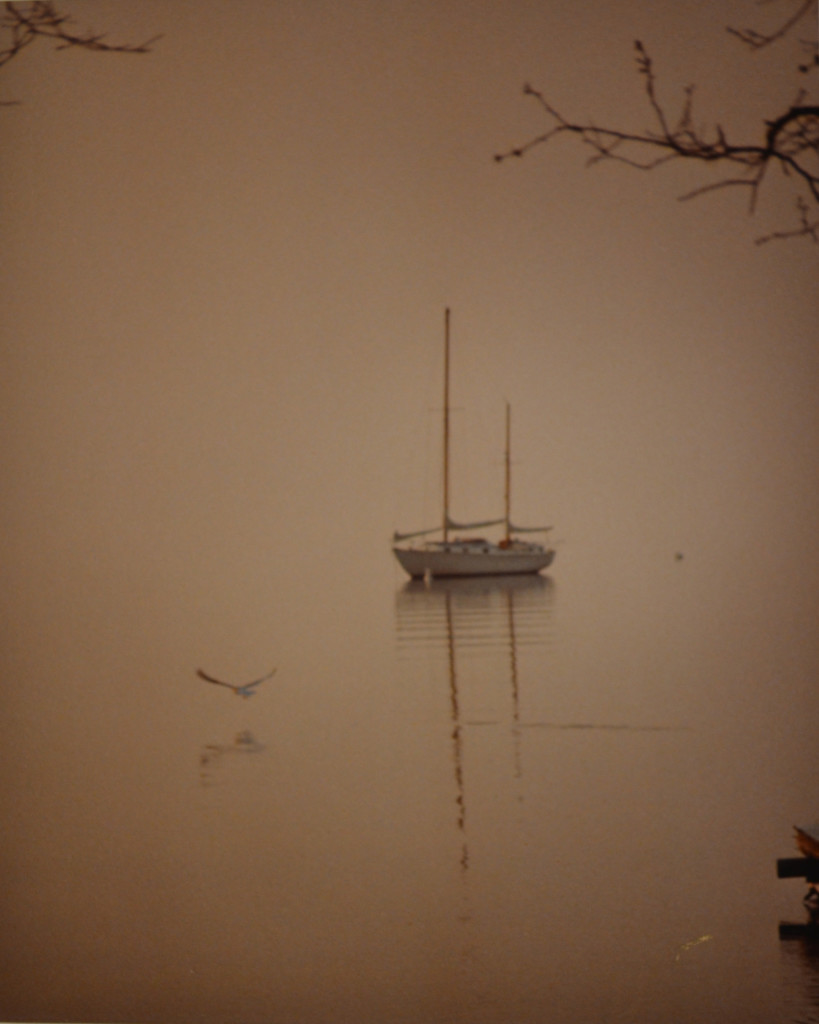 The cameras that captured countless images of Door County’s nature and people were inherited by Celeste and remain in pristine condition. Some of his prints are available for sale during the summer at Corner Of the Past in Sister Bay.

As for his legacy and how the humble man from Iowa is remembered here today? Perhaps his daughter says it best.

“He was a very artistic, creative, caring, quiet person who loved to tell jokes and loved to be with people,” Celeste said. “It was a wonderful life.”