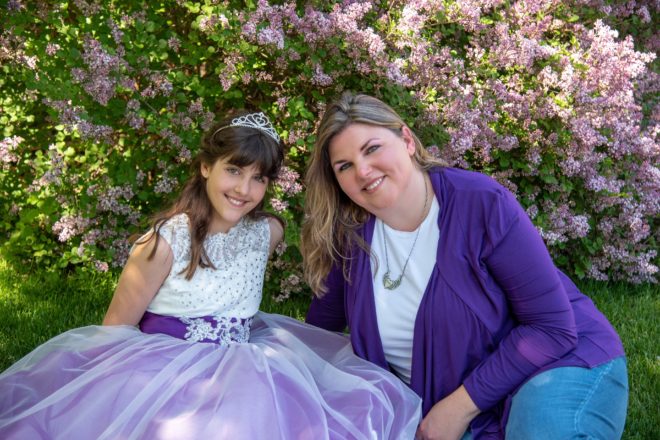 Mercedes Wadkins was raised on Disney — the fairy tales, the magic, the princesses. Her favorite films include Sleeping Beauty and Fantasia. A Washington Island native and Sturgeon Bay resident, she’s made the trek to the mecca in Florida many times.

“I’ve been to Disney World a bazillion times,” Wadkins said. “It’s my happy place. My poor husband never had been when we met. We made up for that.”

So naturally she shared this love of all things Disney and the company’s iconic films with her daughter, Isabella, who came to the Wadkinses through adoption in 2006 after a seven-year struggle with infertility, complete with three rounds of in vitro fertilization.

But young Isabella noticed that something was lacking in the Disney tales.

“When she was three or four, she wondered why there were no adopted princesses,” remembered Wadkins. She also noticed that non-birth parents were often portrayed as villains and were, frankly, terrifying — think Lady Tremaine (aka the wicked stepmother) in Cinderella or Mother Gothel in Tangled.

“That was traumatic for her,” Wadkins said — especially the Mother Gothel character. “Here this adoptive mom was an evil, crazy person. [Isabella] was depressed about it all, so we would make up stories.”

The stories included a king and queen who longed for a child and received a little help from some fairies, a wizard and a magic garden. And there were dragons, potions and an adopted princess, of course. They set the stories in the realm of Bellasia, a play on Fantasia and an anagram for Isabella.

And as many princesses do, Isabella hosted more than a few tea parties for her parents.

So Wadkins did a little internet searching, looking for the perfect princess tea for her daughter’s tea parties. But she came up with nothing.

“There are a bazillion tea sets, but there was no tea for kids at all. Even tea rooms serve kids lemonade or punch,” she said.

That was the start of Bellasia Tea.

“I thought we could do this story and tea,” Wadkins said. “But I knew nothing about books, tea, anything.”

She sat on the idea for a couple years and credits her mom, Sara Coats, for giving her a creative push; her husband for throwing in his support; and her daughter for inspiring her.

“Mom put the words down in story form,” Wadkins said. “I found an illustrator. Then I went into the tea world, and a lot of people took me under their wing, mentored me and helped me. Making a company for tea, a book — it was very exciting, sickening. I was nervous, anxious.”

Wadkins talked to her husband before diving in. “I told him, ‘I’m planning on investing a lot of money in this, and it might not work.’ He said, ‘Well, we won’t know unless you try.’”

So, she went for it.

“What better way to show kids not to be fearful,” Wadkins said. “I wanted Isabella to know that you can follow your dreams.”

She started small. “I would do three or four things every day. If you look at a project as a whole, it’s too much. Just do a little bit every day,” she said.

In 2013, Wadkins officially started Bellasia Tea. That same year, she found out she was pregnant with her son, Michael, 15 years after trying to conceive.

“I just about fell over in the doctor’s office,” she said with a laugh. “He’s our miracle.”

Soon after, she published her first Bellasia fairy tale, Once Upon a Tea, cowritten with her mother.

Even with two young ones at home, Wadkins managed to promote her new business. And now, not only do many local businesses carry the tea, but also specialty tea stores all over the country — from California to Indiana to Alabama and in between.

“I was literally in the closet doing phone calls while my kids were being crazy in the next room. I’d think, ‘Why didn’t I start a wine business instead?’” she joked.

Wadkins began with a few loose-leaf teas (caffeine free, of course!) with names such as Mystic Melon, Fairy Sunset and Dragon Berry. She continued to talk to tea experts, learned more and more about different flavors to try, and started to realize the health benefits of tea for children.

“I started this with a fairy tale and tea party in mind,” Wadkins said. “As I’ve gotten more into it, I really have pivoted. This is just a really great, healthy beverage for kids. There is sugar in juice, in everything — it’s overly processed, no vitamins.”

And Bellasia is fun for kids — or anyone — to drink. (A lot of Wadkins’ adult customers buy her products for themselves.) When steeped, the tea turns the water to beautiful, bright colors; it smells sweet; and the brews taste yummy whether they’re served hot or cold. If they don’t, Isabella and Michael let Wadkins know.

On one occasion, Isabella took a big drink and declared, “This is awful!”

“The honesty that comes out of kids,” Wadkins said, laughing. “They are my research-and-development team!”

Now Bellasia has even more flavors to offer, including a line of “royal tea,” featuring Fairy Berry, Warrior Punch and Dragon Moon.

She was recently a featured speaker at the Chicago International Tea Festival — via Zoom, of course — and is preparing for the publication of her second fairy tale, which will include more male characters and an alicorn.

And fun for parents who realize they’ve got a new activity to try at home: an old-fashioned tea party. Pinky up!

Bellasia Tea is sold at many businesses throughout Door County and online. Visit BellasiaTea.com to learn more.