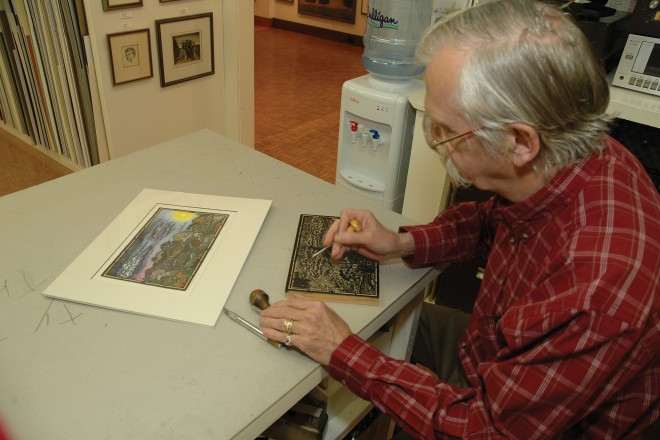 His name is R. Charlie Lyons. His gallery, The Paint Box Gallery, is nestled next to the Red Barn Shops just south of Town Line Road on Highway 42 in Ephraim. There, amidst a broad selection of miniatures and prints by a host of other fine artists, you will find the mother lode of Charlie’s own unique wood-block prints. In a moment, we’ll consider them more fully, but before that, a few words of introduction.

Charlie Lyons was born in Sturgeon Bay in 1940. He attended the University of Wisconsin-Madison and the University of Wisconsin-Milwaukee. He has taught and lectured throughout Wisconsin, and curated or consulted locally for many years. He has exhibited throughout the Midwest in one-man shows (at least 50 of them), group exhibits, and juried art fairs. His work appears in permanent collections throughout the state. He is represented by the Paint Box Gallery; the Collectors Gallery in West Lompoc, California; and Artworks Gallery in Green Bay. He was recently nominated for the statewide Governor’s Award for the Arts.

Now, on to the work.

All of Charlie’s prints are hand colored woodcuts. His engagement with wood block carving started early. In high school, like many, he cut his first prints in linoleum blocks which he now describes as “a cold, hard, dispassionate material.” Soon thereafter, he found that wood was his preferred medium, largely because of its warmth. Once in college, he took courses in virtually all of the art forms except wood blocks, but continued to work in that medium on his own. Once he realized that his own originality seemed to express itself solely through wood blocks, the die was cast.

Charlie prefers to work in Ponderosa Pine, which is harder and more resilient but still giving under the knife. It cuts relatively easily, allows him to draw with the knife and the gouge but holds up for a reasonable number of prints. Since 1964, he has drawn directly on the block, obviously working out a?mirror image of the final print. His drawings are meticulously worked out on the block but they really only pave the way for more spontaneous carving. One might suggest that the drawings are the rehearsals, the cutting the performance. As Charlie says, “If it’s a good drawing, it gets cut and if it’s not, it becomes firewood…Cutting is very final,” he notes wryly.

When it comes time to print, Charlie will do so by hand rather than use a press. Printing by hand allows him to “take into account any surface eccentricities.” It also allows the printer to lift the paper to peek under it and see to it that all is well between the paper and the block. Make no mistake about this: Charlie’s work is about as far from standard print replication as it can be.

Charlie began adding color to his wood block prints in 1969. Rather than doing so in the traditional Western way, block by block, which causes a color build-up on the print, he chose to add the color by hand to the printed paper. In this way, he was able to achieve the effect of a “rich, glowing color that seemed to be coming from behind the line.” As a result, there is a luminosity that vibrates through his work – a phenomenon that I find profoundly moving.

Looking around the gallery, one is struck by the variety of size in Charlie’s work. While he has done some monumental pieces, there are also miniatures of stunning vitality. In this sense, small has its own kind of achievement. With his usual precision and charm, Charlie explains that “every idea has an appropriate size. Sometimes you just have a small idea . . . it’s a little idea and it just wants to have a certain visual intimacy.”

This brings us to the works themselves. In the title, I have described Charlie, the printmaker, as a storyteller. This penchant for storytelling was there from the very beginning. Two of the earliest sets of woodcuts arose out of Charlie’s affection for his hometown and the remarkable people who impacted his life early on. The first series is uncolored and is titled, “A Remembrance of Places Past,” most of which are in Sturgeon Bay; many of these buildings are still standing. Each woodcut comes with a story. If you can get Charlie to tell it, it is well worth the listen.

The second group is called “A Personal Commemorative Postage Stamp Series of Odd and Extraordinary People I Have Known.” Yes indeed, the prints are the size of postage stamps, all of which are colored. As with the buildings, the characters behind the stamps are collected in Charlie’s memory.

Not to worry.?At this point, we come upon more universal material. As Charlie puts it, “I have a particular fondness for Far Eastern and Middle Eastern literature and poetry and as I am reading these things I am thinking, ‘What could this look like??Do I have a vision of an appearance of this?’?And so my work is in many ways an attempt to visually realize what these tales of wonder and fantasy are.?One of the things that I don’t do, however, I do not depict events in the story. Events themselves have a dynamic of their own.?This is a dynamic I don’t want to have in the picture.?I want the picture more to be an embodiment of the story and a kind of a capturing of the time, of the milieu of the story. I’m trying to introduce a new level of understanding about the story.”

Here is the place where remembrance is transformed into myth. At this point, the story is not merely the one Charlie carves into the wood block; it is, as well, the story the finished print calls forth from the imagination of the viewer. The virtual worlds he conjures for us are many and amazing. Behold:  The Lost and Legendary Cities, all drawn at the same time but cut over a year so that each block has a singular style; the Aladdin Suite – key elements of the story arranged in a single frame with geometric precision to match the mystical arc of the tale; The Great Heros of Western Man, celebrating flawed people who happened to appear at the right time in the wrong place; An Informal History of Magic, containing the still unfinished block entitled, A Sacred Blanket for a Shaman (for which I wait). Then there is the monumental evocation of The Journey of Siddhartha – nine huge wood blocks that would fill one wall of a large room (there is a small version as well). Then there are the Poets and the Dream Forests – and finally, the panels I know best, The Fantasy Voyage of Sindbad, ten blocks which have captured my own imagination for I must also confess loving these ancient stories.

What is it that prompts these serial fantasies? According to Charlie, “The general trend of printmakers to make a series intellectually and visually leads to [many] possibilities with the same or similar subjects.” Such being the case, our own Charlie Lyons works comfortably in the tradition of printmakers from Dorè to Goya to Baskin – but with the following wrinkle:  Charlie’s work goes far beyond illustration. In his own way, Charlie does what medieval illuminators did. He enlightens, he reinterprets, he expands each and every tale he presents in profound and wondrous ways.