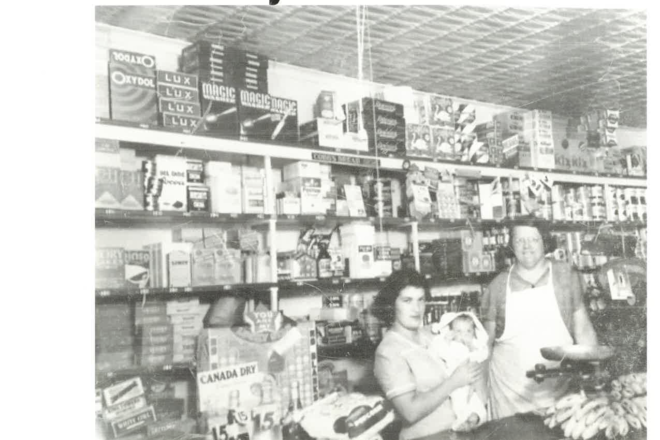 Eva Klingbile (right) in her store with Jean Wilkus and her son, Tom.

Before moving his business to Fish Creek, Alex (C.A.) Lundberg owned a store attached to his two-story home in Juddville, where Juddville Road (really just a dirt path then) met the shore of Green Bay. The Aug. 12, 1880, edition of a local newspaper reported that “Lundberg and another party from Menekaune intend establishing a store two miles south of here (Fish Creek), at or near Juddville.”

The store opened in 1881 and carried dry goods, clothing, furnishing goods, hats and caps, boots and shoes, crockery and groceries, and it would purchase or trade for eggs, butter and potatoes.

On Oct. 6, 1894, a newspaper ad with the headline, “Keep Your Eye on Juddville During the Next Thirty Days” announced that all merchandise, the store building, the residence and the dock that Lundberg had purchased earlier from his brother, Kassander; and his partner, Charles Settersten, would be sold. The reason given was that Lundberg would be “confining all my operations to Fish Creek.”

Evidently the Juddville store closed for a time, but a notice in the March 9, 1895, newspaper announced that Lundberg would reopen it in April. Seven years later, when Lundberg finally opened his general store in Fish Creek, the Juddville store was sold to Myron Stevens, the son-in-law of Increase Claflin, who the first white settler of Door County. Stevens closed the store after a failed effort to establish a vineyard there.

The building was described as “clad in a grayish-brown tar paper with a pattern vaguely resembling bricks.” The store was in operation at least until the 1960s and perhaps until Klingbile’s death in 1972. There were rumors that she had a short career as a bootlegger, supplying dandelion wine to personnel at Peninsula Players before Prohibition ended in 1933. She had also been a teacher at the Ephraim Pioneer School, and local kids called her the “mayor of Juddville.”

Dr. Anne Emerson and Dr. Tucker Emerson have since converted the building that Eva Klingbile once occupied into the Emerson Chiropractic and Wellness Center.