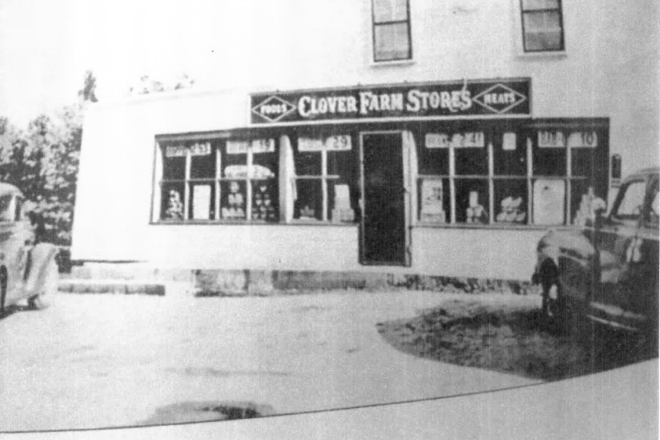 Arnold and Ida Sohns had been married for seven years in 1917 when they arrived in Ephraim from Maple Grove and bought a very small, dark shed that had been the Keys blacksmith shop. Arnold established his butcher shop in a space so small that there was room inside for only three or four people at a time, but it soon became popular.

That was because – ever since an earlier butcher shop owned by Fred Larson had gone out of business – Ephraim residents were forced to either go to Sister Bay to get their fresh meat from Frank Jischke’s butcher shop or wait for his twice-weekly route through Ephraim with his horse-drawn meat wagon.

There were two big cedar trees in front of Arnold Sohn’s shop, and he nailed a beam between them at just the right height to hang a beef carcass, from which he’d carve off cuts and drop them into an enamel pan. Customers were pleased to know they were getting really fresh meat.

The store had a freezer – it was next door to the first electric-company building in Ephraim – and meat to be frozen was wrapped in white paper that was waxed on one side. Fresh meat for customers was wrapped in pink paper, pulled down from a big roll that hung from the ceiling, and tied with string.

People asked Sohn to stock milk, butter and breakfast foods, so he added a small shelf for those products. Soon there was a gasoline pump out front, too, and the Sohns’ granddaughter, Karen Ekberg, who grew up in the store, remembers her grandfather running outside in his white butcher apron to pump gas. The pump remained there until the 1950s or ’60s.

Ekberg remembers that her grandpa had the first patented chicken plucker in Door County. Sohn bought chickens from many local farmers, and the number he needed increased as the hotel business grew. On Saturdays, he sat behind the store on an orange crate, with boxes of dead chickens around him. He put them in the plucker, and the machine’s big rubber fingers did a good job of removing the feathers as he turned the crank. Feathers floated over Ephraim like a cloud, and people timed their shopping so they could watch the process. Later, Sohn figured out how to electrify the machine.

When Sohn had a devastating stroke in 1945, Ekberg’s mother, Helen Sohns Ekberg (a founder of the Ephraim Historical Foundation in 1939), helped in the store in addition to teaching at Ephraim Pioneer School.

Her husband, Bill, also gave up his wartime job in the shipyard to help keep the store going. He picked up the chickens in a Model T pickup, used the chicken plucker for years and even loaned it to anyone who wanted to pluck their own chickens or Thanksgiving turkeys. (The machine was likely the inspiration for the chicken plucker in the Northern Sky Theater show Belgians in Heaven.)

During the early days, the family’s living quarters were behind the store. When Karen Ekberg was growing up there, the family’s living area had been moved upstairs, but the kitchen was still behind the store – and much enlarged by that time. There was still an open door between the kitchen and the store, and if a customer arrived during mealtime, the meal was put on hold to complete the sale and engage in a friendly chat.

Ekberg remembered a storeroom on the back of the building, where deliveries were made from the alley.

“We got fresh produce every summer from a family in Little Sturgeon,” she said. “They always brought all the kids with them and came after dark.”

Bill used the old pickup to deliver groceries to campers in Peninsula Park, who often stayed all summer and walked down to the store to place their orders. When Karen was old enough to drive her dad’s 1941 Chevy pickup, she took deliveries to yachts in the harbor. She especially remembers a member of the Evinrude family – inventors of the first outboard motor with practical commercial applications – and his wife, Frances Langford, a World War II heartthrob who performed with Bob Hope’s USO tours.

“She invited me to tour their yacht,” Ekberg said. “I’ve never forgotten the carpeting in the master cabin made of pink ostrich feathers!”

Ekberg recalled that all those chickens that were plucked behind the store had colored plastic rings on their legs to identify them as fryers, capons or stewing hens. When they were little girls, Ekberg and her sister, Joan, loved to wear the rings on their fingers.

“We thought we were really hot stuff,” she said with a laugh. “It was a wonderful, wonderful way to grow up.”