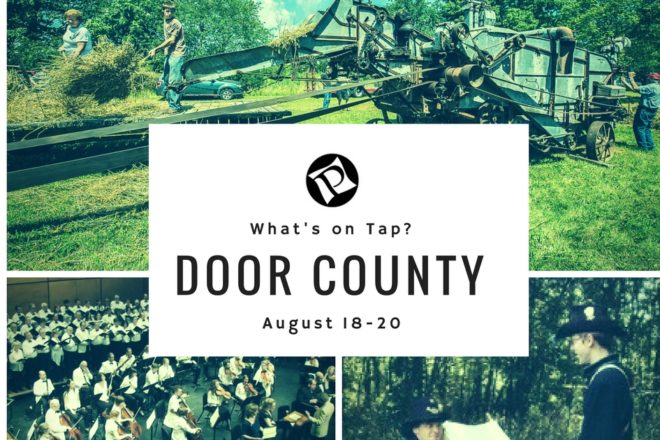 Get ready for this weekend. Live music accentuates each day as long-standing traditions celebrate Door County heritage and arts. Be sure to make it up in August to see the summer season come to a spectacular close.

Imagine what Robert F. Kennedy would say if here were alive today. Then imagine Robert as a puppet saying that to you. Join Sturgeon Bay’s Margaret Lockwood Gallery in this puppet show of the beloved late U.S. senator remembered for being one of the first American modern liberals.

Egg Harbor. With a musical style as unique as their name, this local Wisconsin band has played for years on end out of Appleton. Show starts at 9 pm. Free.

The Gibraltar Historical Society is reviving Civil War heritage this weekend with a Civil War camp run by soldiers donning period clothing and equipment. Come to Fish Creek and get a glimpse of what it would be like to be at war in the 1860s. Suggested donation $4/adult, $2/child.

Come watch professional kite flyers perform an amazing show with their stunt kites, and join in on the day of fun in Algoma. Festival runs 11 am – 4 pm, concessions and kid’s activities are available.

The Peninsula Music Festival’s final performance will send the season off with a grand finale. Featuring renowned Canadian violinist James Ehnes playing Shostakovich’s Violin Concerto, Augusta Read Thomas’ aureole, and Prokofiev’s Symphony No.7, this concert at the Door Community Auditorium is not one to miss. Performance begins at 7:30 pm.

Head down to Valmy for the 35th annual Thresheree. See some amazing farm equipment from the 1960s, enjoy live music, and end the day with some mud pig wrestling.

Ellison Bay’s Linden Gallery has been a cultural bridge between Door County and China since they opened more than 20 years ago. In an old Lutheran church, their collection is something to behold. Visit them this weekend to see a showing of Bazyli Studio of Baileys Harbor’s wearable art, inspired by Chinese heritage and style.

Catch Peninsula Player’s most recent show in this Sunday evening performance of “Lord Arthur Savile’s Crime,” a witty comedy chock full of botched murders and intrigue based on the story by Oscar Wilde. The performance will be at the Peninsula Players Theater north of Fish Creek and begins at 7:30 pm.