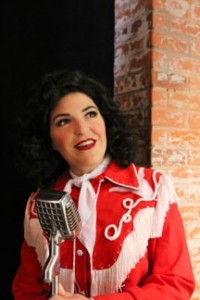 The toe-tapping, heartfelt musical Always…Patsy Cline created and originally directed by Ted Swindley is based on a true story. It opened Sept. 3 at Peninsula Players Theatre. Always…Patsy Cline features more than 25 of Cline’s classic songs and will run for seven weeks closing Oct. 19 with a 4 pm matinee.

Patsy Cline, a legendary singer with an unforgettable emotive voice, blazed the trail for female singers in the country music industry. Her untimely death in a 1963 plane crash created a reverence around her recordings.

This down-home musical tells the story of the music legend’s friendship with her devoted fan Louise Steger, a Texas housewife. “The show is based on factual events,” said Brian Russell, director of Always…Patsy Cline. “Louise is a real person, and the story she tells about meeting Patsy absolutely happened. I don’t want to say any more than that, at this point, because I don’t want to give anything away. I’ve found in the past that many folks walk into this piece not knowing anything about this story and I don’t want to give away any ‘spoilers!’”

“A lot of our focus has been on making every moment emotionally truthful and rooting the approach to each song in recognizable human behavior,” Russell said. “In one of the early rehearsals, I spoke with both Christine (Mild) and Karen (Janes Woditsch) and I talked about wanting to discover the clarity and complexity of every moment of the show. Christine, I think, coined the term ‘clariplexity’ out of that, and we have been using it in rehearsal ever since.”

The Peninsula Players performs Always…Patsy Cline Tuesdays through Sundays at 7 pm with a 4 pm matinee Oct. 5 and Oct. 19. Individual ticket prices range from $38 to $44. For more information or to reserve tickets call 920.868.3287 or visit peninsulaplayers.com.