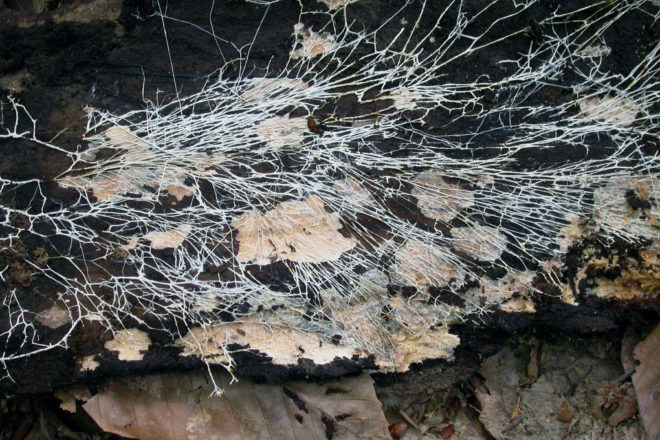 he vegetative part of mushrooms is this actively growing mycelium covering a dead log. Photo by Charlotte Lukes.

Did you know that a healthy forest can survive only when it has the proper mushroom components?

Mushrooms – in the fungus family – can be saprophytes, parasites or mycorrhizas. Many are in the saprophyte group, whose job it is to break down dead plant material and return it to the soil for use by chlorophyll-containing plants.

Parasitic fungi attack living organisms, destroy life and can affect humans as well as plants and animals. The giant chestnut trees of the Northeast were killed by a tiny fungus introduced to this country from Asia, and many of you may remember the tall elm trees that used to line city streets before they were destroyed by another fungus.

However, there are many other mushrooms that are friends of trees because they form intricate, delicate relationships. These are mycorrhizal fungi that live in the soil and thus escape our attention. They either surround or penetrate the roots of trees and help the trees by conducting moisture and certain minerals to the trees’ roots. The trees, in turn, transmit needed nutrients to the fungi that they cannot absorb by themselves. It is a symbiotic relationship, meaning that both benefit from the union.

So much goes on in the soil that we don’t understand. The American beech tree offers a good example. It is an important native tree whose wood is used for making railroad ties, gun and tool handles, drums, flooring and plywood. It is also an important link in helping the white Indian pipe flower to grow. A fairly common mushroom, Russula brevipes – the short-stalked Russula – acts as a transfer agent in the soil, moving nutrients from the beech tree’s roots to the flower.

Beech bark disease has been destroying many of the mature beech trees in the county during the past 10 years. The disease is a combination of a beetle and a fungus that invades the bark and causes a white, powdery material to coat the tree trunk. It is estimated that about 95% of the mature beeches will be eliminated, so what will happen to the short-stalked Russula and the Indian pipe flower, which are so intimately associated with these trees?

The loss of beech trees will also have an effect on many other mushrooms that may have a symbiotic relationship with them, as well as all the other fungi that help to decompose the dying wood. When the trees no longer exist, will that eliminate these fungi, too?

An invasive insect, the emerald ash borer, has been killing native ash trees in much of the Upper Midwest. It is a slow process as the insect bores into the bark, and woodpeckers seek out the critters to eat. That is when you notice long, vertical strips of bark being peeled away from the trunk. It is surprising to see how many ash trees exist in the landscape as this destruction becomes more evident.

Ash lumber is used for furniture, cabinets, countertops, flooring, baseball bats and tool handles. It takes stains very well and can become quite artistic in the finishing process. We used ash and beech as firewood for our two wood stoves. Like the beech, the ash is another valuable tree that will be gone from our forests. And again, how many fungi will be lost when this mycorrhizal relationship is gone?

There are two kinds of mycorrhizas. The one that lives on the outside of the tree roots is called ectotropic, or ectomycorrhizal. The other, known as endotropic or abuscular, lives within the tree roots. It is thought that the latter is more beneficial to the invaded plants. In fact, certain wild orchids cannot exist without these fungi entering their root system.

Wild orchid seeds are so tiny that they have no internal food source and must depend upon mycorrhizal fungi to help them initiate photosynthesis – a symbiotic partnership that goes on throughout the plant’s life. In fact, some native orchids such as the striped coralroot have no chlorophyll at all.

One of the many benefits derived from the relationship between trees and fungi is that the fungi obtain sugars from the tree roots to use as energy. The fungi, in return, transfer nitrogen and phosphorus to the trees and protect them from drought, nematodes and toxic heavy metals. They act as a safety net, preventing nutrients from being leached away, and they aid in carbon transfer between trees.

Entangled Life, a fascinating, new book by Merlin Sheldrake, reveals the importance of fungi to all living things. He discusses historical studies and the most recent research on how mycorrhizal fungi do their work underground.

A new documentary video called Intelligent Trees tells how they communicate with and help each other thrive. Much of this is accomplished with the many soil fungi that permeate the root systems of trees all over the earth.

So the next time you hike in a forest preserve or park and see a healthy grove of trees, know that it is the unseen world of mycorrhizal fungi that provides the means for this marvelous landscape to thrive.