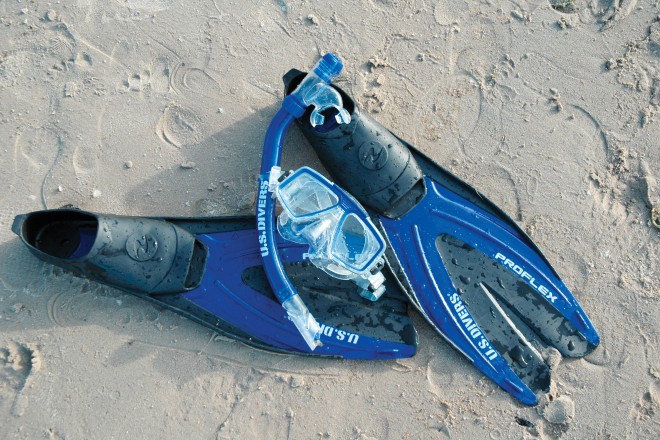 Warm sunny days in Door County are to be revered for many obvious reason. For one, consistently warm summer days bring the temperature of the surface waters that surround the peninsula to a

comfortable level for immersion. During this rather short-lived period, Door County’s waters are ideal for snorkeling. With hundreds of miles of shoreline where shipwrecks and shoals wait to be explored, there is much to see.

With simple gear, snorkeling is a great way to interact with this underwater world. Just about everyone who can swim can also snorkel. With a mask and a snorkeling tube, and optional flippers for your feet, you can explore what lies beneath.

Although few will mistake Green Bay and Lake Michigan for the Caribbean, the clear freshwater is surprisingly rich with color and abounds with marine life. Snorkeling over old sunken cribs that teem with schools of striped perch and small-mouth bass can be outstanding. The tranquility provided while snorkeling through these fresh waters of fish, as they swim in and out of plants and giant glacial placed rocks, is only heightened when you realize there’s no lurking danger from jellyfish and skittish barracuda.

Door County’s numerous parks make for convenient access to the water from shore. There are dozens of locations that offer variety of conditions for snorkelers. On calm sunny days, lakeside locales such as Cave Point in Jacksonport offer exploration of underwater cliffs and unique rock formations weathered by millennia of pounding seas and crushing ice.

The peninsula’s encompassing waters are soaked with the remains of historical shipwrecks. Ferocious gales and menacing fires have sunk dozens of ships in these waters. The cold, fresh water of the Great Lakes continues to keep many of these historic shipwrecks (dating from the 1880s to the 1930s) seemingly frozen in time. Some of these wrecks lie in water shallow enough for snorkeling, and some are even accessible from shore. Snorkeling over these wrecks can bestow an eerie firsthand interaction with the past and provide a powerful reminder of Mother Nature’s wrath.

The Fleetwing, a classic Great Lakes schooner, lies in five-to twenty-five feet of water on the west side of Garrett Bay. Built in Manitowoc and launched in 1867, she was a sturdy cargo vessel with a 133′ keel. She sailed during a period when schooners and other sail-powered ships were fast being replaced by steamers. During the late evening in September of 1888, hours after departing from Menominee with a hold of lumber, the Fleetwing faced a fierce northwest gale as she neared the tip of the peninsula. As winds increased and seas worsened, her captain miscalculated their bearing and rammed the ship into the rocky beach of Garrett Bay. Her remains lie in four sections on the sloping rocky bottom. The largest portion of the wreck is the section closest to shore, lying at a depth of ten to twelve feet of water. The Fleetwing is accessible by shore from the public boat landing, lying roughly ninety yards east-northeast of the dock.

Other sunken ships that can be explored with snorkeling gear include the Bullhead Point wrecks in Sturgeon Bay (three different ships built in the late 1800s) and the Louisiana on the southeast side of Washington Harbor. The ships at Bullhead Point are accessible from shore while the Louisiana is only reached by boat. Many of the wrecks surrounding Door County have been outfitted with mooring buoys for boaters. Mooring buoys help to eliminate damage to wreck sites caused by the use of anchors.

Most visitors to Door County will never explore what is certainly one of the largest and most intriguing visible sanctuaries available on the peninsula. Beautiful marine life, giant boulders deposited during the last ice age, and historically rich scatterings of shipwrecks are treasures that await sub-surface explorers. With simple, inexpensive gear, this vast new world becomes amazingly accessible.

Snorkeling is made much safer when a diver’s flag is used. The red flag with a white diagonal stripe alerts boaters that a diver is in the water near the flag. Boats are required to stay two hundred feet away from these flags.

The Zebra Mussel is a non-native species accidentally brought to the Great Lakes in the ballast of ocean-going ships. The rapid proliferation of the species in their new freshwater habitat has caused a significant economic and ecological concern. Ironically, zebra mussels by all accounts have actually improved water visibility in the Great Lakes since their arrival here decades ago.