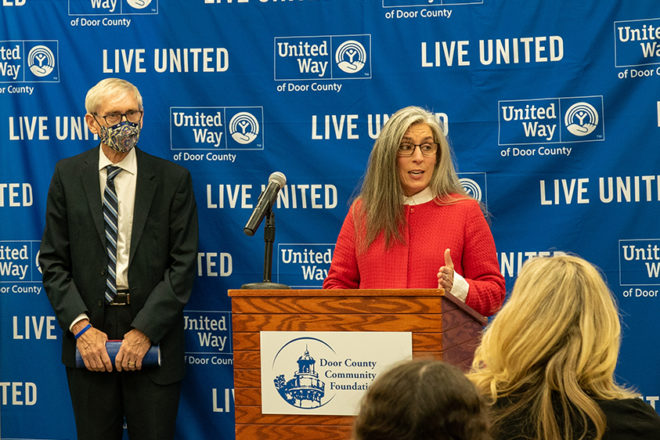 In June of 2020 parents of young children in Sturgeon Bay learned they were on the verge of seeing the city’s primary child care center close.

A community effort kept it open, and on Thursday, parents learned that a larger community effort is set to revolutionize child care in the city, and throughout Door County. That’s when Governor Tony Evers announced a $3.5 million grant to United Way of Door County from the American Rescue Plan Act in part to fund the construction of a new, larger center for the Door Community Child Development Center.

Evers pointed to the work of United Way and community partners over two years for making such a strong project for funding.

“It dealt directly with issues of child care and affordable housing. those are two really important issues,” Evers said. “But also, and this is hats off to United Way – they did a lot of planning and they intersected with a lot of people across the county. As a result of that they have buy-in.”

For Alexis Fuller, the director of DCCDC who worked with her sister, Bridget Starr, to plant the seeds to save the child care center in 2020, the announcement was transformational.

“It means we will be able to provide child care for many more families,” Fuller said. “It means we can serve the 30 families on our wait list.”

Northern Door Children’s Center will receive funds for renovations to its facility, as well as funding for succession plans to recruit and train its next generation of directors.

“Northern Door doesn’t have so much a capacity issue, but we need to renovate to make our space work better,” said Cindy Trinkner-Peot, director of the Northern Door Children’s Center. “We also need to find the next early childcare professionals that will replace me. We can’t keep people long enough because it doesn’t pay well enough and the housing isn’t there.”

The Door County Housing Partnership will receive a portion of the grant to support its affordable housing initiatives, and approximately $50,000 will go to the housing project of Paula Anschutz, the general manager of the Sister Bay Bowl who has saved old cabins from Little Sister Resort to create housing in Sister Bay. Some of that housing space will be reserved for child care professionals.

Fuller and Trinkner-Peot tipped their hat to Christina Studebaker, Community Impact Coordinator at United Way who wrote the grant and lead the organization’s child care initiatives for the past two years.

“Without her to bring it all together and think outside the box, this wouldn’t have happened,” Trinkner-Peot said.

Studebaker said the award is just the first step, but it’s a big step. She described it as a testament to reaching outside your own organization to find solutions.

“It’s very easy to be in your silo, but you have to push yourself to look for these connections,” Studebaker said. “I’ve lived in seven states and I’ve been here three years now, and in that time I’ve been able to connect to people and have meaningful conversations that lead to this. That is not the case everywhere.”

United Way of Door County is one of 12 regional organizations and projects that have been granted millions to develop long-term solutions to Wisconsin’s workforce challenges.

Gov. Tony Evers, along with Missy Hughes, secretary and CEO of the Wisconsin Economic Development Corporation; and Amy Pechacek, secretary-designee of the Department of Workforce Development, announced the awards this week.

The grant program is funded by $100 million in federal American Rescue Plan Act money directed by Evers to the Workforce Innovation Grant program announced earlier this year. The awards announced this week, of which the United Way of Door County grant is a part, are worth $59.5 million. A second round of grants will be awarded in 2022.

Among the projects – beyond child care expansion – funded during the first round of grants are implementing public-private partnerships to train and attract health care workers throughout rural Wisconsin; developing next-generation advanced manufacturing employees; creating pipelines for young, educated workers in Milwaukee; training construction and skilled craft workers throughout the state; fostering entrepreneurship in Kenosha; and enabling those who are incarcerated to earn undergraduate degrees from the University of Wisconsin.