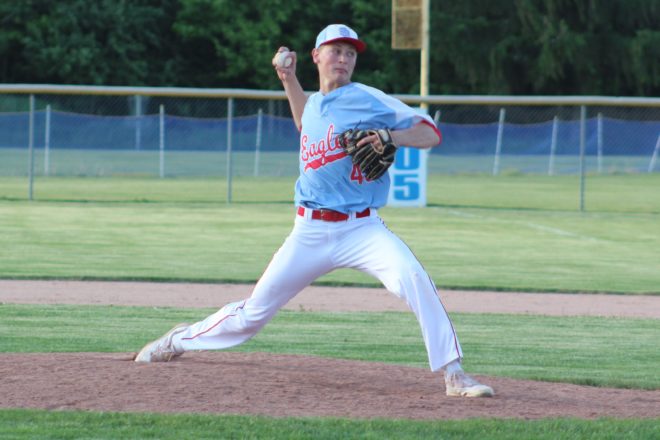 Only one Door County high school baseball team was able to advance to a WIAA regional championship game this season.

No. 1-seeded Gibraltar/Washington Island trailed by two runs after an inning and a half at home Tuesday, but then the team did the rest of the scoring on the way to winning its Division 4 regional semifinal over No. 4-seeded Sevastopol, 9-2.

The Pioneers, who opened the tournament at home May 26 with a 7-2 victory in their regional quarterfinal against No. 5-seeded NEW Lutheran, tallied only a run in each of the first two innings against the Vikings.

Sevastopol took a 1-0 lead after Carter Bieri scored from second base, tagging up on a flyout to the outfield and reaching home on an error on the throw to third.

The Pioneers went up 2-0 after Tom Junion led off the second inning with a double, advanced to third on a wild pitch and scored on a ground out by Drake Olson.

The Vikings got a run back in the bottom of the second when Kevin Krauel led off with a double, advanced to third on a single by Hayden Reetz and scored on a fielder’s choice by Will Friedenfels.

Gibraltar/Washington Island took the lead for good with three runs in the bottom of the third, which included a triple from Sam Lindenberg and singles from Ryan Jorgenson and Krauel to drive in the runs.

The Vikings added another run in the fourth inning, when Brady Kita tripled and scored on a double by Lindenberg. They then plated two runs in both the fifth and sixth innings.

Lindenberg recorded the complete-game victory, allowing both runs on six hits and two walks with a hit batter over seven innings, while striking out eight.

Jack de Young pitched the first five innings for the Pioneers and recorded the loss, allowing seven earned runs on 10 hits with two walks, while striking out one.

The Vikings advanced to host Wednesday’s regional championship game against No. 3-seeded Reedsville. The game was scheduled after this week’s edition of the Peninsula Pulse went to press.

Southern Door saw its season come to an end at home Tuesday when the No. 1-seeded Eagles lost their Division 3 regional semifinal to No. 4-seeded Brillion, 4-2.

The game was tied 2-2 after five innings, before the Brillion Lions scored a run in both the sixth and seventh innings.

The Eagles loaded the bases with two outs in the bottom of the seventh, but they were unable to score when a groundout by Logan Jeanquart ended the game.

Sturgeon Bay, which received a No. 7 seed in Division 2, lost its May 26 regional quarterfinal in five innings to No. 2-seeded Luxemburg-Casco, 12-0.