As a very young girl in Champion, Belgium, Adele Brise promised the Virgin Mary that when she grew up she would join an Ursuline Convent and work in the foreign missions. 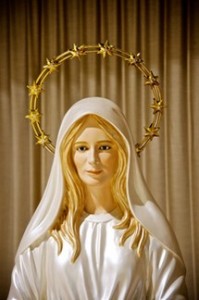 In 1855, when she was 24, her parents decided to immigrate to the United States. Adele was torn with indecision. Should she go with her family, or stay in Belgium and join the convent, as she’d always planned to do?

Her priest advised her to accompany her family. “If God wills it,” he told her, “you can serve God in the United States.”

The Brise family bought 240 acres in Red River in Kewaunee County, and Adele settled into the life of a dutiful farm daughter, supposing that her opportunity for mission work was over. But in the fall of 1859, as she was walking on a heavily-wooded Indian trail, carrying grain to the grist mill miles away, an apparition of a beautiful woman in a dazzling white robe and a crown of stars suddenly appeared between a maple tree and a hemlock tree near the trail. She did not speak and disappeared as quickly as she had come.

When Adele described the incident to her family, they decided it must have been a lost soul in need of prayers. The next Sunday, Oct. 9, Adele was taking the same trail to church with her sister, Isabel, and a neighbor. Again, the lady in white appeared between the same two trees. Only Adele was able to see her.

A little frightened and concerned, after mass Adele told the priest what she had seen. He advised her to return home on the same path and told her if the lady appeared again, she should say, “In God’s name, who are you, and what do you want of me?”

The vision appeared for the third time, Adele asked the questions she had been told to, and the lady answered, “I am the Queen of Heaven. Gather the children in this wild country and teach them what they should know for salvation.” 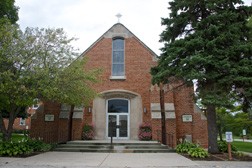 Word about Adele’s experience quickly spread through the countryside and was believed by most who heard the story. Her father built a little chapel on the site where the apparition had appeared, and for two years Adele walked to homes in a 50-mile radius, offering to do each family’s housework if they permitted her to teach their children the catechism. She also went on “begging tours,” asking for donations to establish and operate a school next to the larger chapel dedicated to Our Lady of Good Help that Adele’s father and others built in 1861.

St. Mary’s Boarding Academy finally opened in 1868 with 60 students, whose families paid tuition of $1 a week. It was the second academy in the Green Bay Diocese. Classes were held in French and English. Although “Sister” Adele never joined a religious order, she and the other women who taught at the school lived as a “third order” community or “tertiaries, lay people linked to a specific religious order.”

Many people believed in Adele’s visions, but there were some doubters. The events of Oct. 8, 1871, surely erased those doubts. After a very dry winter and summer, with fires burning throughout the area, a huge conflagration, the Peshtigo Fire, broke out. Southern Door County and northern Brown and Kewaunee counties were in flames. The Town of Brussels was destroyed.

As the fire approached their homes, with temperatures so high that many were cremated as they tried to escape, families who lived near the chapel fled there for safety. All night they prayed, processing around the chapel on their knees. Their prayers were answered when a downpour extinguished the flames. 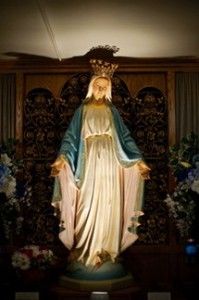 When dawn broke on Oct. 9, the twelfth anniversary of Adele’s vision, they found that the six acres on which the chapel and school stood were an “emerald island amid a sea of ashes.” The outside of the fence posts around the property were charred, but the insides were untouched. A million and a half acres had been destroyed, but they had been miraculously spared.

Two-hundred-and-fifty people died in the great Chicago Fire on the same date, and it quickly became a national news story. Between 1,200 and 2,400 lives were lost in the much-less publicized Peshtigo Fire, the most devastating in U.S. history, both in terms of the area it destroyed and the number of people killed.

In 1880, the trees between where the apparition of Mary had appeared were cut down to make room for a new brick chapel. More than 60 years later, when the 1880 chapel was taken down so that a larger chapel could be built on that spot, the stumps of the trees were revealed. A lower-level crypt now covers the stumps.

As at Lourdes, with which the Shrine of Our Lady of Good Help shares many similarities, crutches of those healed of their lameness stand in the crypt, and hundreds of devotional candles burn beneath the statute of Our Lady of Grace.

A 42-minute video, directed in 2011 by Ashley Cross, includes Adele’s story, the history of the shrine and testimony from a number of individuals who recount healing that they or relatives have experienced for which there is no scientific or medical explanation.

Adele Brise died in 1896 at the age of 66 and is buried beside her beloved shrine. Although her mission field was not where she expected it to be, she faithfully fulfilled the task set before her as a young woman.

A few years later, the Bay Settlement Sisters were sent to carry on her work. Sister Pauline LaPlante arrived at the school in 1902 to find two sisters, 20 children and 42 cents. She served there until her death in 1926, after which the facility was turned into a home for crippled children that operated for 20 years.

The story of Adele and the apparitions of Mary she saw continue to draw thousands of pilgrims each year to the Shrine of Our Lady of Good Help. Crowds gather especially on Aug. 15, the Feast of the Assumption, to join the Bishop in celebrating the day in honor of Mary.

In 2009, the Most Reverend David L. Ricken, Bishop of Green Bay, opened a formal investigation into the Marian apparitions that occurred in 1859. On the feast day of the Immaculate Conception in 2010, he announced the full affirmation of the church to the apparitions that appeared to Adele in Champion, Wisconsin, proclaiming them worthy of belief. It is the only Marian shrine in the United States that is on the site of approved apparitions of the Virgin Mary. (The town was previously known as Robinsonville, but Adele had suggested that the name be changed to Champion, in honor of the town in Belgium where she had once planned to join the Ursuline order.)

The mailing address of the Shrine of Our Lady of Good Help, which includes a restaurant and gift shop, is 4027 Chapel Drive, New Franken, Wis. Read more about it at shrineofourladyofgoodhelp.com or call 920.866.2571 for more information.