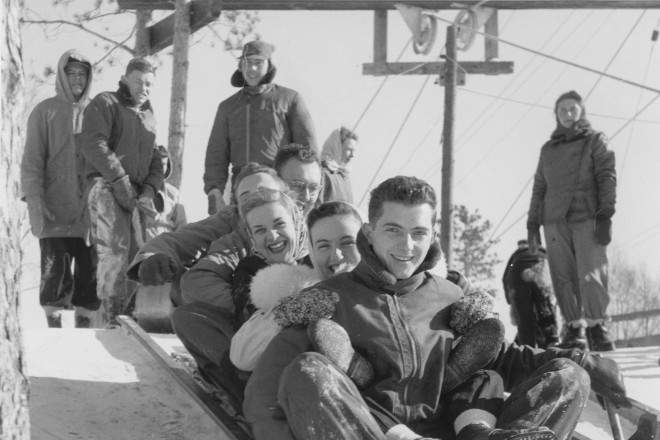 Many Door County locals experience a wave of nostalgia every time they drive past Little Sweden on Highway 42 between Egg Harbor and Fish Creek. A quick glance in the direction of those rolling hills brings back fond memories of a crackling fireplace, knit caps, seeing your breath in the cold air, lace-up boots and bear-trap bindings. Such memories exist because in days gone by, this location was the site of the popular ski hill Nor-Ski Ridge, where a generation of Door County residents learned to downhill ski.

Nor-Ski Ridge was built by Harold “Wink” Larson in 1960. As a youth in Door County, Larson was a ski jumper who also enjoyed skiing the natural slopes of the area. His love for the sport was further nurtured through his work on the ski patrol in Garmish, Germany while in the U.S. Army. Upon returning from his Army service during the Korean War, Larson sought to fulfill his dream of establishing a ski resort in his beloved Door County. With “hard work, a few heart breaks, and good friends who believe in you,” the plan for Nor-Ski Ridge emerged. Built on the site of the Lone Pine Hill ski jump, Nor-Ski Ridge offered eight slopes to appeal to skiers ranging in skill level from beginner to expert. There were several rope tows and a T-bar, along with extensive snow-making equipment.

Mitch Larson, Wink’s son and owner of On Deck Clothing Company, fondly remembers the time he spent at the hill. A genuine family operation, Mitch was often responsible for grooming the runs. Mitch’s mother, Audrey, ran the restaurant and Alpine Sports Shop in the Nor-Ski Chalet. Members of the extended family were also part of the operations; Mitch’s aunts and cousins participated in everything from running the lifts to peeling potatoes for the summer fish boils at the site. Thinking back on the ski hill’s glory years during the 1960s, Mitch recalls, “Nor-Ski Ridge was a gathering place, a family place. Quite simply, it was what we did during the winter in Door County. It is all about memories.” 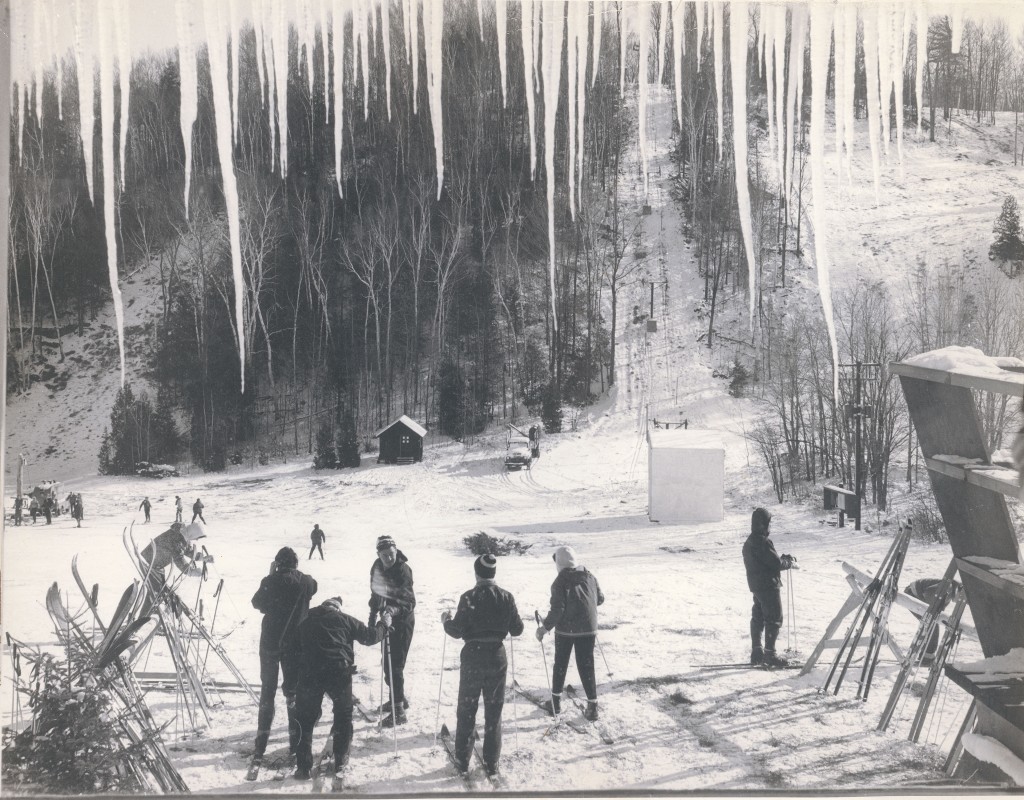 A glance from the chalet toward the ski hill. Photo by Wilmer Schroeder.

Nor-Ski Ridge became central to the establishment of the Gibraltar ski team, which sanctioned races and competed against other high school teams in Wisconsin. Two Door County locals who got their start at the hill, Gary Miller and Chris Hendrickson, went on to become assistant coaches on the U.S. Olympic Ski Team. But it wasn’t just locals who enjoyed recreating at Nor-Ski Ridge. Tourists from the Green Bay area and second-home owners from Chicago often came to enjoy their winter weekends at the hill.

In 1972, Larson decided to sell the property to a group of investors from Milwaukee who continued to operate the ski resort under the name Nor-Ski for several years. Another change in ownership followed and the hill’s name was changed to Omnibus. Later, the property was sold to Clemens Hedeen, himself a former Nor-Ski Ridge skier. While Hedeen’s initial plan was to retain the ski hill services, ultimately and for a variety of complex reasons, the project took another direction and became the residential development of Little Sweden, which remains on the property today. 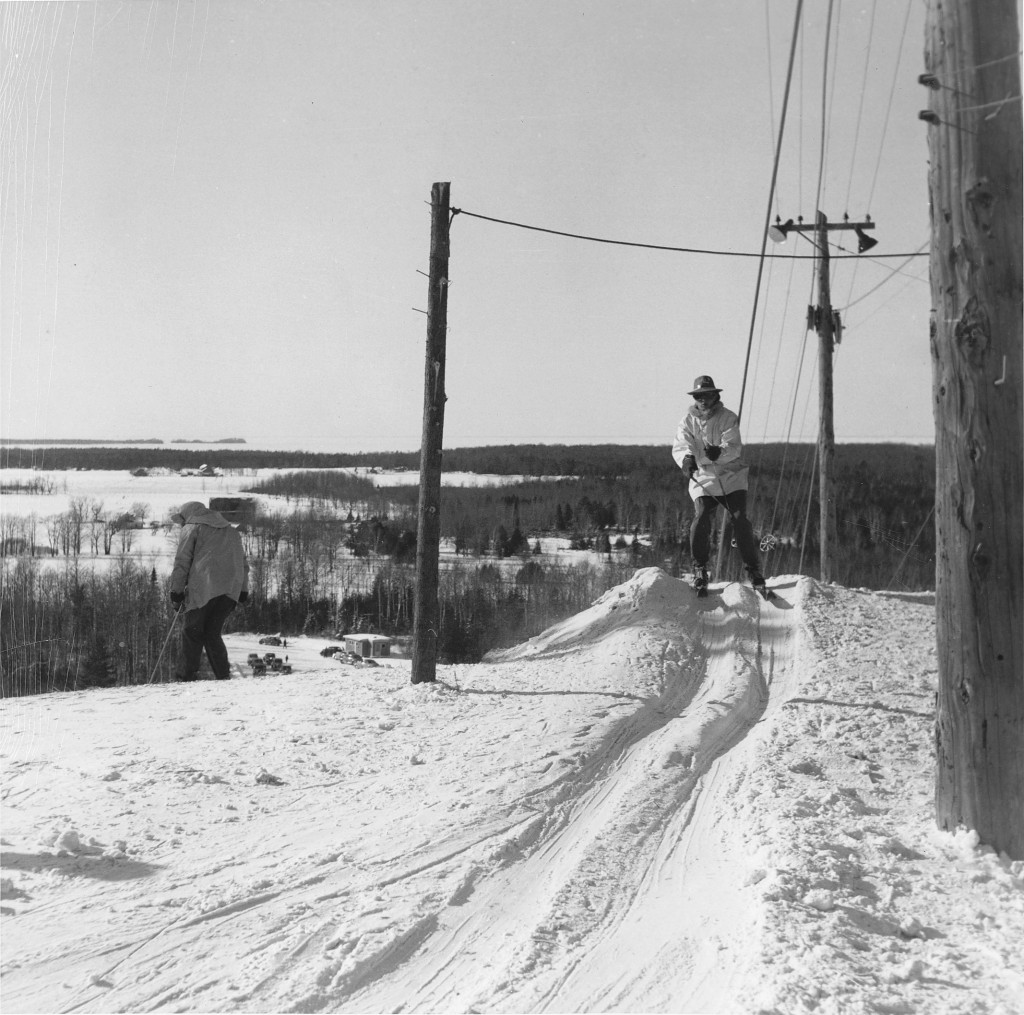 Getting to the top of the Potawatomi Ski Hill via tow rope. Photo by Wilmer Schroeder.

Another popular downhill skiing destination for Door County residents and visitors, with an even longer history of activity, was the hill at Potawatomi State Park. In 1946, a determined group of avid skiers joined together to create the ski hill and initiate a volunteer program in its support. The downhill ski runs became part of a Winter Sports Center at Potawatomi that also included ski jumps and toboggan slides.

“At that time, there was tremendous excitement about establishing a local ski hill,” recalls John Thenell, one of the program’s originators. “It was a family-centered program. You could take your children out to ski and enjoy the entire day with them.” 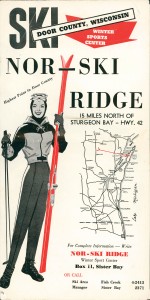 As school children during the 1950s and residents of Sturgeon Bay, Lee and Dick Grota were early members of the Sturgeon Bay Winter Sports Club. Lee remembers how, following each heavy snowfall, club members would assemble at a common location. There, a school bus would pick them up and transport them to the hill at Potawatomi Park. With skis on, the young skiers would walk the hill to pack down the fresh snow and keep it from melting. Their payment came in the form of free skiing for the remainder of the day.

Keeping snow on the south-facing hill proved to be an ongoing challenge. During a particularly low-snow year in the early ‘70s, club members attempted to make snow for the first time. Equipped with a snow gun but no water system, they used fire pumps to extract water from Sawyer Harbor only to have hoses freeze in the process. In later years, snow-making operations were made more efficient with the establishment of a pond and pump closer to the hill.

Throughout its history as a downhill skiing destination, the ski club at Potawatomi Park was completely volunteer-based. There were occasional races and events, but the club was 100 percent recreational, existing simply to provide residents with an opportunity to learn and enjoy this exhilarating winter activity. The hill was typically open to skiing on weekends and Wednesday evenings. Hours of operation were posted at the park, based upon availability of volunteers. 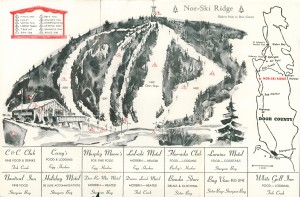 Thenell credits countless community members in facilitating the hill’s ongoing operation. There were local orchard owners and construction companies who contributed tractor and machinery time to maintain the hill, as well as people like Jack Murray and Tom Sekey who taught lessons, R.A. Stearn who designed the rope tow and toboggan run, and Don Baudhuin who was instrumental in getting the chairlift installed in the early 1980s.

Mike Asher served as the last acting president for the ski club, from 1994-1998. Asher has a fond appreciation for the hill, having learned to ski there himself at about six years of age. Regarding his time as a club member, Asher says, “Generation to generation, there was a tight core of people with one thing in common…we just went out to ski and had a lot of fun.” 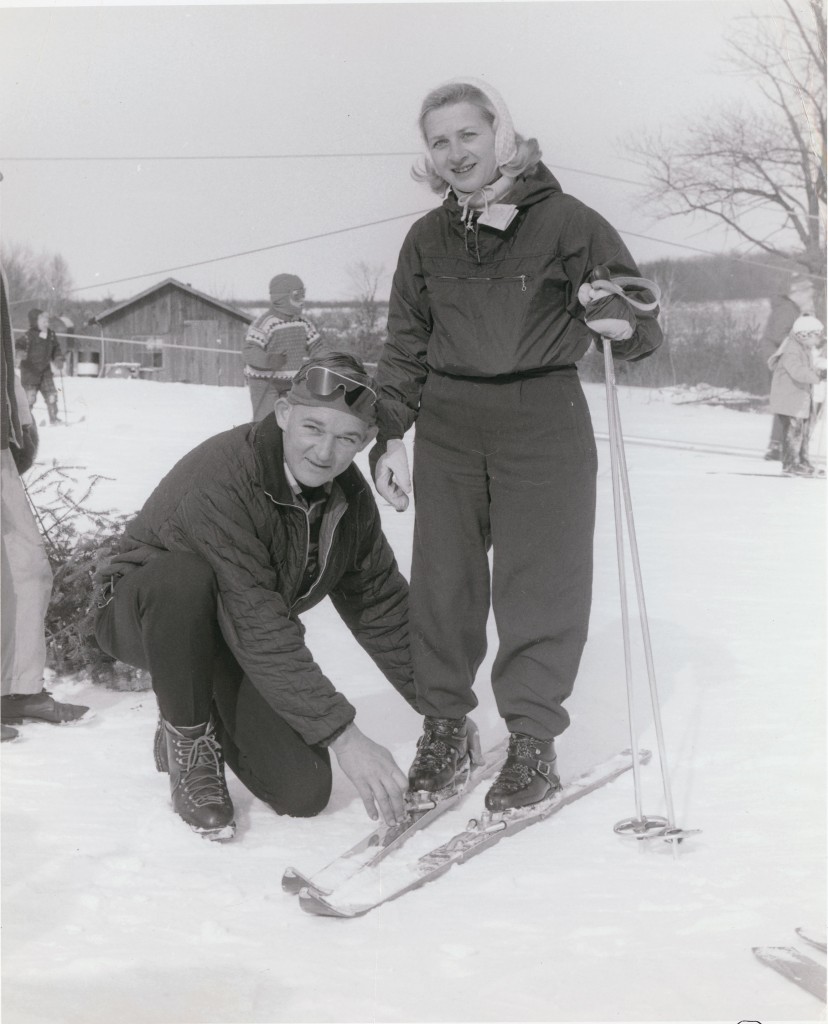 Asher enjoyed his work as a volunteer. “It was like playing Mother Nature, taking a bare hill and putting snow on it,” he relates. But managing a ski hill is a lot of work. In addition to snow making, there were lifts to maintain and hills to groom. Club members found themselves pooling their own money to cover maintenance expenditures. After a string of mild winters and a dwindling volunteer base, the 1997-1998 ski season was the last for the park’s ski hill. Potawatomi’s current park supervisor, Don McKinnon – himself an avid skier – commented on how he was saddened when the time came to take down the lifts, saying goodbye to an era.

Among those who grew up enjoying downhill skiing in Door County, there are many opinions about what led to the eventual demise of their beloved ski destinations. But regardless of whether it was market forces, land development, lack of volunteer support or global warming, there is one unifying sentiment:  they miss it just the same.