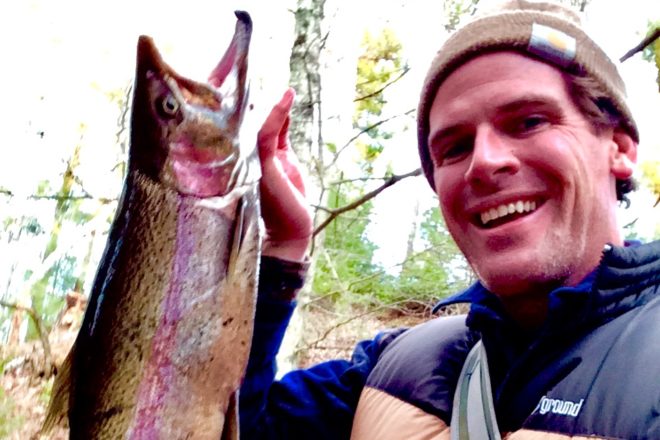 Returning home from a four-hour drive, and after a long week of work, I found myself melding with a big comfy chair in my living room. The late afternoon sun pouring in the bay windows and dog resting at my feet, I was comfortable and content. But this spring day had too much to offer and my wife Mary gave me side eyed glances as I fell in and out of sleep. “You know, I think I found a spot where there has to be fish, it just seems too perfect not to.” If it was her strategy for breaking my laziness, it was a good one. “Do tell,” I responded with a hoarse voice and a heavy eyed look. Mary is right more often than not, and I’ve learned to trust her intuition on most things, which will likely become all things in time. She described a creek, its width and depth, flow and pools, and finally its location. I looked it up on my phone, noting that it connected to the big waters of Lake Michigan. “There could be big trout in there this time of year, never fished it, but it’s possible. I’ll grab my fly rod.”

A few miles down the road, my fog lifted as we approached the site and my curiosity grew. Another truck was angled in at the entrance, with the telltale small cooler in the back. The warming sun hovered above the tree line and lit the arching cedars across the road, their glossy needles forming a marquee that showcased the trailhead. “This way, there’s trout…maybe.” Thirty steps in, and the temperature had dropped by 10 degrees. The tall canopy of evergreens acted as cooler lid, and the stream as the ice. The elevated trail was neat and orderly and did not follow the creek, which was swelling over its normal confines. The water was remarkably clear for having rained the previous three days. I could see small silver flies, twinkling and teasing above the surface of the fast flowing creek. 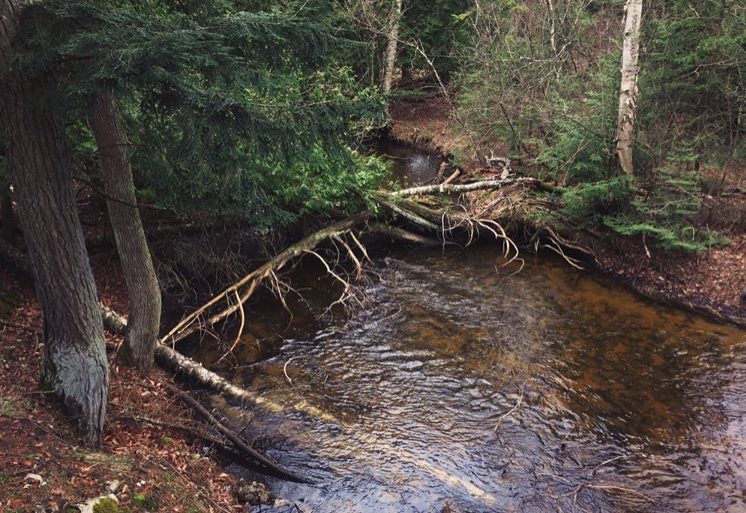 After walking for 10 minutes, I got my first good look. The creek averaged 20 feet wide and two feet deep, gin clear water loaded with fallen logs and large stones. Sharp bends exposed large limestone and dolomite walls, their sharp edges softened by moss carpets. I clamored to the creek’s edge and grabbed a few large stones to take a peek at their undersides. Small aquatic insects scurried around like tiny, slimy scorpions. These were stonefly larvae, a great sign of both water quality and food source. I went into my arsenal of flies and plucked out the closest match.

My first fish sighting did not take too long, but I could only make out the tail of what had to be a Steelhead (Oncorhynchus mykiss), which is the name given to migratory rainbow trout who spend most of their lives in the Great Lakes. They return to their home creek or river after a few years of traveling great distances in the big water. The fish was smartly placed, by no accident I’m sure, between logs and was offered cover by the leaves that were trapped floating on the surface. I quickly gave up on this fish in search of more.

To my delight I spotted a few more downstream, in a location where I had a fighting chance to land them. Without waders or a net, my chances were slim, but this is why I gave up that comfy chair. I offered the stonefly 100 times and got a few gracious looks, but no takers. I was balanced on a rotting log, which made digging into my over-the-shoulder fishing bag something of a circus act. I managed to dig out a fake rubber egg and placed it on a tiny bare hook. I might as well use a cheese curd, I laughed to myself. A delicate cast was rolled across the fast moving creek and the drift was perfect. The fish moved two feet toward the “fly” and the hook was set with an electric pulse that resonated from the headwaters out into Lake Michigan. The fight was long and exhilarating. Finally, the beautiful steelhead was landed and released after a few photos. 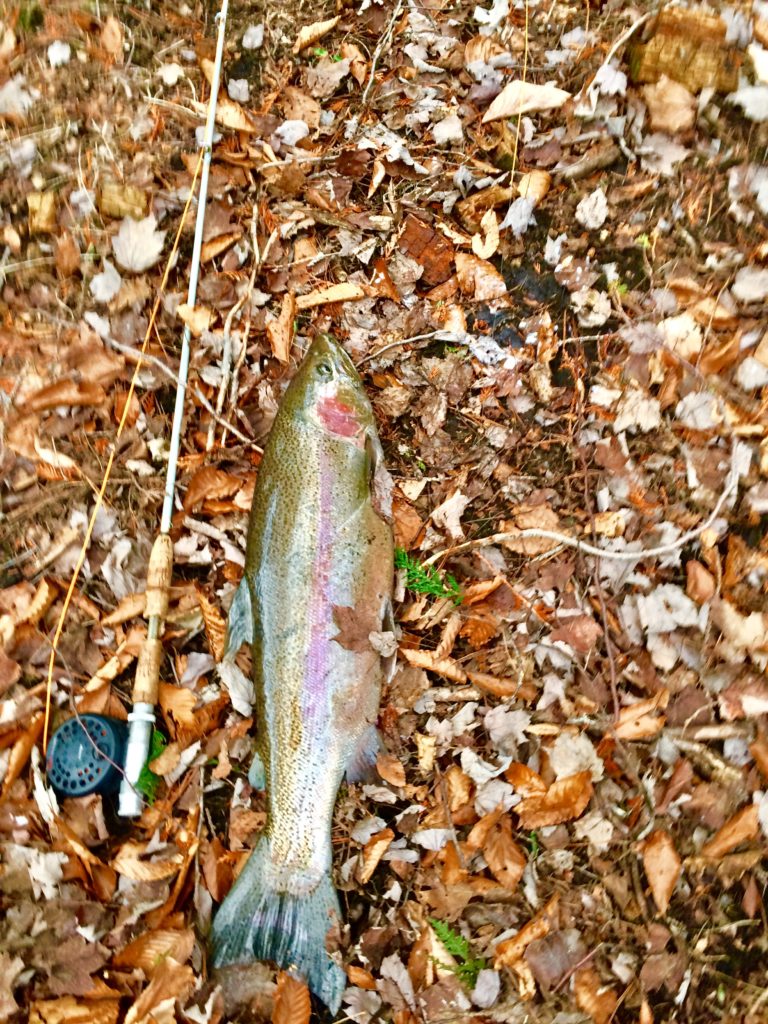 Plan your Earth Day celebrations with confidence this weekend! After some unsettled weather during the week, the weekend is shaping up to be a real springtime treat. A low-pressure system that brought April showers departs on Friday, opening the Door for abundant sunshine. High pressure settles in and we can expect average to slightly above average lows and highs. Gardeners should be able to relax with no freezing overnight lows. The Green Bay side will be noticeably warmer with light winds coming off of the cool waters of Lake Michigan.

Saturday: Mostly sunny, with a high near 51 and low near 38.