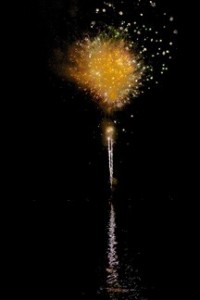 One of the best ways to celebrate a holiday weekend, the last hurrah of summer 2013, is listening, watching, swaying, and dancing to live music. I took in plenty over the long weekend and feel quite satisfied…and sore.

1. After a relaxing Friday night of eating too many fresh cherry tomatoes from The Pulse Garden, I started the day off at the beach on Saturday. I ate a sub from Sub Express and read Frankenstein – a beautifully written, extremely creepy gothic tale by Mary Shelley.

2. I meant to shower and change from my beach attire, but after running into a group of friends eating nachos at Husby’s The Garage in Sister Bay – I decided that was not a necessity.

We walked down to Marina Fest, ate ears of corn dripping in butter, juicy brats, and pints of Fat Tire as the sun set over the festivities.

Fireworks burst in the sky and Replica tuned their guitars in the big tent. 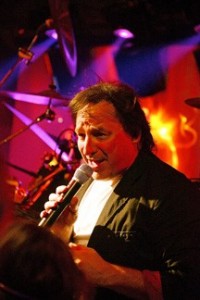 A few of my friends and I squeezed our way to the front of the crowd, tearing up the grass with our ‘80s dance moves, singing along to “Don’t Stop Believin.’”

4. From there we walked up the road to the Sister Bay Bowl, where Whiskey Ditch performed some classic tunes in dapper attire. We danced some more…and danced our way across the street…

5. The Nicks & Friends kept the dance floor hopping at Husby’s, performing such tunes as “Psycho Killer,” “Apeman,” and “Brittany’s Back.”

6. Dancing legs only mildly sore, I spent Sunday resting and recuperating. I showered, finally, and dolled up for Camp David’s final Fishstock concert of the 2013 season – where my friend and colleague Carol Thompson kept the beat for the opening act.

7. Eric Lewis took to the main stage, performing for a large crowd of all ages full on free corn, baked chicken, and homemade pasta salad and jalapeno bread. He wowed the audience with his picking skills and brought on a slew of his musician friends – Katie Dahl, Jimmy Davis, and Jeanne Kuhns to name a few. 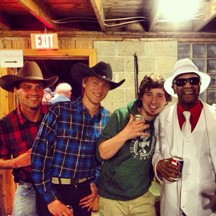 8. A special guest of the night was Earl ‘The Pearl’ Banks, an award winning blues artist from Tennessee. He performed some soul shaking blues and met with fans afterward – including these three visitors from Germany. (Yes, two of them are dressed as cowboys – they bought the hats in Wyoming and love them.)

9. I enjoyed a labor-free Labor Day: Good Eggs, Frankenstein, sleep, and a visit from a guitar-toting friend. He serenaded me with mellow versions of ‘80s classics – “Girls Just Wanna Have Fun” and “Manic Monday” – and songs from his favorite artist – Gregory Alan Isakov.

I unwound with some Red Apples Ale, a gorgeous sunset, and some crime thriller with Robert Redford…I can’t really remember…I fell asleep.