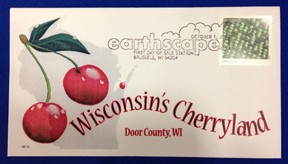 • A blossoming Door County cherry orchard will adorn envelopes across the country as one of the U.S. Postal Service’s new collection of Earthscapes Forever stamps.

The stamp, which shows a picture taken by Richard Hamilton Smith in a single-engine plane flying over a Brussels orchard, was celebrated at a ceremony on Oct. 1 at Southern Door School, where local politicians and stamp enthusiasts took turns speaking to the crowd.

“Each time you do, you’ll remind the world of the endless beauty of the Earthscape that surrounds us,” she said.

• At its Oct. 2 meeting, the Sturgeon Bay Common Council made a final approval of the detour route it will recommend the state Department of Transportation (DOT) use during next year’s Bayview Bridge closure.

An amendment was added to the route to ensure the DOT considers placing a traffic signal at the intersection of Hwy 42/57 and Egg Harbor Rd.

“The recommendation is for the state to put a signal up there for that three months only and take it down after construction’s done,” says Alderman Ron Vandertie.

Construction on the Bayview Bridge is expected to begin in April 2013 and end in June. It’s estimated an extra 12,700 vehicles a day will be coming through downtown Sturgeon Bay as a result of the construction.