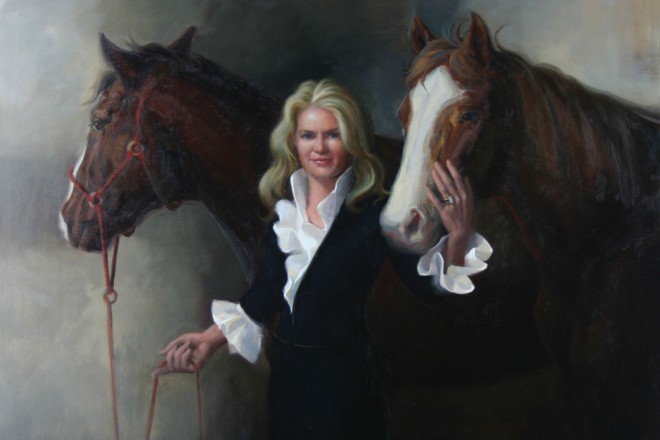 “I’ve been blessed with the instruction I’ve had,” says Craig Blietz, an accomplished still-life and portrait painter who lives and works in Liberty Grove. Glancing around his open, two-story studio at a handful of rich and alluring paintings, though, I can’t help but muse to myself: Instruction is always a plus, but can this really be taught?

I do my best to believe him, especially after seeing his resumé which includes study at the University of Denver (CO), the School of Representational Art (IL) and Harrington College of Design (IL); private study with Fred Berger, Richard Halstead and John Rush; and independent study across the globe. But I still suspect Craig’s being modest; there’s clearly an innate talent at work here, too.

Indeed, once I dig a little deeper, I learn that Craig has had a knack for drawing since childhood, a time when he had a special interest in cartoons and caricatures. “I got myself into a lot of trouble in school with caricatures,” Craig laughs, “and it’s debatable whether I ever grew up or not. It depends who you ask.” Since then, Craig’s work has evolved toward mastery of still-life, portrait and landscape painting – the kind of art that looks like it should be hanging somewhere in the Louvre alongside the work of the greats.

“I’m not sure when the button actually clicked and I switched to fine art,” says Craig, “but at one point I decided to get formal training. I had to commit to being an artist come hell or high water and I also had to buy in seriously to the idea of being by myself to make a career as an artist – I’m almost used to that.” Craig now produces about 30 to 35 pieces a year that “get a frame and leave the door.” Of those, about four are commissioned (usually portraits) and the rest are sent out to the four galleries that represent him – two out west, one in Michigan, and one here in Door County at Edgewood Orchard Galleries.

On this day, Craig is finishing a 48” by 62” oil on linen painting that hangs in the center of the studio’s east wall. I recognize the woman in the portrait from around town and, since I do, my appreciation for Craig’s skill rises even more than the average viewer’s might. The portrait is so dead-on it looks as though the woman and the two horses beside her might walk right out of the painting and gallop off into the picturesque meadow that just happens to be Craig’s front yard.

To the left of the painting is an equally large replica in black and white. On the west wall are two other much smaller replicas, one in black and white and one in color. I quickly surmise that this is the process. It starts with a thumbnail sketch, as Craig explains, or a “very cursory” first whack at a subject. Next, Craig makes the smaller black and white and color pieces which pre-destine what the final portrait will be, then the large sketch is made for scale, and finally the soon-to-be masterpiece I’m now looking at. “I practice the figure along the way,” says Craig, though I catch myself finding the word “practice” almost as hard to swallow as “instruction.” Each of the four pieces is so accurate and imbued with talent that I hope, for his sake, he’ll at least brag about what must be an extreme aptitude for patience.

But it’s not just the accuracy or the ability to make a subject appear true-to-life that strikes me about Craig’s art. There’s also what I would call, for lack of a better term, “mood” evident in his paintings. So I ask: How do you choose your subjects? How do you consider your subjects? Are these paintings meant to be philosophical statements or are they purely representational?

Craig’s answers get me closer to understanding where talent, patience, and instruction meet to create such captivating artwork. “I don’t know where it comes from exactly,” says Craig, “but I do think you have to pay attention to your obsessions. Those tell you what you should be doing. I read somewhere that one of the biggest time-wasters is an unclear objective and that really spoke to me. Being cognizant of why you’re doing it helps you answer questions throughout the process; if you can’t answer those questions, it all becomes directionless.”

With the portrait of the woman and her horses, for example, Craig indicates that it’s easy to be seduced by painting and the process. “I can get really into painting one of the horses and forget that it has to relate to everything else. The painting is meant to express this woman at this age. It’s not about the horses, but about her relationship with these two animals.”

In tandem, Craig emphasizes the importance of knowing what “intrigues you about a view.” Listening to Craig while looking at the meadow outside the studio’s front windows, I gain a better grasp of how his paintings are born compositionally. “There’s a center of interest, a secondary point of interest and then subordinate parts,” says Craig. “The color or texture of those grasses against the blankness of snow might intrigue me; then everything else gets taken away.”

As for whether his artwork is philosophical or purely representational, Craig comments, “Yeah, it’s representational, but so much of what’s beneath that is abstract. You hear a lot of ‘art speak’ about traditional painting and contemporary or conceptual paining being different, but I really think there’s more of a brotherhood than that.” Glancing again at the paintings in his studio, I’m convinced once more that it’s not just about the angles, colors, and perspectives – the things I imagine “instruction” would impart to an aspiring traditional artist. It’s about the ability to capture the likeness of a subject while revealing to the viewer just what is “intriguing about a view” – something most would agree Craig has a superior gift for.

Since first coming to Door County about 10 years ago, Craig has made a deserving name for himself. In addition to his painting schedule, Craig also commutes to the School of Representational Art in Chicago once a month to teach, is a faculty member and the Artistic Director of the Kewaunee Academy of Fine Art, and serves on the Peninsula Art School’s Board of Directors, among other things. Craig seems more than content to be in Door County and having finished his studio (completed in August of 2004) he shows no signs of leaving any time soon. “I enjoy just being here and doing it,” says Craig. “That sounds like a gutless answer, but it really is a privilege to do what I do.”