After 42 seasons at the White Gull Inn, Andy and Jan Coulson have decided it is time to start the next phase of their life together, and so have decided to put the popular inn and year-round restaurant in Fish Creek up for sale. 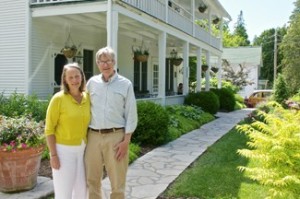 Andy and Jan Coulson have decided to sell the White Gull Inn in Fish Creek and transition to a new phase of their lives. Photo by Len Villano.

“We’ve never really given a lot of thought about the future,” Andy said. “We realized, of course, time is moving on. Over the last few years, we’ve become aware of the fact that we would probably be reaching an age where we should be thinking of retirement. That time has come now. We’re still both very active in the business, in good health and enjoy it, so we thought now would be a better time to do it rather than wait for a time when we might have to do it.”

Andy was 24 in 1972 when he borrowed $3,000 from his parents to join four friends in buying the White Gill Inn. Jan was 18 when Andy, who took on the title of operating manager, hired her to work at the Inn, which he says was one of the best business decisions he has ever made. The couple was married in 1975 and in 1981 became sole owners of the Inn.

“By having gotten into it very young, we really never had a lot of other work experience. Probably like a lot of small business owners, we just live and breathe it,” Andy said. “So it’s not that easy to let go. A lot of people say, ‘Why don’t you just take more time off? You’ve got a wonderful staff.’ And we do. Our staff is fantastic. We have great managers and are able to take vacations. But, if you’ve grown up in the environment when you have been there all the time, it’s hard to be an owner and not be there.”

Andy said while he and Jan have been talking about their retirement for some time, actually making the move to sell the Inn was a difficult decision because they felt a responsibility for their loyal staff and customers. The Inn has a staff of 40 part- and full-time employees year-round, and 70 employees during the busy season.

“I think the thing that kept us from doing it sooner is we love the people who come into the inn and we love our staff. Some of our staff have been with us 30-plus years,” Andy said. “So we are going to miss that contact with people. We feel somewhat of an obligation to all of them as well. We want to make sure that their future – whether they are customers of the inn or staff – is secure here and that they are able to carry on and be a part of it as long as they want. That is the part we think about the most. How do we leave it in the hands of somebody who’s going to carry on that tradition?”

In the meantime, even though the White Gull Inn is on the market, it’s business as usual for the Coulsons.

“I think that thing that occurred to us was we feel we’re going into uncharted territory, and we have no idea how long it’s going to take,” Andy said. “Day-to-day things are not going to change. We’re going to continue to work full-time at it. We’re going to continue to operate the inn as we always have. We are going to be there for the long haul, but we thought we should let people know we would be interested in talking to a potential new buyer, somebody who could continue on what we’ve been doing all these years.”

And should that buyer show up, what’s next for the Coulsons?

“We’ve talked a lot about that,” Andy said. “When you run a business, your life has a structure to it that everything else kind of weaves around the responsibilities of the job. We love to travel, we love to garden – we both have our own hobbies. I think we’ll be able to devote more time to those. Our three girls (Meredith, Emilie and Hannah) live in different parts of the world – Madison, Orange County, Calif., and New Zealand. We obviously look forward to spending more time with them, going to see them. And traveling on our own to other places, either places we’ve been and want to get back to, or places we’ve never been to.”

One thing will not change for the Coulsons. Door County will remain their home.

“We’re going to stay right where we are,” Andy said. “It’s been our home ever since 1972 and we wouldn’t think of ever leaving or moving. We have way too many friends here. Too much of our life is right here in Door County to consider leaving. Almost more importantly, it is home for our three daughters. They were all born here and grew up here. We’ve talked with enough people our age. When their kids have grown up, and they retired, they decided to sell the house the kids grew up in and moved to where they wanted to go. That’s a wonderful thing, but I feel when kids want to come home to see their family, they want to come home to the place where they grew up. With the girls all spread out, we want to have a place they can come back to, and, of course, that’s Door County.”