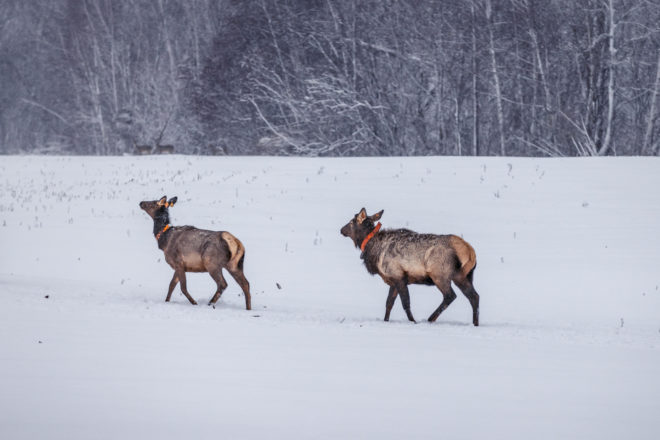 Many wild elk in Wisconsin carry GPS collars to aid researchers. This cow and her calf were seen earlier this month in northern Wisconsin. Photo by Jena Lindquist/Jena Lynn Photography.

If you want an outside shot at a once-in-a-lifetime tag to hunt elk in Wisconsin this fall, apply no later than May 31.

Despite abundant predators and occasional run-ins with vehicles, Department of Natural Resources (DNR) wildlife biologist Joshua Spiegel said the elk population is slowly growing. As of late winter, the agency estimated that there were 366 elk in the wild: 259 in the Northern Zone and 107 in the Central Zone. The total comprises 197 cows, 94 bulls and 75 calves.

Spiegel said predation on young calves can be high, with black bears taking the most, followed by gray wolves. Some of the older animals, 15-20 years old, also die during the winter because of poor body condition.

The DNR estimates a 60% survival rate on calves from previous studies, but it will be starting a new three-year research project this spring. GPS-collared cows will be tracked, and searches will take place from mid-May to mid-June to attempt to collar as many calves as possible.

Twenty-five elk from Michigan were introduced to the Clam Lake area in 1995. Michigan got its elk from Yellowstone a century ago, but its herd didn’t really take off until after habitat projects were completed during the 1980s and 1990s.

Wisconsin got a boost from Kentucky between 2015 and 2019, when more than 150 elk were relocated to the central and northern herds. Kentucky got its elk from six different states, and Spiegel said the influx of new genetics is paying off.

Vehicle collisions kill a number of elk each year (at least three so far in 2022), and seven elk were killed by hunters last fall. Ojibwe tribes harvested four bulls, including one raghorn and three spikes, and state-licensed hunters harvested three bulls – two of them mature and one spike.

Thanks to input from hunters and new scientific research, changes to the 2022 migratory bird hunting regulations include an updated definition of the Open Water Duck Zone boundary to include adjacent rooted vegetation, floating cattail mats and Long Tail and Little Tail points as part of the mainland shore; decreasing the distance from shore to 500 feet for the open-water restrictions on approved inland open-water hunting lakes; and allowing two scaup for the first 45 days of the season in the North and Open Water zones.

More than 1,400 hunters and other citizens provided input regarding the season proposals.

During the regular season, the bag limit will be a total of six ducks, including no more than four mallards (only two may be hens), three wood ducks, two black ducks, two canvasbacks, two redheads and one pintail.

The Door and Kewaunee County Deer Advisory Councils (CDACs) are holding their final recommendation meetings for the fall hunting season April 27. You can participate via Zoom (find the link at dnr.wisconsin.gov/topic/Hunt/cdac) or by phone.

Both councils are recommending three free antlerless tags with each deer license, an antlerless-only holiday gun deer hunt, and an extended bow and crossbow hunt. You can review meeting summaries, as well as county harvest and population metrics, at dnr.wisconsin.gov/topic/Hunt/cdac.

Habitat-management treatments, recreation and infrastructure developments, and other property-management actions are in the plans for Wisconsin state forests.

You can review plans, ask questions and comment by using the link at dnr.wisconsin.gov/topic/Lands/APIP/expanded.html.

The Cornell Lab of Ornithology, in partnership with two universities and numerous other partners, offers a free BirdCast Migration Dashboard that provides radar-based measurements of nocturnal bird migration.

The fascinating data includes estimates of the number of migrating birds and their directions, speeds and altitudes. View nightly data by county and state, and see color-coded maps of the U.S. forecasting the predicted hot spots at dashboard.birdcast.info.

Lake Michigan water levels have risen five inches during the past month, and as of April 15, they were 41 inches higher than the record low set in 1964. Water levels were down a foot from last April and more than two feet from the all-time monthly high, set in 2020. Levels are expected to rise about three inches during the next month.

Homeowners who are interested in protecting individual trees from the emerald ash borer can get information at eab.russell.wisc.edu. Forest woodlot owners can get some answers for their property at dnr.wisconsin.gov/topic/foresthealth/emeraldashborer.

The 2022 Wisconsin DNR and Wisconsin Conservation Congress Spring Hearing offered online input opportunities last week. Results, which are advisory only, will be posted at dnr.wisconsin.gov/about/wcc/springhearing as soon as they become available.

The DNR offers a pair of data-driven dashboards where you can view real-time and historical wildfires, as well as planned prescribed fire on public lands. Dig into the data at dnr.wisconsin.gov/topic/forestfire/fireManagementDashboards.

The first of six spring wild turkey hunting periods is underway. As of early Tuesday, there were only a few dozen leftover Zone 2 permits available for the final period in late May. More than 1,000 were sold during the past week.