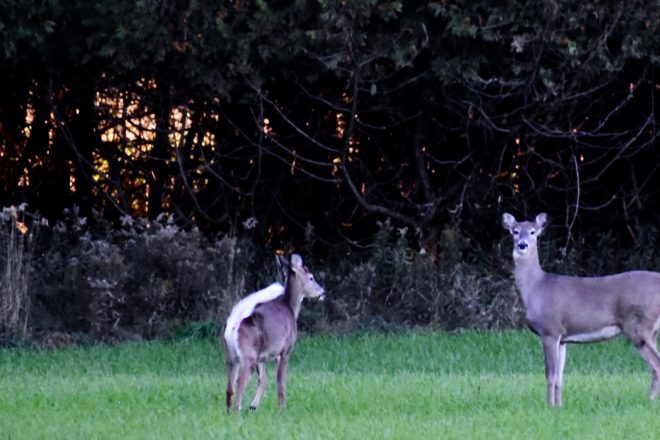 Hunters and drivers alike will likely see an increase in deer activity during the next few weeks as the annual whitetail mating season, or rut, heats up. Photo by Kevin Naze.

The annual deer rut heats up as November approaches

Whether you want to see deer or not, the next few weeks will offer an explosion of whitetail activity in the fields and forests.

Mature bucks in hot pursuit of does or scaring off smaller bucks are two reasons for a big increase in sightings. Another is that mature does start coming into heat. They chase off their current-year fawns while they spend a few days alone – or, rather, with one or more bucks hot on their tail.

Door and Kewaunee County sheriff’s departments are firing up their annual press releases, warning drivers to slow down and be extra vigilant on the roadways. Vehicle-deer collisions occur year-round, but the biggest surge is during the annual mating season, known as whitetail rut.

Through last weekend, hunters had already thinned about 800 deer from the Door-Kewaunee herd, but more than 95% of the whitetails are still on the hoof. Hunters are reporting a solid increase in rubs (on trees) and scrapes (on the ground): two telltale signs that bucks are getting aggressive.

The 10-day forecast calls for high temperatures in the 50s and lows in the 40s, which is better weather for hunting than last weekend’s unseasonably mild conditions.

By the time the last shot is fired – at the end of January in areas of the state with extended bow and crossbow hunts – it’s likely that well over 300,000 deer will have been taken throughout Wisconsin, with about 8,000 of them coming from Door and Kewaunee counties.

Meanwhile, it’s prime time for ducks and geese, and pheasants and wild turkeys have been luring hunters afield. Check all the hunt seasons at dnr.wisconsin.gov/topic/Hunt.

Just days prior to an Oct. 24 public meeting to gather feedback on salmon and trout stocking for Lake Michigan and Green Bay, the Department of Natural Resources (DNR) announced it was postponing the gathering.

Brad Eggold, the DNR’s Great Lakes District fisheries supervisor, said the agency was instead planning for a meeting sometime in December in order to have more time to gather public feedback. The DNR has reopened the public-comment period through Nov. 30, and its staff is willing to meet with fishing groups to hear ideas and discuss future management options.

To request staff presence at a future meeting, or to suggest any salmon- and trout-fishery management ideas, email [email protected].

The last in a series of educational hunting webinars hosted by the DNR will be held Wednesday, Nov. 2, 7 pm, for members of the public who are new to, or curious about, hunting.

The final webinar will share information about opportunities for new hunters to find hunting partners and mentors, and the audience can ask questions of the panelists. Bob Nack, the DNR’s recruitment, retention and reactivation team supervisor, said those tuning in will hear from hunters about their experiences of finding someone who took them hunting for the first time and who became a trusted source of information and direction.

All of the webinars are recorded and will be available online at youtube.com/watch?v=d4IV5ZymEMw.

If you want a shot at spearing a sturgeon in Lake Winnebago when the season opens Feb. 11, you’ll need to purchase a license by Oct. 31. The only exceptions are for military personnel who are home on leave during the spearing season and youth who will turn 12 between Nov. 1 and the last day of the 2023 spearing season.

Although there are unlimited licenses available for Lake Winnebago, the Upriver Lakes fishery is managed by a preference point system and is limited to 500 permitted spearers. The deadline for that drawing has already passed.

As of Oct. 21, lake levels were 37 inches below the 1986 record high. The lake has dropped about one foot during the past year, but six inches of that has been since mid-September.