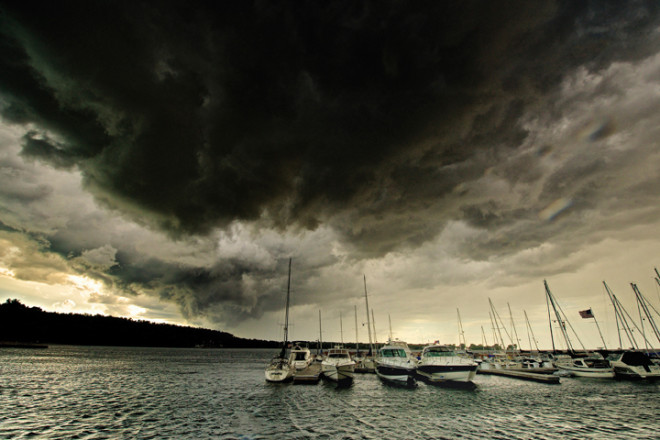 For many of us, autumn is our favorite season. We relish the changing colors of the foliage; the pumpkins, gourds, and cornstalks; and the cool crisp, star-filled nights. Yet for those who love being out on the water, taking in the beauty of the season from offshore, autumn can present unique challenges and threats that are unequalled in other seasons.

“Autumn is a transitional time between summer and winter,” explains Jeff Last, Warning Coordination Meteorologist for the National Oceanic and Atmospheric Administration (NOAA). “Low pressure systems develop across the Rocky Mountains and move across the Great Plains, into Minnesota, and across Lake Superior before tracking into northeast Wisconsin. The leading edge of these systems can create powerful winds or, in meteorological terms, a significant pressure gradient.”

As the movement of these pressure systems changes, the prevailing winds also shift with the season. The south and southwest winds of summer give way to north, northwest and westerly winds, which create increased risks for boaters, particularly in the Bay of Green Bay.

“Pleasure boaters – whether sail or power – have traditionally preferred the bay side of the peninsula because the water is warmer and shallower,” says Eric Lundquist, a licensed master captain and owner of Sister Bay Boat Rentals and Fish Creek Scenic Boat Tours. “But the prevailing winds of fall, particularly in October, can hammer the bay.”

Lundquist goes on to note that steady winds of even moderate strength can create substantial waves on the bay. “Variable winds over the course of 12 to 24 hours tend to cancel the waves out. When the winds are steady, from the west or northwest for 12 to 24 hours, however, the waves steadily build in size and strength.” 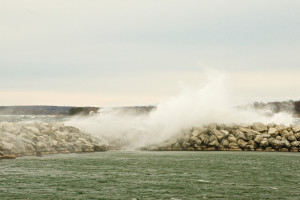 Last, of NOAA, concurs: “Steady winds of just 15 miles per hour that come from a persistent direction over an extended period of time – even on fair weather days – can create sizeable waves on the Bay of Green Bay.”

For Lundquist, who makes frequent trips out to Chambers Island with his Fish Creek Scenic Boat Tours, the high waves of autumn can mean that his boat can encounter trouble.

“You have to operate almost like an airline in the fall,” he says. “I have eight different weather apps on my phone and I am constantly checking them. We are watching for any type of alert or change in the forecast and we just generally accept that we may need to alter our plans at any time during the day.”

The challenges of autumn are much the same when it comes to crossing Death’s Door Passage on the Washington Island Ferry.

“Back when we ran smaller ferries and before the Northport breakwall (constructed in 1994) was built, fall weather could often be a real challenge,” ferry captain Dick Purinton says. “In those days a strong wind could shut us down; sometimes for more than a day.”

While they now run larger ferries and have the advantage of the breakwall, the autumn weather can still present challenges.

“When the wind reaches or exceeds 30 miles per hour, traffic considerations come in to play,” Purinton continues. “Depending on the conditions, we may limit the number of vehicles on the ferry, particularly taller, top heavy vehicles.”

He notes, however, that in addition to the improvements already mentioned, weather predictions through NOAA, the radio, and television have steadily improved, which makes the task of planning the crossing of the passage easier.

“Because of the improved forecasting we are able to prepare both our crews and our passengers for what to expect through any given day,” says Purinton.

“And I should note,” he continues, “that we maintain Friday night trips late into the late fall. But these can change or be cancelled because of the combination of weather and visibility. Obviously our sight is restricted at night, so departing from 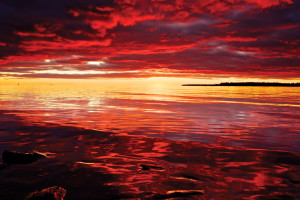 and entering docking is already challenging before we factor in rough weather.”

Although the Coast Guard responds to fewer rescue calls in the fall compared to the summer season, according to Tyler Goss, Operation Petty Officer for the United States Coast Guard in Sturgeon Bay, this is simply because there are fewer boats on the water compared to the summer. He notes that while the changing weather of autumn can present problems, the key to boating safety remains the same, regardless of the time of year.

“Planning in advance of going on the water is essential to a safe excursion,” he says. “Filing a float plan is the single most important part of going out on the water, whether you are in the Bay of Green Bay or out on Lake Michigan. If you deviate from your announced float plan let someone know about your change of plans. Communication is a key to safety.”

Additional safety measures include the required flotation devices, flares, and a cellphone. “If you’re nervous about taking your cellphone out on the water invest in a waterproof case,” Goss says.

He goes on to reference the mother and two boys who were out kayaking and were lost overnight for 14 hours this past summer. “If they had had a cellphone with them we could have located them in as little as 10 minutes through GPS. If they had had flares, we could have found them as soon as dusk fell.”

Both Goss and Last say that being aware of the sky and conditions while you are out on the water can go a long way to keeping you safe. Dark skies to the west, a sudden shift in wind direction, or a rapid temperature drop are all signs that the weather is changing and that you should seek shelter.

“And if you hear thunder,” Last adds, “you should get off the water as quickly as possible. If you can hear thunder, you can be struck by lightning.”

While the weather can change rapidly and the storms can be more severe, preparation, proper precautions, and common sense can keep boaters – regardless of the type of craft – safe on the waters surrounding the peninsula, where the spectacular scenery of autumn in Door County is most clearly on display. 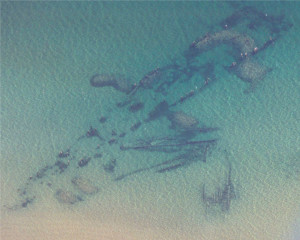 Among the violent Great Lakes storms of autumn, the “Alpena Storm” (named for the Goodrich Line steamer which was lost in the storm) of Oct. 16, 1880, stands out for its destruction and loss of life. By the time the storm ended, approximately 90 ships were wrecked or badly damaged and 118 lives were lost.

Oct. 15 was a pleasant day across the Midwest with temperatures ranging between 60 and 70 degrees. The storm began about midnight Oct. 16 with violent, gale force winds that persisted until midday on the 17th. Temperatures plummeted to freezing, with snow as far south as Chicago, and one of the earliest blizzards in Minnesota’s history.

The Alpena had left Grand Haven, Michigan, for Chicago on the 15th and was sighted several times during the course of the day. She never arrived in Chicago and, after several days of uncertainty about her fate, wreckage began to wash ashore near Holland, Michigan. The number of crew and passengers aboard varies in reports but generally the loss of life was at least 57 and possibly more.

Door County’s Lake Michigan shoreline saw a number of wrecks during the storm. The Ebenezer, a small two-masted schooner, was beached in Mud Bay (or Moonlight Bay) just north of Baileys Harbor, and the Perry Hannah, carrying a load of hemlock ties, became stranded close to the piers at Jacksonport. Another schooner, the Peoria, was also wrecked near Baileys Harbor.

Further north, a three-masted bark named Two Friends struck a reef at the north end of the peninsula. The crew took refuge in the ship’s rigging until a local fisherman could rescue them.