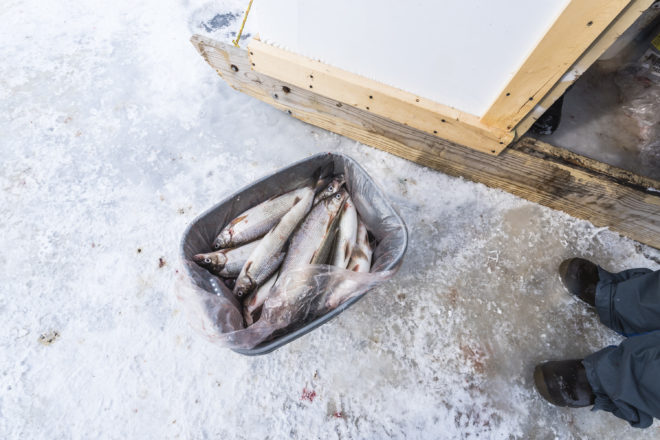 Freshly caught whitefish are about to be cleaned for customers of Trophy Ice Fishing. Photo by Len Villano

The University of Wisconsin Sea Grant Institute has some great information on whitefish on its webpage, but it comes to an abrupt and ultimately unsatisfying end with this sole “Fun Fact:”  “There is a popular ice sport fishery for lake whitefish in Green Bay.”

Hmmm. No links to anything to prove such a sweeping statement. And is Green Bay the only place to fish for whitefish on ice?

“Now we’ve got this big recreational fishery that is unprecedented and unmatched anywhere else on Lake Michigan. We’re talking about the whitefish ice fishing. The guided trip fishery has become a major entity,” said Scott Hansen, a Department of Natural Resources fisheries biologist.

“It’s kind of a modern gold rush,” he said. “In terms of whitefish, we have a world-class fishery.”

Goman was one of the first guides to take advantage of the winter whitefish boom on the Bay of Green Bay.

“I was working construction about 11 years ago. I would get laid off in the winter and started doing some guiding for walleye and perch,” Goman said. “I didn’t know about the whitefish too much. We started catching them accidentally, and customers were saying, ‘We don’t mind catching them. They’re good to eat.’” 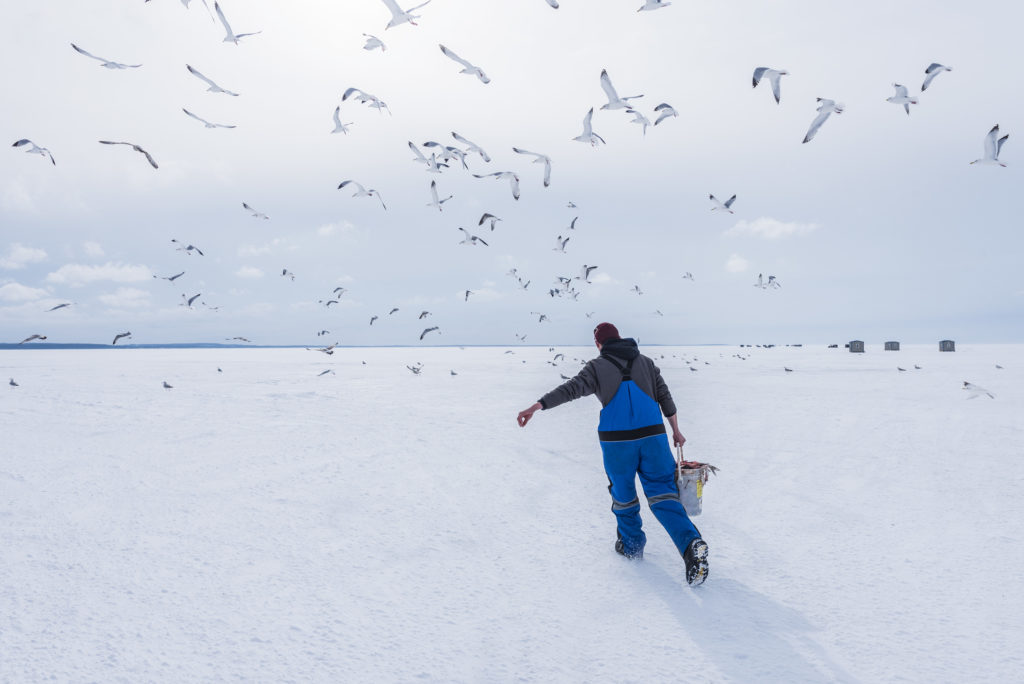 Gulls gather in anticipation as Trophy Ice Fishing employee Eli Hanks prepares to dump a bucket of fish guts on the ice. Photo by Len Villano.

That’s all he needed to hear.

“Nine years ago I built a couple ice houses to rent out. I was one of the first guys to build ice houses and rent them out,” Goman said. “They took off like wildfire. A few years later, everyone was doing it.”

Goman and his wife, Barbara, operate Green Bay Trophy Fishing until the bay freezes and they become Trophy Ice Fishing.

“The old myth of sitting on a bucket in minus 30, that’s old news,” Goman said. “We meet at a bar and grill. You’ve got a bathroom, you can grab breakfast. We give you a ride out. You have a gorgeous heated house, bathrooms on the ice, electronics, up-to-date gear, rods. It makes ice fishing totally different from years ago. It actually makes it enjoyable.”

On February 18, 2016 — a cold and very windy day — Jim Mecklenburg and Alan Graves were proving Goman’s point, comfortably ensconced in one of Goman’s shanties — or ice houses, as he calls them. A small village of shanties was erected almost three miles out on Sturgeon Bay, including one used exclusively by Goman’s staff, who efficiently cleaned all the whitefish being caught and, on top of that bloody task, cooked up a delicious fresh shore lunch of deep-fried whitefish for the customers.

“It’s great,” said Mecklenburg of Cudahy, Wisconsin. “I have my own equipment and ice fish as much as possible, but being able to do this with a professional guide is just such a great experience.”

“This is our second year in a row,” said Graves, of Greenfield, Wisconsin.

“The other reason I go for a guide is safety reasons,” Mecklenburg said. “I don’t know the lake. I have my own ATV and go to Milwaukee area lakes, Winnebago, but coming out here, no way.”

“Lonney and his guys do a good job. Really pleased,” Mecklenburg said. “I’d never done a guide experience until last year. Well worth it. I wanted to fish whitefish. If I came up with my own gear, I would have failed miserably.”

He mentions that his wife is an avid angler.

Whitefish feed on the bottom, so the anglers were jigging 94 feet of line to the bottom. When you consider that they were fishing in water that deep, with only 14 inches or so of ice separating them from that cold water, who could blame her?

But once you’re out there, it’s easy to forget you’re on a massive sheet of ice, especially when you are concentrating on getting your 10-whitefish limit.

“If ice can be safe, this looks like really safe ice,” Mecklenburg said. 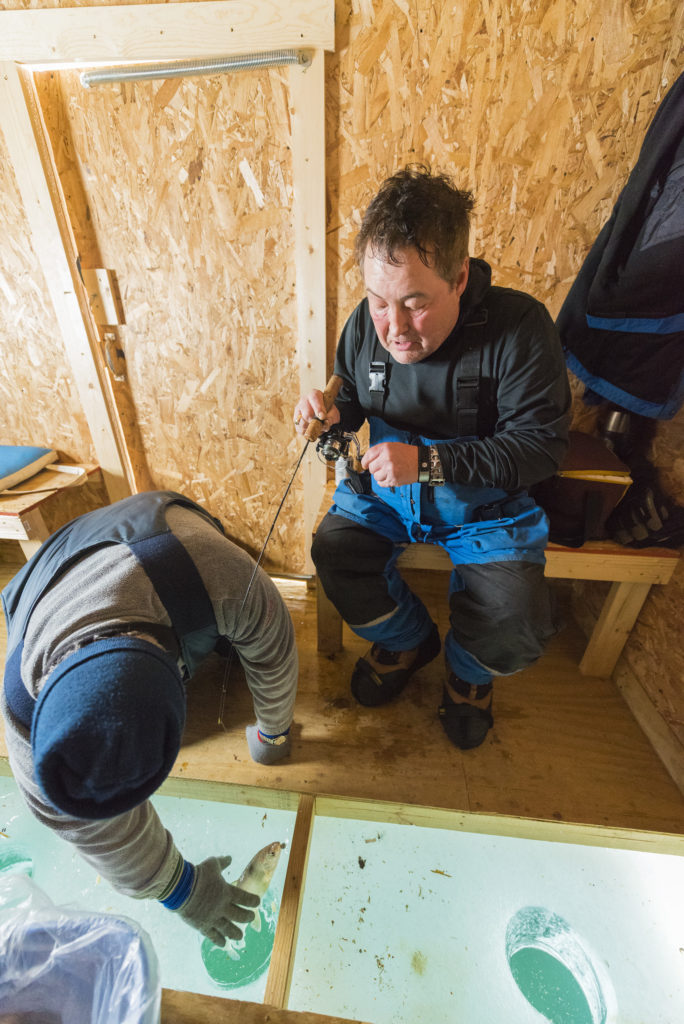 After Mecklenburg had a near miss with a fish, one of the staff guides on his rounds of the shanties popped in and noted that Mecklenburg didn’t have the jigging right. He took the rod and within a few jigs reeled in a nice whitefish, to the joy of all. “The secret,” he said before leaving for the next shanty, “is knowing when to set the hook.”

“A bluegill will make your rod go harder than these,” he said. “The whitefish are just such a light bite. You’re trying to mimic the movement of the goby. That’s what they feed on.”

Which comes back to the reason why these two guys and scores like them come from all over to dress for Antarctica and spend an entire day fishing on ice.

“They’re such a good-tasting fish. Excellent table food,” Mecklenburg said. “They don’t have a fishy taste. They’re just really good. This is what we came up for because it’s such great table fare.”

This was the second of their two-day fishing trip, and they had gone for the full ice fishing experience. Goman offers a package that includes fishing on the ice for walleye and whitefish, the walleye experience taking place early in the morning, followed by whitefish jigging from 9:30-ish am to 3:30-ish pm, and then returning for more walleye until dusk.

“I’ve never gotten one through the ice,” Mecklenburg said about catching a walleye. “With tip-ups, yes, but never with a jigging pole. So I’m hoping tonight.”

He added that this winter fishing expedition was a special one.

“I’ll be moving to Georgia in the spring so won’t be able to do this much,” he said wistfully.

We hope he got his walleye.

“It’s definitely real,” said Door County Visitor Bureau Communications and PR Director Jon Jarosh about the winter whitefish phenomenon. “It’s been an interesting thing to watch in the last five years or so. Whitefish has gone from a fish that nobody caught with hook and line — it was all commercial — to being the main species in the winter. Not that walleye and perch aren’t still caught, but whitefish is the dominant one caught. The people in the ice fishing business have just seen numbers explode.”

More importantly, the winter whitefish boom provides the visitor bureau with another marketing tool for the county.

“Nothing in life’s a guarantee except for death and taxes, of course, but we can be pretty much guarantee that there’s going to be ice on the bay in the winter,” Jarosh said. “We can’t always guarantee that there will be snow for cross-country skiing or snowshoeing or snowmobiling, but ice fishing is one of those things that we can almost guarantee you can do every winter. Promoting winter sports has always been a tricky one because we never know if there’s going to be enough snow. But with ice fishing, we can pretty much say there will be ice for ice fishing. From a promotional standpoint, that’s nice.” 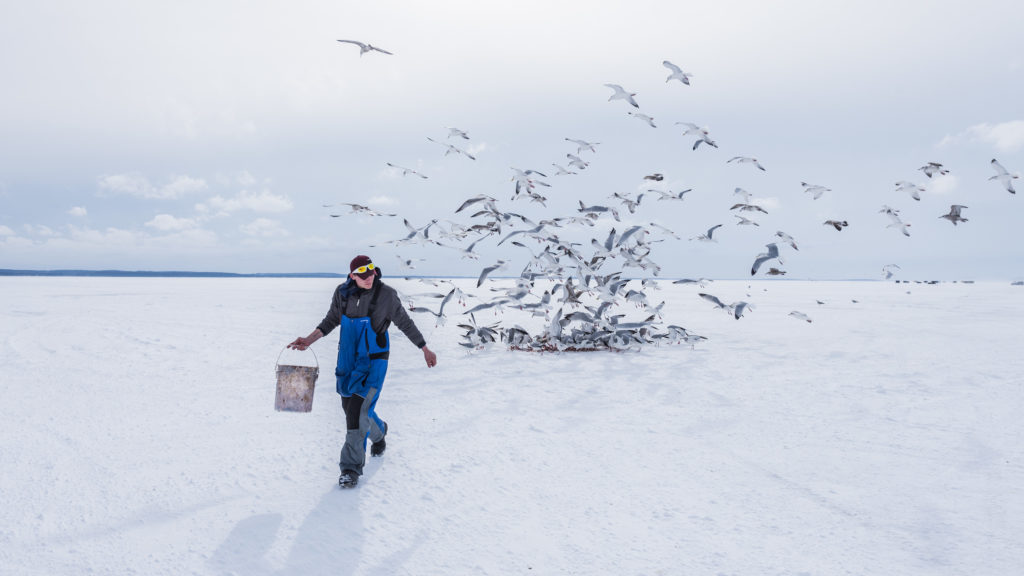 Jarosh is also in charge of providing opportunities to travel writers to participate in Door County activities.

“We offer it as an activity option on the winter press trip that we do ever year when we bring in travel journalists. That’s one of the most popular things we offer,” he said. “So many people have heard about it. Maybe they’ve seen Grumpy Old Men. They want to try it and see what it’s like, what it all entails. By and large, people are enthralled with it and how different it is out on the ice. It’s just such a different world being out there.”

Lonney Goman said there were a lot of bumps in the road for he and his wife as they established their winter ice fishing business.

“We learned our first couple of years through trial and error,” he said. “Then we started thinking, a lot of people coming here don’t know the area that well. So we developed a package and partnered with Beach Harbor and Howie’s Bait & Tackle. We do some stuff at The Lodge, Bridgeport and Stone Harbor, depending on what they want to spend. We have rates built right into our packages. It takes [away] a lot of headaches and stress of booking a trip. Barbara assists them with all of that. We have everything streamlined. It makes it real simple. That was years of trial and error and looking at what the customers responded to. Now we have customers coming back year after year. I would say 80 percent of our business is repeats. They like seeing me and Barbara and our guys. Our clients become friends over time.”

Important to the couple in building their business, they want to keep prices reasonable.

“We try to make it affordable,” Lonney said. “For some people, this is a dream trip. We’re blue-collar working people, too, so we try to make it more affordable. We put a lot of time and research into marketing and looking at numbers and meeting with our partners.” 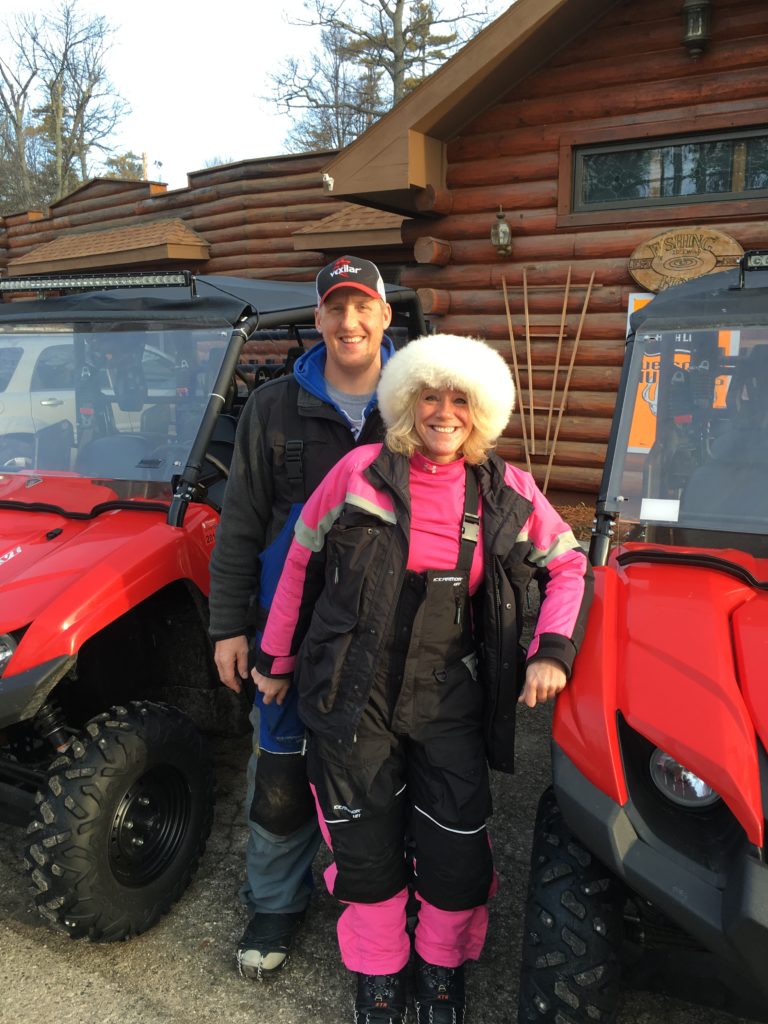 They have also developed some weekend packages, beginning with Whitefish Weekend on February 17 – 19, which begins with a fishing seminar at Sherwood Point Grill and then two days of fishing, a fish fry on the ice and two nights lodging for $265 per person.

The weekend after that is Women’s Weekend, featuring Barb Carey, founder of Wisconsin Women Fish. This weekend, too, begins with a fishing seminar.

“We instruct the anglers on jigging techniques, what they can expect when they go out and other basic information,” said Barbara Goman. “The numbers get high on those weekends.”

With close to 20 shanties, six UTVs and a half-dozen employees, Goman said his business is just about the right size.

“Bigger isn’t always better. We could expand, but we don’t want to lose our customer service, that personal touch,” he said.

Goman also has faith that winter whitefish is a long-term proposition.

“People say ‘What happened to the perch?’ I don’t think the perch were fished out by the commercial fishermen or the sport fishermen. I think the ecosystem changed,” he said. “It’s the same as the whitefish, as long as the food is there for them and as long as the population can sustain itself, it’s good, but it all depends on the ecosystem. So we’re going to give it heck right now until, hopefully, we retire. Either way, I think we’ll be good to go for years, but you always wonder how the fishery’s going to go.”