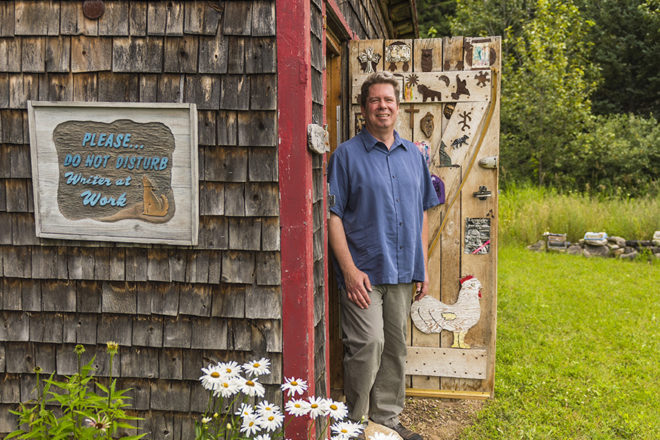 “In the summer of 2013 I took what many might consider a huge leap of faith,” Jerod Santek said. “And left my job as program director at one of the oldest writing organizations in the country to head this new center. It is the best thing I’ve ever done.”

After 19 years working with writers at The Loft Literary Center in Minneapolis, Minnesota, Santek became the executive director of the newly formed Write On, Door County.

He continued his studies as a graduate student at the American University, and enrolled in workshops and seminars, some of them offering him the opportunity to study with famous writers — at the 1997 Napa Valley Writers Conference with poet Jane Hirshfield, the 1999 Fine Arts Work Center fiction workshop with Michael Cunningham, and the 2001 Napa Valley Writers Conference fiction workshop with Dorothy Allison.

His awards as a writer include the Mt. Vernon Poetry Award in 1986, The Evelyn Swarthout Hayes Poetry Award in 1987, a Creative Writing Fellowship at American University in 1988, a Pushcart Prize nomination in 1995, and a Napa Valley Writers Conference Scholarship in 1997.

His poetry has appeared in Wind:  Literary Journal, Hayden’s Ferry Review, Folio, The Chronicle of Higher Education, Ploughshares, The James White Review, and in the anthology Things Shaped in Passing: More “Poets for Life” Writing from the AIDS Pandemic; his prose, in Passport:  Crossing Cultures and Borders, In the Family, and Blithe House Quarterly.

Despite his earlier creative success, during his work at The Loft, Santek learned that he found as much satisfaction in helping others become writers as he did in practicing the art himself.

“There are athletes who recognize that they may be better as a coach than a ball player,” he said. “I think the same is true in my situation.” But, he adds, because knees and elbows don’t matter for writers, “the game is still there for you when you are ready to return.”

“I got to work with so many amazing writers at The Loft, both emerging and established,” he said. “It was exciting to see people making a name for themselves and getting recognized.

“I was able to bring in some wonderful writers like Michael Ondaatje who wrote The English Patient,” he added. “And Tracy K. Smith, who is the current U.S. Poet Laureate.”

But Santek also takes pride in the achievement of lesser-known names. He worked with the McKnight Foundation to add a fellowship in children’s literature. The first winner was Kate DiCamillo; another winner he worked with was Kelly Barnhill, who was awarded the Newberry Medal last year.

“It’s exciting to see wonderfully talented writers receive recognition and climb maybe one more rung closer to fame,” he continued. “But it’s equally exciting to see people writing. To me, all of those people are famous.”

Subsequently Santek’s focus shifted to nonprofit arts management and community arts education, and at a Chicago conference he met Anne Emerson and Vinni Chomeau, who had attended with the express purpose of telling him about their idea for a writing school in Door County.

“It was like divine providence,” Emerson said, knowing Write On needed a director who had a background with authors who would lead to connections.

“He has quiet relationships with some of the finest writers in the country,” she said.

And now Santek has brought the project to fruition, attracting writers to Write On from all over the country. Nancy Carlson, Michael Perry, Margaret Hasse, Bruce Dethlefsen and Max Garland are just a few of the well-known authors who have come to the writing center.

The nationally renowned poet Naomi Shihab Nye was an artist in residence who worked with Door County high school students.

More than 100 local, regional and nationally recognized writers have been sponsored by Write On, offering workshops not only at the Juddville center but at venues throughout the county.

Santek’s mission at Write On is simple, he said: “To inspire people to write and share their stories.”

He quoted Sue Monk Kidd, author of The Secret Life of Bees: “Stories have to be told or they die, and when they die, we can’t remember who we are or why we are here.” Writing and reading help us understand the world and each other, he explained.

And good writing is alive and well.

“I think there are more people interested in writing today than ever before,” he said. “Writing a good story or poem is something we can all achieve. It doesn’t require specialized training.

“What excites me about writing today is not that anyone is going to become famous,” he continued, “but that people are going to write their stories down…Writing preserves lives.”

The upstart of Write On, Door County presented a number of challenges the board agrees have been met. Chomeau praises Santek as “a very gracious and thoughtful director,” and Emerson is pleased by “his devotion to nurturing writers.”

As Write On continues to flourish and grow, writing coach Santek knows the writing game is still there for him when he is ready to pick up his pen and return.