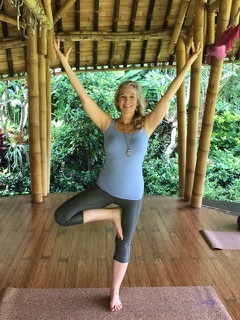 In 2000, Patti Coan’s yoga practice was born mat-to-mat in a small studio in Madison. Years later, while reading Patanjali’s Yoga Sutras, the Sanskrit term “Samāpatti” appeared, in yoga it’s a state of equilibrium or stillness of the mind. Coan’s path had been chosen for her.

On July 14, Coan will present two workshops at the Hotel Washington Studio on Washington Island. From 9-11 am, “The Eight Limbs of Raja Yoga” will explore the foundations of yoga in an enlightening, interactive workshop. “Finding Inner Peace through Relaxation,” an interactive workshop to explore powerful relaxation practices that will soothe the nerves, calm the mind and teach strategies to economize energy, follows from 1-3 pm.

Coan earned her yoga certification from the Himalayan Institute and founded Samāpatti Yoga in 2013. She has guided a wide variety of yoga practices for the past five years and has a background in learning and performance improvement as a leader, facilitator and coach.

The cost for each workshop is $40, or $75 for both. Coan will host a lunch between sessions in the Hotel’s restaurant, which is optional. Advance registration is recommended. To reserve a spot, and/or a guest room, call Hotel Washington at 920.847.3010. For more information visit hotelwashingtonandstudio.com.