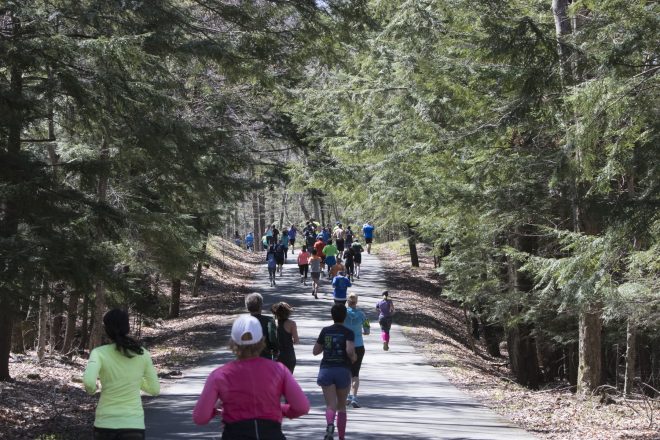 A half marathon means different things to different people.

For some, it’s an opportunity to travel, see new landscapes and make new friends. For others, it’s a chance to test their physical limits on a challenging course. Then there are those who use the experience to find themselves again after a major life change. And for the business owners in the community, events such as this offer an economic pick-me-up.

The Door County Half Marathon offers the opportunity for all of the above – and by design.

Blending the challenge of more prestigious race courses with the low-key vacation vibe and unmatched natural beauty of Door County, the Door County Half Marathon has grown into a sought-after hidden gem in the long-distance-racing world. Those who stumble upon it feel as if they’ve found something truly special, which is evident by the number of repeat runners the race attracts.

When David Eliot, one of the event’s founders, first discussed the idea for the Door County Half Marathon over breakfast at Al Johnson’s, creating a Midwestern version of the Boston Marathon was in his mind. Eliot grew up outside of Boston in northeast Massachusetts and recalls the annual race being considered more of a state holiday than a local sporting event.

“The state closes down for Patriots’ Day, and people travel into the city from throughout the state,” Eliot said. “It is a big party, and the state all pauses for the day to see who wins the race.”

Both Eliot’s wife, Krista; and Lars Johnson, owner of Al Johnson’s, had run the Boston Marathon and agreed having an event that captured the local community’s attention – while also showcasing the best of Door County to visitors – was extremely appealing. A little more than a year later, on Saturday, May 3, 2008, the Door County Half Marathon welcomed its first runners to the starting line.

The state of Wisconsin may not come to a standstill for the 13.1-mile run through Peninsula State Park, but over the years, it has earned a reputation as the unofficial start of Door County’s tourist season, prompting local businesses to hang their shingles a few weeks earlier than they used to. These runners fill hotel rooms, carb up in local restaurants and even do a bit of sightseeing and shopping before fueling up their cars for the drive home.

But equal in importance to kick-starting the local business scene was creating an event that touted all the professionalism of its more prestigious counterparts while maintaining plenty of local flavor.

That’s why choosing Peninsula State Park as the course location just made sense, according to Brian Fitzgerald, co-founder of the Peninsula Pacers, who was brought on at the start as the half marathon’s race director.

“I can still remember envisioning what the course could be,” Fitzgerald said.

The course begins and finishes at Nicolet Bay, offering impressive views of the bay as it hugs the shoreline before embarking on a few challenging hills throughout the middle of the course. And, because the certified course is located entirely within Peninsula State Park, Fitzgerald doesn’t have to worry as much about road construction changing the route the way organizers of races with courses that wind through city streets must.

As with so many other running events, the COVID-19 pandemic caused race organizers to make the difficult decision to cancel the 2020 event. Not knowing what early 2021 would bring, they decided to buy some time by turning this year’s event into a fall race, scheduled for Oct. 30, 2021.

“I look at it as the right decision because it was too early to put on an event of this size back in May,” Fitzgerald said. “Late October is really the only other time of the shoulder season – weather-wise and availability-wise – to host the race.”

Fitzgerald reasoned that the majority of the businesses that would participate in May are still open at the end of October.

“And, traditionally, this weekend would mark their last hurrah for the season,” he said.

Although Fitzgerald is excited for the event to return to the first Saturday in May in 2022, this year’s date change doesn’t appear to have negatively affected registrations.

“We’ll hit capacity,” he said, which, for a race that’s purposely kept at a midsize event, comes in around 2,000 runners for the half marathon and approximately 500 runners for the accompanying Nicolet Bay 5K. The race is expected to include a mix of rollover entries from 2020’s canceled race, some new faces – including those who are first hearing about the race and those who cannot train for or attend a spring race – and a few familiar faces.

Running for the Long Haul

Nancy Rollins is one of those familiar faces. She will step to the starting line of the Door County Half Marathon for the eighth time this fall. At age 74 and with 95 marathons under her running shoes, the Evanston, Illinois, resident has won the Door County Half Marathon in her age group several times before. Although she hasn’t set her sights on reclaiming that title at the end of this year’s race, she is looking forward to the challenge before her, especially competing three weeks after racing in the London Marathon.

“I’m usually pretty consistent within my age group,” Rollins said. “But, when you’re in your 70s, every year in your age group makes a big difference in your overall pace and performance.”

That’s why she approaches every race with a focused, but relaxed attitude. Yes, she is fiercely competitive with herself, but she’s also realistic. This year, in addition to being another year older, she’s also taking into account her recovery from some emergency surgery resulting from a bad fall in April 2020.

“I don’t get too far ahead of myself,” she said.

Rediscovering the Joy of Running

Katie Houle of Green Bay first ran the Door County Half Marathon in 2009. The challenging, hilly course coupled with spectacular views (the top of Sven’s Bluff is her favorite) hooked her immediately.

But what brings her back year after year is that the event made her fall in love with racing all over again after a major life change. Now, however, she’s no longer competing for her own time goals, but as someone who’s helping others to reach theirs.

“I started as a participant,” Houle said. “I love racing, and I love the challenge of trying to beat my time the year before. Then I had kids, and training at that competitive level just didn’t happen.”

Not wanting to give up her racing career entirely, she got in touch with race organizers to ask whether they were in need of pacers, more experienced runners who help set the speed — or pace — for the race with the goal of helping other runners accomplish a certain finish time.

“I’ll be honest: That was a hard transition,” she said. “I went from loving the competitive nature of racing to having a kid and trying to train and race. It changes things. But with pacing, the pressure was off of me.”

By shifting her focus away from her own racing goals and toward those of the runners she paced, “it reignited that passion for running and racing in me at a time I needed it most,” she said. “With pacing, the mindset is putting other people first. It’s not my day; it’s their day. I’m just there to encourage them along the way to do their best.”

Sometimes that’s as simple as asking runners what their goal is for the race. Other times, it’s giving them a few motivating words in the final miles, telling them to stick with you until the finish.

“There is so much enjoyment in that that I don’t feel the need to be competitive,” Houle said.

The pacer experience also gave her a newfound sense of belonging within the running community thanks to the camaraderie the pacing group shares.

“We come from all over, and we’ve all gotten to know each other,” she said. “For the most part, it’s the same group of people year after year because we all love this race and Door County so much. It’s kind of like a big reunion.”

A Place for All Runners

There is no question the spirit of camaraderie makes the Door County Half Marathon a perennial favorite among many runners, including Villa Park, Illinois, resident Bob Richards.

“It’s mostly the fun atmosphere and the mixed bag of runners from all around the northern Midwest converging to take on the challenge of Peninsula State Park,” he said.

The “mixed bag” of runners is truly that. Nearly 92% of runners come to the race from outside Door County, with 25% hailing from the Chicago area alone. About 6% have never visited Door County before.

Diversity also comes in the form of the age range the race attracts. At 72, Richards, who will complete his 9th Door County Half Marathon in October, runs alongside other age-peer competitors, a handful who are older and those who are young enough to be his children or even his grandchildren. It’s that diversity – both in the makeup of the event’s participants, as well as the course’s physical challenges and scenery – that helps make this race stand out on Richards’ crowded race calendar.

“Each time I run [the Door County Half Marathon], it’s like I’m hitting my reset button, ready to take it all in all over again.”