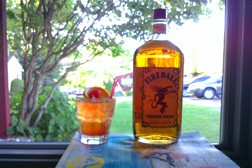 Last summer I took my five-year-old daughter Arielle to the Egg Harbor Fun Park with my friend and fellow bartender Bradd Sniadanko. We did most of the fun things you can do there – round of mini golf, raced go-carts, a little competitive skee-ball, played all the games in the arcade.

After a couple of hours of fun, Arielle and I were leaving and she turned to me and said, “Daddy, I really like toast.”

“No, not that kind of toast Daddy. Your friend Toast,” she replied.

“Oh, I thought his name was Toast.”

“Sweetheart, why would you think his name is Toast?” I asked.

“Well that’s what you called him.”

She said, “When we were racing go-carts you turned to me and said, ‘This guy’s toast!’”

And that is how Bradd became known to all as Toast, nicknamed by a kindergartener at a fun park. Just the way nature intended it to be.

Enjoying my cinnamon toast at breakfast a few weeks ago after a sterling round of golf at Maxwelton Braes Golf Course, I mentioned to Toast the drink a visiting Chicago bartender had recently ordered. She asked me to make her a Fireball Old Fashioned Sweet and said it was the “hot drink” among her coworkers at a busy downtown nightspot.

Fireball Cinnamon Whiskey is the most popular of the many cinnamon-flavored spirits currently on the market and most bars have many choices – Jim Beam Kentucky Fire, Red Stag Spiced, Jack Daniel’s Tennessee Fire, Goldschl?ger, and Cinnabon Vodka just to name a few.

Most bartenders in these parts “muddle” each Old Fashioned to order. That is how we do it at Mojo Rosa’s. “Muddling” for an Old Fashioned is the very simple but important act of building this drink properly. Using simple syrup is preferable but for this home version a singular sugar cube will work great.

To muddle: drop a sugar cube in the glass and add three dashes of Angostura bitters on top of it. Break up the sugar, add one or two Maraschino cherries and half an orange wheel. Lightly muddle (squish) the mixture just enough to break apart the fibrous pith of the fruit.

The initial flavor of this drink is a clean cinnamon bite, then the warmth of whiskey, and finishes sweetly. The classic Old Fashioned rules apply so you’ll know you’re enjoying the quintessential Wisconsin drink. This is a great drink now, but it will probably taste better in October when the weather is cooler. Enjoy your new cinnamon challenge!

half an orange wheel