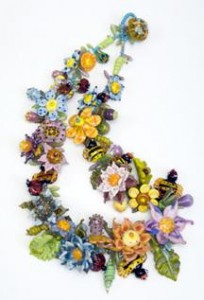 “You can start pretty reasonably, but once you get started, you always want a bigger torch,” says Appleton artist Beth Wenger Johnstone of lampworking, her primary craft. Johnstone’s work will be featured in a demonstration and trunk show at Ephraim’s Fine Line Designs Gallery on Saturday, June 27.

Though Johnstone’s art is called “lampworking,” she actually makes glass beads; the term is a historical holdover from an era when artists used lamps to mold glass into various bead shapes. These days, lampworkers like Johnstone use propane-oxygen torches to melt colored glass rods around a mandrel, creating the central hole that qualifies a glass piece as a bead.

Johnstone uses tools made of graphite or tungsten (materials that don’t stick to hot glass) to mold and decorate her beads. Once created, she puts many of her beads immediately into an electric kiln. This process, called annealing, heats the glass enough to relieve many of the internal stresses that make glass fragile, resulting in a stronger final product.

Johnstone uses both molding tools and color layering to create beads in a wide variety of shapes. The medium of glass lends solid beads an air of liquidity and toes the line between transparency and opacity, resulting in beads that are unique and bold in both color and composition.

“I like to take nature and put a twist on it,” Johnstone explains. For instance, she makes “a lot of flowers, but they don’t look like anything that’s real.” Johnstone also makes beads shaped like mermaids, fairies, and a variety of animals.

Beads can take anywhere from a couple of minutes to an hour and a half for Johnstone to produce, depending on the detail and form of the bead. 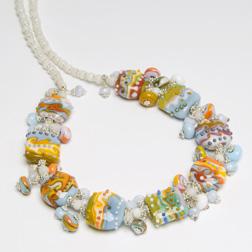 “It’s like drawing,” says Johnstone. “I just draw with glass. I can go really detailed or not that detailed.”

Johnstone puts together her beads into a variety of forms that she broadly categorizes as “jewelry and doodads,” including bracelets, necklaces, pendants, ornaments, and other objects. She often joins them with microfilament wires, which are stronger than string and less likely to be worn down by the sharp inside edges of the glass. Johnstone also occasionally uses precious metal clay, a mixture of clay and silver that is molded and then fired, burning away the clay and leaving only the shape of the silver.

Though lampworking is an involved and time-consuming task, Johnstone does this work in addition to her day job as a graphic designer and co-owner of WM Design. She calls lampworking “a serious hobby.”

“It’s my mental health activity; it’s the thing I do,” Johnstone says – then adds wryly, “definitely more than cleaning the house.”

Johnstone comes from a family full of artists and craftspeople; various members of her family are involved in ceramics, quilting, lapidary, and silversmithing.

“We are all serious arts and crafts people,” says Johnstone of her family. “None of us will ever have a problem with retirement. I give my parents credit for that, because they never let us sit and watch TV unless we were doing something.”

Though she’d “always been interested in beads,” Johnstone didn’t become involved in lampworking until she bought a day of marble-making from a glassblower at a church auction.

“We did more beads than marbles,” Johnstone remembers. “I loved it; it was great. It took me about five years to get the equipment and get set up, but that was kind of how I got started.” 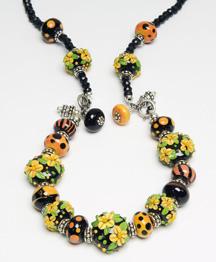 Now, Johnstone not only makes her own beads, she also teaches other people about the techniques she uses. She is on the board of and leads classes at the Bergstrom-Mahler Museum, a glass museum in Neenah, and keeps her own technique up to date through membership in the International Society of Beadmakers. She also shows her work in several galleries, though Fine Line is the only place in Door County where her work is shown.

This weekend’s trunk show at Fine Line offers Johnstone an opportunity to do one of her favorite activities:  to talk to other people about her work. She will even bring her torch to do in-person demonstrations of how the beads are made.

Aside from the significant safety concerns that come with any kind of torch or metal work (proper ventilation, for example, is vital to prevent buildup of dangerous fumes), Johnstone says that learning the basics of beadmaking is “not that hard.”

She continues, “It’s not one of these activities that everyone is jumping to do because there’s a fear factor with the fire, but [I think] it’s very addictive.”