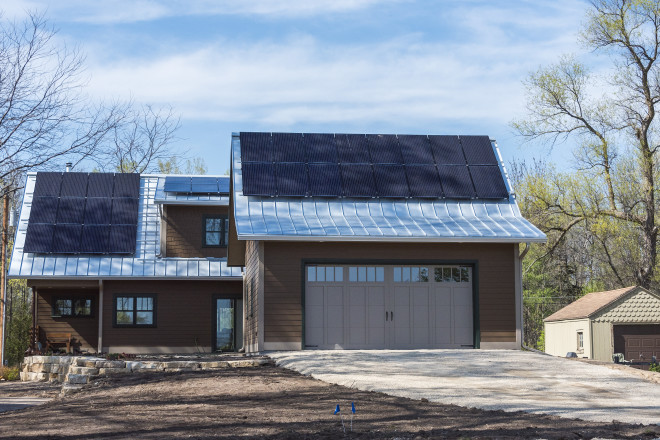 A very public transformation took place recently on Alabama Street in Sturgeon Bay when a drafty summer cottage sitting on a canal to the bay was carefully torn down and a sturdy, super-efficient year-round home was erected in its place. 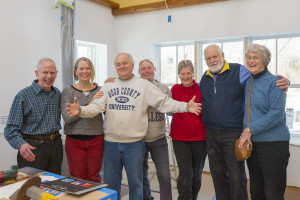 “The old house was cute and everybody loved it, but there was no insulation to speak of. It was just terrible,” said Chris Kellems, owner with her husband, Dave, of the home at 120 Alabama Street.

“It was a cold and uncomfortable home,” said Dave Kellems, reciting a litany of deficiencies with the old home, from leaky roof to bad electrical.

“All of those things pushed us to the edge,” he said. “It was in the stars for us to bring it up to date.”

Up to date is a bit of an understatement for what is only the second LEED Platinum home in Door County. The first was built in Gills Rock in 2013. Both were designed by Sturgeon Bay architect Virge Temme.

“People are craving information about how to build energy-efficient homes,” Temme said. “Not only can you do this, but you can do this fairly inexpensively, less than two percent of the total construction cost.”

The summer cottage was built by Chris’ father, Adam Kreuter. The Kellems lived in Redwood City, California, where Dave owned a business and Chris painted on a large scale, as in houses, not canvases. After the kids were gone and retirement loomed for them, the Kellems talked about moving to Sturgeon Bay.

“We had been talking about it for years,” Dave said, “but to say, let’s go ahead and get started, I had to sell my business, and I had a secondary business that took a year or two to wind down. So now we know that’s coming to an end.” 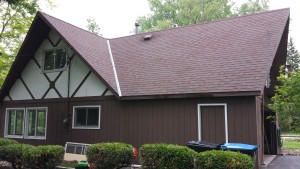 They were visiting Chris’ 98-year-old father at Christmas in 2013 when they decided it was time to make the move and get started on the house.

“He didn’t relish the idea of us tearing down the old house he had built,” Dave said. “He had memories he wanted to keep. I had to sit down with him, and say, you’ve been here for 40, 50 years. You always wanted us to live here. We want to live in a new version of your old place. We showed him what we planned. Virge had made up a nice rendering.”

The couple started emptying the house in June 2014. Adam Kreuter died on August 1, 2014, at the age of 99, without ever seeing his daughter’s green dream home.

“He was able to see some progress,” Dave said. “He would come by with tears in his eyes, but we just said, ‘We’ve gotta move on with our lives.’ At that time he was getting to the point, one week he was driving his car and the next week he was a gone. It was that quick.”

After paying a $400 heating bill for the month of February 2014, the Kellems knew they wanted to make the house energy efficient, but when they hooked up with Temme, they knew they wanted to go all the way with LEED Platinum certification. By June of 2014, they had signed with Ahnapee Construction of Algoma to do the build.

“They have done a fabulous job,” Chris said.

“Resistance to change is the number one reason. It’s a habit to do it the old way,” he said. 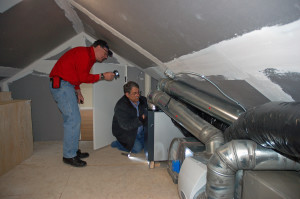 Bryan Neubauer, owner of Ahnapee Construction, said he first started learning about green building techniques six years ago at a trade show, and wanted to use the techniques to make his own home more energy efficient.

Four years ago, he met Temme.

“She is a big advocate for green building and energy efficiency,” he said. “Once I built one home with her, I loved it. I loved learning the more advanced way of doing things. It was more interesting to me than just doing a standard home. It was a bit of a challenge. It’s a whole new way of doing things. We have 11 people working for us. It takes a lot for my foremen to change the way they’ve framed 15, 20 years. Now I’m teaching them and Virge is teaching them how to reduce all the extra studs that aren’t needed.”

The old house meant a lot to Chris because her father had put a lot of himself into it. Because of that, the Kellems largely took the house apart by hand, recycling what they could for themselves and finding others who could use most of the rest of what came down.

“What you’ll see is a lot of material salvaged from the house,” said Temme. “When you walk on the drive, you’re walking on the original slab for the house. We crushed it so it didn’t have to go to a landfill. Chris and Dave manually tore this house apart and salvaged wood and beams and doors and cabinets. What they couldn’t salvage they either sold or donated to Habitat for Humanity, and the rest went to a building materials recycling plant in Oshkosh.”

“We salvaged as much as we could. My dad had made a lot of it,” Chris said. “It was like, you know, there’s no reason to throw this stuff away.” 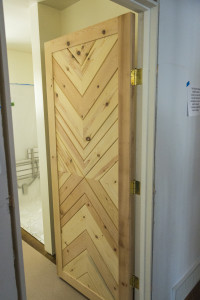 As a painter, Chris has spent plenty of time around construction sites.

“I just see how much energy and effort is being wasted, how much stuff is being thrown away,” she said. “So I took this class in sustainability and sustainable design and said, I need this so I know how to deal with my dad’s house. I educated myself. And along the way realized there’s not much education going on. California is extremely active and has mandated a lot of things that people at first were furious about. California Title 24, especially, which is mandating that builders build houses and commercial buildings to be energy efficient. Hey folks, this actually saves you money.”

She has evidence of that already. That giant heating bill for the month of February 2014 was reduced significantly one year later when the home was not yet furnished and was being heated by a temporary furnace. The Kellems paid $72 and some-odd cents for heating in February 2015. Now with an energy efficient heating system and a very tight home, the dead of winter should not pose such an economic burden.

“This is all about education,” Chris said. “I’m really disappointed in the state and federal leadership. I find it quite stunning, and I’m a Republican. Does that matter? Our climate change transcends any of that. What’s not happening is ridiculous. I’ve told people, I went to California, got married, raised three kids. During those years, in a way, I kind of went to sleep. I stuck my head in the sand and pretended things weren’t happening. Now the kids are gone. As a house painter, I’m in construction. I’m seeing what’s out there.”

Temme provided them with a helpful connection in the Door County Climate Change Coalition, which agreed to be sponsors for a series of open houses held at the home while it was under construction. 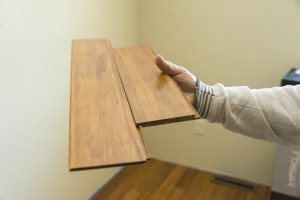 “We have had four open houses,” Chris said. “The very first one, it was about 10 degrees below zero and 15 people showed up, but toward the end 100 to 150 people were coming.”

Climate Change Coalition members Dick and Mary Smythe said it seemed natural that they team up with Virge Temme’s team to help fulfill the educational component.

“Virge is a really strong part of the leadership team of the Climate Change Coalition,” said Mary Smythe. “She’s passionate about building sustainability and she’s also passionate about education about how we can live more sustainability. It was just a natural for her to suggest to us that we’d be considered as the sponsors for her open houses to help educate the public about climate change issues. The education is all toward reducing human impact on the environment. It’s just a marvelous blend of her high skills and deep interest in reaching out to the public and education.”

“The energy leakage from commercial buildings is very substantial. It’s a major contribution to our atmospheric conditions,” Dick Smythe said. “Updated business codes would be helpful. Wisconsin hasn’t updated its building codes since 2009.”

The final step in granting LEED certification is testing the house for air tightness with the help of a blower door, a technology developed in Sweden in 1977. The blower door testing took place on April 25 and was conducted by Tom Krawczyk of TJH Energy Consulting, Lake Geneva, Wisconsin. He also sealed all the heating and return vents to see how tight the ductwork is. 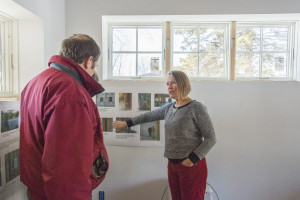 “In most homes, cold air returns run between ducts,” Krawczyk said. “In LEED homes they are within sealed ductwork. That prevents a lot of heat loss in the ducts. When the cold air comes back into the furnace, it’s pretty much pre-warmed, so it makes the furnace run that more efficiently.”

Krawczyk’s testing revealed a couple of tweaks that needed to be done, but the numbers he was getting will put the home in the Platinum LEED category.

LEED stands for Leadership in Energy and Environmental Design and is a system developed by the United States Green Building Council to assist in the design, construction and testing of some of the most energy-efficient and environmentally sound buildings in the world. LEED has four tiers of ratings based on points earned in eight categories, including site, indoor air quality, innovative design, air quality, materials, water and energy efficiencies and education. Platinum is the highest level of accomplishment.

LEED – or Leadership in Energy & Environmental Design – is a green building certification program that recognizes best-in-class building strategies and practices. 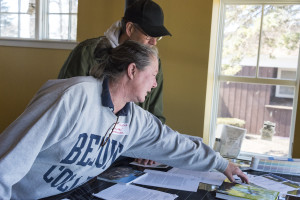 The Kellems expect their home to earn 98 points

3 points: Use of previously developed site; built above flood plane on piers to bedrock. 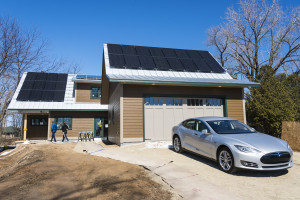