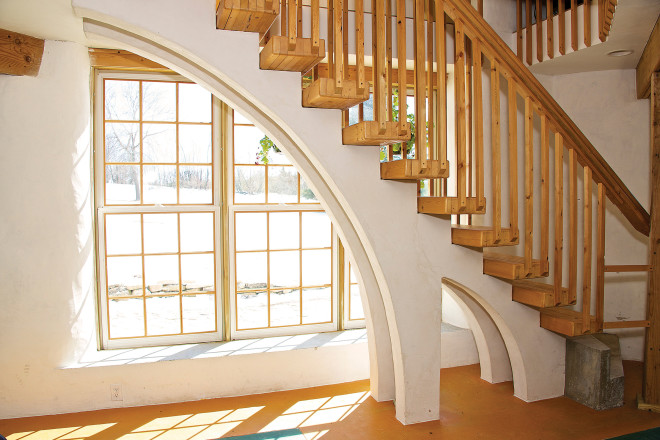 Before I met my husband, I had heard little of straw bale home construction. To be frank, the thought of building my home entirely from straw caused me to feel strangely akin to the most ill-advised of the three little pigs. Surely, my husband Joel had heard that story and knew that the only logical conclusion to keeping that nasty wolf at bay was to build our dream home from brick, not sticks, and certainly not straw. Straw homes were for people who lived in the American 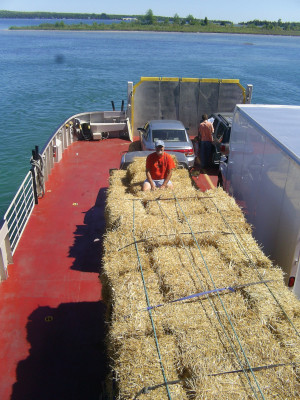 Southwest where the weather was dry, the winter wasn’t six months long, and the Birkenstocks were plentiful.

I couldn’t have been more wrong – about many things.

When Joel began dreaming about our home, he had already done his homework. To convince me, the more skeptical partner, he had a little work to do. He began by providing me with a stack of books to read. They were informative, aesthetically breathtaking, and clearly singing the praises of straw bale, but I remained incredulous. His next step was to bring me along to see other straw bale homes in the area.

As seasonal restaurateurs, Joel has six months “off” each winter after Good Eggs closes. Before our children came along, he used to pound nails for Russ Cockburn, an Egg Harbor contractor who specializes in custom homes and has built straw bale homes in Door County, including ours.

This particular winter, Joel brought me down to a small project in Jacksonport to ease my fears, which were:  Won’t a straw bale home go up in flames faster? (No.) What happens if the straw bales get wet somehow? (They shouldn’t if enclosed properly.) How will we ever get insured? (There are progressive companies out there.) Won’t my house smell like a farm? (Nope.) What if a family of 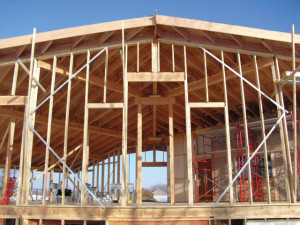 rodents finds a way in to make a colony in the straw and suddenly we have enough mice and rats to make our own Disney movie? (Unlikely, since the straw bales are encased entirely with plaster and there’s no oxygen inside.) My list of concerns went on. Joel was patient, and he calmly provided me with information to convince me.

What eventually did convince me was not the concession that my panicked concerns were not actually going to come to fruition. What convinced me was the philosophy of “green building,” and the sound logic that underpinned an attractive, comfortable, cozy home.

If one were to look at the skeleton of our home, it would look, generally speaking, like any other classic American home. We have a post and beam construction – the woodwork shaped and fitted by Russ, Joel, and the rest of our incredible crew. We have radiant floor heat in a concrete floor, which is delightful and toasty in winter, for toddlers and Border Collies especially. We have propane, which provides our heat (for now). Our plumbing and electrical systems are just like everyone else’s I know. 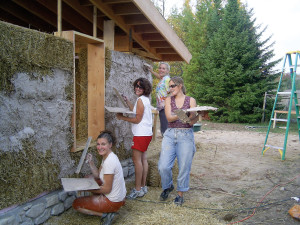 This, however, is where our home diverges from the mainstream. During the typical construction process, after the skeleton phase contractors begin to place insulation in between the wall studs, and then put up sheet rock, then plaster, which eventually most people paint or wallpaper over. Instead of fiberglass, foam board, or cellulose, we stacked bales of harvested, dry, local straw into the walls. Our first round of bales came all the way from Washington Island – from a field, in fact, where the wheat in Island Wheat beer is grown. Our second round came from Henschel’s in Jacksonport. 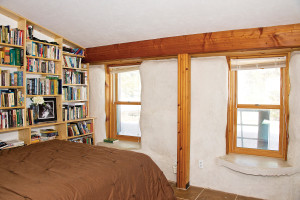 During the building process, Russ and Joel would choose dry days to stack the bales and begin the plastering process. All of the bales were sealed from floor to beam with several coats of a lime plaster and finished with a smooth lime wash. This part of the process was time consuming and took patience and skill to evenly apply multiple coats of plaster. The finished look appears like adobe or even gently undulating stone, which is an interesting characterization since lime plaster continues to harden once it is applied, eventually gaining the strength of concrete.

One of the benefits of straw bale construction is its friendliness to the environment. Straw is an entirely renewable resource with a short growing cycle and, generally speaking, it is a waste product for farmers. In America, we burn or dispose of 200 million tons of this wasted straw, in turn emitting high amounts of carbon dioxide. Additionally, since straw is a completely natural product, the manufacturing and transportation effects and costs associated with conventional building materials are close to non-existent (unless you include the passage on the Washington Island Ferry for 150 Island Wheat straw bales). 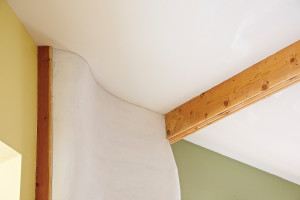 Another reason we chose to build with straw bales was due to their thermal resistance. Eighteen-inch straw bale walls like ours, when constructed properly, can have an R-value (an insulation measurement) of 40 to 45, while the standard insulated six-inch stud wall ranges from 15 to 25. Over a standard 30-year mortgage cycle, straw bale construction can be two or even three times as efficient, reducing energy costs drastically. When we built the first phase of our home, I recall having to open windows in the winter when we’d have a fire in woodstove to keep from overheating. In the second phase of building, we built a 54-foot, southern facing wall of windows to take advantage of passive solar gain. The winter sunlight warms our concrete floors, further reducing energy costs.

All of the environmental benefits and energy reduction are nice, but what I really love most about living in a straw bale home is the aesthetic. The rounded walls, deep-set windows, and open spaces create a soft, timeless appeal. Early in the mornings, the winter sunlight filters in catching the bale walls, tinting them with whatever shade of sunrise the dawn happens upon. In the heat of summer, 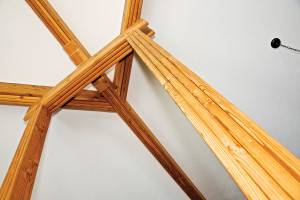 our large overhangs shelter us from the brunt of August’s temperatures. And when the sun sets, regardless of the season, our home is bathed in ethereal light, casting shadows on my toddlers as they bounce on the couches.

I feel lucky. I know that there is no other home like ours since my husband plucked it from a hundred visions he’d had over 20 years. I love it when it’s filled with friends around the dining room table or when it’s bathed in moonlight and the Ephraim swamp crickets are singing through the open windows. To me, our straw bale home is a miraculous oddity born from Door County dreams.