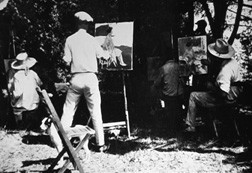 It began in 1922 and lasted just three years, but it was the beginning of Door County’s fame as a Mecca for artists. On the heels of World War I and thanks in part to the Soldier Rehabilitation Act of 1918, the Frogtown Art Colony set up camp on the shores of Lake Michigan in Baileys Harbor.

In the summer of 1922, Frederick De Forest Schook and Frederic Victor Poole, professors at the Art Institute of Chicago, established the camp in the Frogtown community south of the village. The name Frogtown can be traced to the nickname for a French couple who lived in the area. Apparently, the practice of referring to the French as Frogs was based on the green hue of their WWI uniforms, hats and boots and was not, at that time, considered derogatory.

Schook had heard about Door County’s natural beauty from Art Institute of Chicago students Alice Apfelbach and Ferdie Hotz, Jr., and in 1921 he hired Bill Tishler Sr. and Frank Oldenburg to build a summer home for him on Muckian Road. He recognized that it was an ideal spot for a program for aspiring painters and recruited Poole to join him in developing the art colony the following summer. Poole also built a cottage that year, although he chose a spot across the road, as his wife didn’t want to be too near the water.

While the professors had their newly built cottages, the art students were put up in other accommodations. The single men had rooms at the nearby Lakeside Lodge owned by Annabelle and Bill Muckian, and all the students took their meals there. A federal grant provided married students with lanterns, stoves and tents rented from Frank Blakefield, who owned a general store at the present location of the Yum Yum Tree. 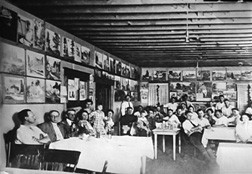 At that time, Muckian Road was an extension of Bay Shore Drive (now Frogtown Road), running right along the water’s edge. Later Cornelius Tecktonius, a businessman from Racine, built a home near the lodge and objected to the road crossing his property. It was rerouted behind the houses and eventually renamed Chapel Lane.

There were 20 students the first summer. An article in a local newspaper reported that those who had studied art before the war worked in watercolors or oil, while the beginners sketched with crayons. In their spare time, they dismantled several abandoned log buildings on the Charles Honold farm and built an art studio under the supervision of Frank Oldenburg. At the end of the summer, the artists presented a play, Down East, at Schram’s Hall and also in Egg Harbor and Sturgeon Bay.

By the summer of 1923, Harry Anthony DeYoung, also from the Art Institute of Chicago, was added to the staff, and 45 students were enrolled for 12 weeks. Their activities soon became the talk of the community. Nearly every column of Baileys Harbor news in the Advocate included reports on what the young men were up to. Residents liked to watch them as they drew and painted around town, and they became famous for their entertainments.

A news article by Mary Ann Johnson reported that the students “were full of ambition, deviltry and a little talent and, given a July 4 holiday with no plans in sight, they decided to give the town a little excitement. 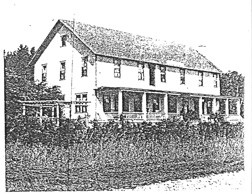 Students at the Frogtown Art Colony, especially the bachelors, stayed at the Lakeside Lodge owned by Annabelle and Bill Muckian. Image courtesy of Mary Ann Johnson.

“Posters were painted and put up in neighboring towns and when the day came, quite a crowd assembled along the village sidewalks. There were few cars then to use for floats and very little material for decoration, but the artists were ingenious, and it was surprising how costumes and props were improvised and borrowed. There were flower girls strewing flowers for the marchers (local youngsters), a snake charmer and his viper, a Wildman from Borneo, a hay rack with hula girls and even a giraffe (handmade of course!).”

After the parade, the artists’ baseball team, Duke’s Comedy, played the Baileys Harbor Giants. Later in the afternoon, fight fans attended a four-bout boxing exhibition at Schram’s Hall. Good order was assured by the sponsoring Athletic Club. Three of the students donated oil paintings as prizes for a costume party at Wasserbach Hall.

But changes were coming. In 1924, the Muckians sold the lodge, which burned to the ground six years later. Fewer veterans attended the art school that summer, but they were joined by some private students. In 1925 and ’26, Schook and Poole taught classes for the Art League in Green Bay, and Schook also had private classes in Ephraim that were the beginning of the Peninsula Art Association.

Schook died in 1942, and the art studio his students built is long gone. But his home, the Schook Shack, belongs to two grandsons, both professors at the University of Virginia. Poole continued to spend his summers in Door County, until his death here on July 4, 1936. His great-granddaughter, Margaret Poole, now owns his log home and studio, Burnt Hollow. A retrospective exhibit of his work was held at the Miller Art Museum in Sturgeon Bay in 1979, and its permanent collection contains excellent examples of work by both men, aptly titled “Frogtown” and “Fall Day on Frogtown Road.” DeYoung moved to Texas in 1928 and died in 1956.

While few physical remnants of the Frogtown Art Colony remain, the spirit it brought to the community lives on in the artists who continue to learn and create in Door County.