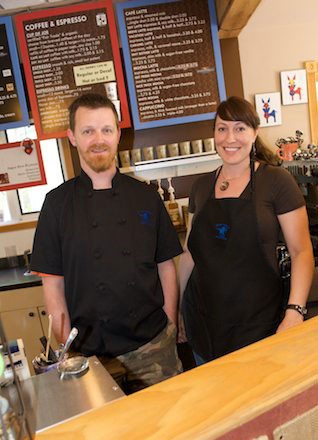 Owning and operating a business is seldom an easy feat, especially when there’s more than one person 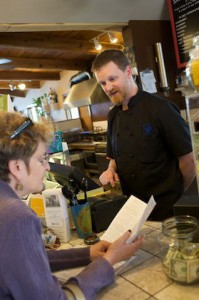 involved. Blue Horse Bistro & Espresso owners Carina Helm and Eric Rasmusson readily admit that when they first started the ball rolling on their café, there was more than one person telling them that it would never work. “We met with so many attorneys that told us that most partnerships fail – one person becomes convinced that the other isn’t pulling their weight, or isn’t doing enough,” Rasmusson says. “The partnership dissolves, and there are always hard feelings. But we just knew that it wouldn’t be that way for us.”

And, true to Rasmusson’s word, it wasn’t that way with them. Blue Horse Bistro, now in its ninth season in Fish Creek, has grown into a popular destination for locals and visitors alike. Known for its consistently delicious coffee, sandwiches, pastries, soups and salads, Blue Horse has become an integral part of Door County’s café scene. But even more astounding than the food and coffee is the partnership that has been forged by Helm and Rasmusson – one that is built on the simple but sometimes forgotten principles of communication, understanding, and friendship.

Rasmusson, a self-titled “veteran” of the restaurant business, began working as a dishwasher in Byerly’s, a chain of grocery store/restaurants in the Minneapolis area. He worked up to a cooking position before quitting to work at a Pollo Italia, also in Minneapolis, where he was hired as a salad chef. It was here that Rasmusson’s love of food was cultivated. “I learned that you could turn someone’s day around simply by putting a great plate of food in front of them,” he says. “The chef at the restaurant was Italian and very serious about his craft. I started to see that there was a huge difference between ‘cooking’ and ‘chefing.’”

He would stay on at Pollo Italia for six years before making his move into his first management job, at a place called Sydney’s. His work with Sydney’s took him to Billings, Montana. “I was 23 when I moved to Montana, and I think Sydney’s was really where I came into my own,” Rasmusson says. “I had to deal with vendors, competition from other restaurants, budgeting – it was a great learning experience.” He had been working with Sydney’s for six years when he received a call from a headhunter, which turned out to be the owner of Grazies, a fine dining Italian restaurant that was soon to be opening in Green Bay, Wisconsin. The owner wanted someone to take the concept of the restaurant and run with it – and he had heard Rasmusson was just the man for the job.

So, at 30 years old, Rasmusson assumed full responsibility for Grazies. Even though the job was a good one, however, Rasmusson is the first to admit that he had no life. “I can’t actually remember much of the five years that I worked in Green Bay. After the first restaurant, I also helped open two others – three restaurants in five years.”

It was in Green Bay where Rasmusson also learned another valuable lesson of working in the restaurant business. “If a restaurant thinks they’re done with you, they let you go,” he smiles. Unsure of what he wanted to do next, he remained in Green Bay.

Helm, meanwhile, grew up in DePere, and worked her first summer in Door County before her senior year of high school. She came back to the peninsula throughout her college summers as well and eventually returned to live in Door County full time. “I just loved it up here so much and was determined to find a way to be up here as much as I could,” she says.

“I knew there was this space available for rent, and it seemed like a good deal,” Helm says, talking about the initial Blue Horse location in “Fred’s Backyard” on Main Street in Fish Creek. “I knew I wanted to open a coffee shop that served food, because at that time, there were no cafés with food in Door County. And, I had no idea how to go about running a business.” She began talking about the idea with a close friend, who happened to be Rasmusson’s roommate in Green Bay. Rasmusson and Helm eventually got to talking about a potential café, and a partnership was born.

The Blue Horse Bistro in Fred’s Backyard opened in September of 2001 (“Our goal was Memorial Day weekend of 2001,” Rasmusson laughs). The employees consisted of Rasmusson and Helm, who worked constantly, and there were no large bank loans to speak of, save for a $20,000 family loan. “Our hard work and lack of a money cushion seemed like part of the café’s charm,” Rasmusson says. “When you came into that shop, you could literally feel that it was all us in there.” They stayed in that location for three and a half years, working non-stop at the café throughout the Door County summers and falls and working elsewhere in the off seasons.

The winter before their fourth season, a water leak in the café caused them to reevaluate the future of Blue Horse. “The café was basically paying for our summers,” Rasmusson says. “So when the water damage happened, we were like, ‘Well, do we just close it up and say we had fun?’” In an effort to try to relocate, Rasmusson began talking with Paul Krause, who had run Kravings Coffee Shop on Main Street in addition to his jewelry store, Paul David Jewelry. “He wanted us in there,” Helm says. “He knew we put out a good product, and he knew people liked us.” The two eventually moved into the former Kravings building and spent a month renovating the building before opening up for the 2005 season. 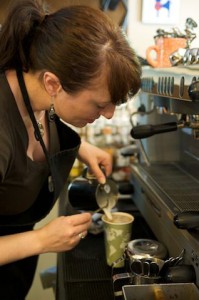 r than themselves. “It was just us in the old location, and when we moved, we both just kept on working the same as we always had,” Rasmusson says. “After two years of being here, we started to hire people to work with us. We’ve really been lucky to have found the amazing people we have had – it’s hard work to come into a business where the owners have been the only ones working.”

When asked about the key to their own partnership, the two are quick to agree on the common denominator – which is “leaving each other alone.” “I’m coffee, and Eric is food. We make suggestions to each other, but we never tell each other what to do,” Helm says. “We drew the line early on and we stayed there. It’s all about communication and knowing boundaries.”

“It also helps that we were both willing to put in the same amount of work,” Rasmusson says. “There’s never been a situation where either one of us thinks, ‘I’m pulling more weight than you’ or ‘I’m working more hours than you are.’ We care about each other’s lives, so we’re willing to work around each other schedules. We began Blue Horse because we care about the business, and bringing a good product to the public – not because we cared about making any money.”