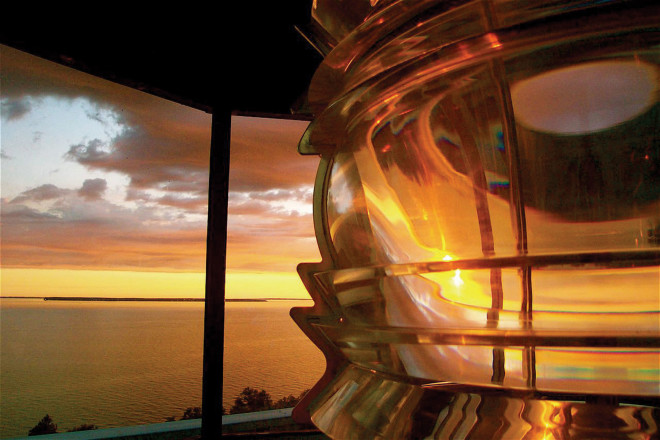 Imagine, if you can, a time nearly 200 years ago when Green Bay and Prairie du Chien were the only two major towns in Wisconsin. When the Erie Canal was completed in 1825, the already thriving shipping trade between Green Bay and cities on the eastern Great Lakes increased dramatically. Troubled by the number of shipwrecks in Death’s Door, 30 Detroit merchants and ship owners petitioned Congress in 1834 to build a lighthouse on Rock Island to guide ships through that treacherous passage. 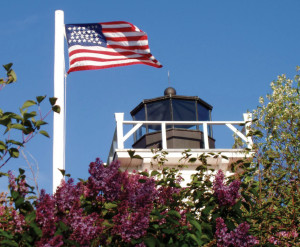 In 1836, a government crew selected a spot on a 129-foot bluff on the north side of the island. The Rock Island Lighthouse on Pottawatomie Point that began service in October 1837 was a 30-foot stone tower, 18 feet in diameter at the base and nine feet in diameter at the top. The Winslow Patent light had eleven oil lamps and eleven 14-inch reflectors. It was the first lighthouse in what, eleven years later, would become Wisconsin.

A separate 34-foot by 20-foot story-and-a-half stone house with two apartments was provided for the keeper and his assistant. David Corbin, a veteran of the War of 1812, was the first keeper of the Pottawatomie Light, from its opening until 1852. When the district inspector visited in 1845, he found Corbin desperately lonely and gave him a 20-day leave of absence with the specific assignment of finding a wife. Corbin’s search was unsuccessful, and he served his last seven years with only his horse and dog for company. He died alone, at his post, and was buried in the little cemetery south of the light, along with ten other souls, most of them shipwreck victims. Laurie Flanigan, a long-time actor/playwright with American Folklore Theatre, spent a night at the lighthouse in 2006 researching her play, 20 Days to Find a Wife, that had its world premiere last year at St. Paul’s History Theatre.

Sixteen other lighthouse keepers followed Corbin from 1852 to 1946. It was not an easy life, and many of the early men lasted only one or two years. Because the dock where supplies were delivered once a year by the U.S. supply steamer Dahlia was more than a mile from the lighthouse, Corbin cut a road through 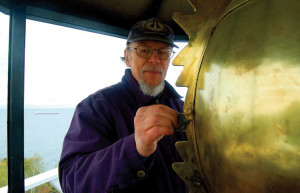 the forest. Everything he used, including drinking water, had to be hauled up this steep trail. The light, like a hungry baby, demanded to be fed day and night – trips up three flights of narrow stairs with fuel ranging from the original sperm whale oil to lard oil and coal oil (kerosene). There wasn’t, and still isn’t, electricity on the island. In the early years, a hand pump in the winter kitchen brought up rainwater for bathing and washing clothes from cisterns in the basement, but in the dry summer of 1884, Keeper William Betts and his wife carried every drop of water the family used, two bucketsful at a time, up the 154 steps from the lake. 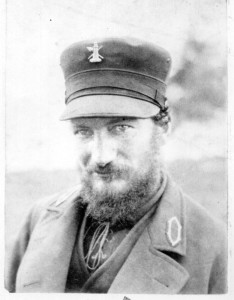 In the mid-1860s, the wife of Abraham Grover, the assistant keeper, taught Rock Island children in the basement of the lighthouse. Usually though, the keepers’ families lived on Washington Island during the school year, with the keeper joining them from December 15th through April 1st, when shipping was dormant. Some, however, opted for the more isolated life. Betts’s wife, Emily, a sea captain’s daughter, delivered the first two of their nine children in the lighthouse without the assistance of doctor, nurse or neighbor. She also served as assistant keeper during two of the 16 years of her husband’s term.

In 1858, the lighthouse and tower fell victim to mortar failure and were razed and replaced by the present 33-foot by 31-foot dwelling, enclosing an 8-foot by 8-foot tower topped by a nine-sided lantern with a fourth order Fresnel lens. It produced a steady white light visible for 14 nautical miles.

In 1946, the U.S. Coast Guard automated the light with a battery-powered beacon attached to the railing of the lantern deck, and the last keeper and assistant left the island. The Fresnel lens was stored in the basement. Its disappearance a few years later remains a mystery. In 1988, the Coast Guard erected a 41-foot skeletal steel tower west of the lighthouse and moved the beacon there.

In 1910, wealthy Chicago businessman Chester Thordarson began purchasing parcels of private land on Rock Island, including, for $5,000, 661 acres from Rasmus Hanson, a Washington Island boat builder. Within two years, Thordarson had acquired all the land on the island except the government-owned spot where the lighthouse stood.

Thordarson’s dream of creating an entire village on his property was derailed by the Great Depression, but the magnificent stone boathouse that he called The Jewel House of Art and Nature, built on the southwestern shore, remains, a 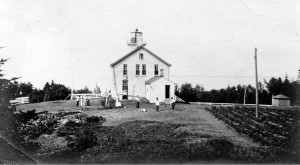 s does one of the cottages he built for his sons, now used as the park ranger’s office.

In 1965, the State of Wisconsin purchased the Thordarson estate from his heirs and created Rock Island State Park, unique among the state’s 66-site park system. The lighthouse, deserted for 58 years, was destined to be reborn because of the intense interest of Tim Sweet, a school teacher/librarian from Clintonville, Wisconsin, who first visited Rock Island in 1988, when the lighthouse and tower were boarded up. Two years later, he participated in a workshop on lighthouse restoration at the 1872 lighthouse on St. Helena Island, ten miles west of Mackinac Island, and a dream was born. 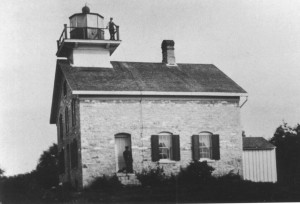 By 1994, Sweet and others had founded Friends of Rock Island to aid the Wisconsin Department of Natural Resources in enhancing the beauty and history of the park, and three years later restoration began. Their first focus was rebuilding the lantern room, a job completed by Tony Hodges of Sturgeon Bay in 1999. A hand-polished acrylic replica of the Fresnel lens was designed by Dan Spinella of Artworks Florida. Matching grants from the state and additional money from individuals and corporations funded the restoration of the lighthouse. At first, volunteers attempted to do all the work themselves, but by 2003 they could afford to hire a contractor to complete the restoration of the building to its 1910 appearance. The 1836 privy, thought to be the oldest building in Door County, was also restored, although there’s now a composting toilet on the site.

The Rock Island Lighthouse Museum was dedicated and ready for visitors in 2004, but there was a major problem – the state had no money to hire tour guides. The lack of funds resulted in the establishment of one of the most unique features of the park. Volunteers sign up to live in the lighthouse for a week at a time, serving as docents for the 5,000-plus visitors who tour the lighthouse each season and keeping the house and toilet clean. There are, park property manager Kirby Foss says, far more applicants than can be used during the weeks from Memorial Day to Columbus Day. The lighthouse is open from 10:00 am to 4:00 pm daily during that time.

The park has 35 campsites close to the boat dock, five backpack sites requiring a hike of over a mile and two large-group sites. All have pit toilets, picnic tables and fire rings. Reservations are required through reserveamerica.com, and all sites fill quickly. About half the island is virgin forest with plants that grow nowhere else in Door County. There are 10 miles of hiking trails and 5,000 feet of beach. No vehicles, not even bicycles, are permitted on the island. 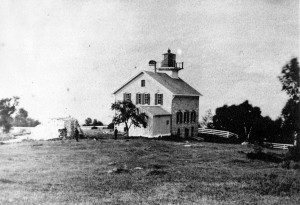 The over 25,000 annual visitors to the park are evidence that the journey – a ferry ride from Northport to Washington Island, a drive to the dock for the Rock Island ferry, and a 1.2-mile uphill trek to the lighthouse – is well worth the effort. For more information visit the park website or call Kirby Foss at (920) 847-2235, or contact the Friends of Rock Island, now 200 strong.