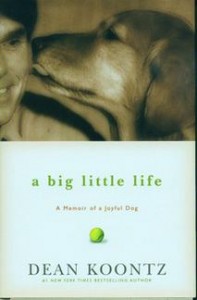 A Big Little Life: A Memoir of a Joyful Dog

Have you ever seen The Perfect Dog?

Of course you have. It might be a Lab or a Lhasa; maybe miniature but mighty, or huge and huggable. The Perfect Dog understands conversation, has a wicked sense of humor, never does anything wrong, can flawlessly perform several different tricks on command, and might even have a streak of heroism in its furry body.

Or, if there’s room for debate, Dean Koontz says it was his pooch. In the new book A Big Little Life: A Memoir of a Joyful Dog, you’ll read about her.

When you learn about Dean Koontz’s life as a youngster, it’s no wonder where his sense of the edgy came from: Koontz was the child of a “skirt-chasing,” alcoholic gambler and a gentle woman who tried to hold the family together. There was barely enough money to afford four walls then, let alone a four-footed mouth to feed.

Which is to say that Dean Koontz never had a dog as a child.

Koontz and his wife, Gerda, both loved dogs and worked tirelessly on behalf of Canine Companions for Independence (www.cci.org), but they thought fitting a dog into their lives would be difficult. They always said they’d have a dog someday – when the timing was right and life slowed down.

Over dinner one night, they realized that life was never going to slow down. They then asked to adopt a “released” CCI dog. And Trixie, retired due to a fixable injury, came to “Koontzland”.

She was 60-some pounds of golden fur and doggy smiles. Her face had a wide range of expressions and she had the ability not only to convey what she was thinking but to know what others were thinking, too. Flawlessly trained to assist someone who was wheelchair-bound, she never forgot her training and could be trusted completely in most any situation. She was welcomed into restaurants, offices, stores, and homes…and firmly into the Koontz’s hearts.

Readers of author Dean Koontz’s books expect to feel a little jumpy when reading his novels, but that won’t happen here. Instead, sit awhile with A Big Little Life and you’ll only jump up for tissues.

In this, his first non-fiction book, Koontz gives fans a peek at his personal life: his hardscrabble childhood, past jobs and his dream of writing, courting his wife, and becoming a multi-million-selling author. In between his life story is the tale of a dog that was widely loved, a good judge of character, and downright goofy, and a dog-lover who became unexpectedly smitten with a pup with personality-plus.

Don’t expect the usual Dean Koontz fare in this book. Do expect an unusually great story. For dog lovers of all ages, A Big Little Life is just perfect.