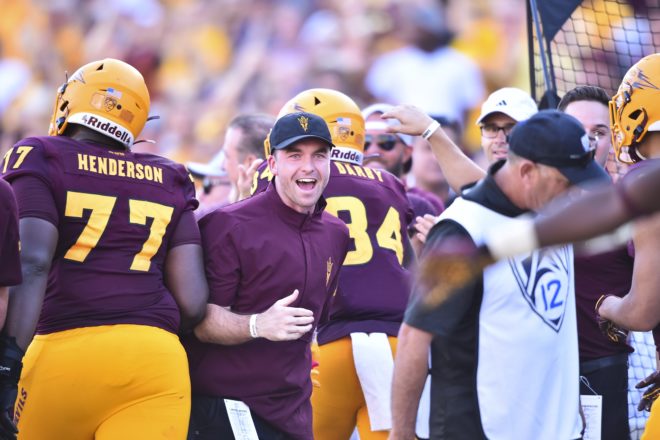 When 2013 Sturgeon Bay High School graduate Matthew Seiler had a season-ending injury during his senior year of football, he had to reevaluate his plans to play college football.

Aside from enjoying other sports in high school – basketball, track and golf – he also enjoyed entrepreneurship, finance and marketing. But he knew he couldn’t abandon sports, his number one passion. Was there a way he could do both?

Seiler started researching other schools, and one Saturday morning in January his mom received an email about a new sports media studies degree program at Arizona State University (ASU).

He thought it would be a perfect way to blend sports and business. It also helped that he had family members who lived in Arizona and had a cousin who had attended ASU.

So, Seiler decided to take the leap to try something different – and was excited to leave the dark winters behind.

“I fell in love with the place,” Seiler said. “Not only for the weather and the beautiful campus, but just the opportunities.”

The adjustment period, however, went a little differently than he had expected.

“I was homesick multiple times at first,” he said. “I was like, ‘Oh, man, I should have gone to Madison, where all my friends went.’”

Joining a sports-business scholars group to get involved helped to alleviate those feelings, and it was a great opportunity to build relationships and network with other like-minded students.

He also went back home to intern with the Green Bay Packers in their marketing department during his junior-year summer. When he entered his senior year of college, he thought he knew what he wanted to do and had applied for a job with the Packers, along with some other teams.

“I was always playing and watching the Packers and Badger football – everything football,” Seiler said. “That’s all I wanted to do was watch football and be around it.”

When he volunteered with the ASU football team during the spring semester of his senior year, someone suggested he get a master’s degree in sports law and business. Within that program, there was an opportunity to work for an athletic team as a graduate assistant, and there happened to be an opening with ASU football.

There, he learned about contract negotiation, licensing and sponsorship agreements. He got to work with faculty and industry professionals from major sports teams and to discuss real-life situations instead of reading pages from a book.

“In the sports industry, what I’ve found, is there was no book, no PowerPoint and no video you can watch to understand and be able to predict what’s going to happen next,” Seiler said. “It’s something that’s ever changing.”

Seiler is now a full-time senior player personnel and analyst assistant at ASU. In that role, he’s in charge of all film evaluation of high school and junior-college prospects. Essentially, he said, he acts as a recruiter.

“Over the last year and a half, I’ve evaluated over 2,500 prospects,” Seiler said.

His favorite part of the job has been watching the students the team has recruited develop into great sports players and well-rounded individuals.

“A degree should never be taken for granted, and I think it is at times,” he said. “To see these kids – some of them come from extreme poverty and difficult situations – to see them being given an opportunity to ultimately reach their dreams or one day even give back to their community that helped get them through the toughest of times is really cool. You cherish every moment you see it.”