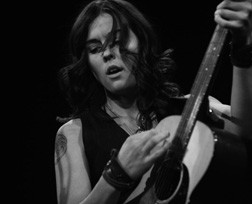 After Brandi Carlile rocked the Door Community Auditorium (DCA) in 2010 with a breathtaking performance, the audience left wanting more. Showcasing finely crafted songs and an incomparable voice, which swings easily between gentle, honky-tonk twang and fiery, rock-and-roll power, Door County has a chance to catch this powerhouse performer once more.

Over the course of her short but meteoric career, Carlile has collaborated with the likes of Shawn Colvin, Elton John and the Indigo Girls. Whether she’s rocking out with her full band or standing tantalizingly close to the edge of the stage, singing a cappella, Carlile brings a riveting intensity to her live performances.

Opening for Carlile is The Lumineers, a trio that offers a new generation of rustic, heart-on-the-sleeve music – the kind that nods to tradition while setting off into uncharted territory. The Lumineers walk that line with an unerring gift for timeless melodies and soul-stirring lyrics.

June 23, hearts will be pounding in the DCA with these riveting, back-to-back performances.