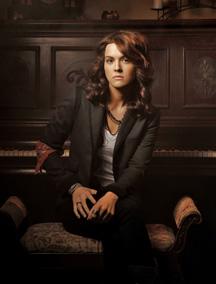 Contemporary folk-rock singer Brandi Carlile will grace the Door Community Auditorium with her dynamic presence on Sunday, August 22 at 8 pm.

Since her major-label debut in 2005, Carlile’s career has exploded on the folk-rock scene. Sheryl Crow commented on Carlile’s talent: “She has the most amazing voice I may have ever heard. Soulful. Country. Perfect in every way – and propelled by taste.” The 29 year old from Ravensdale, Washington, has collaborated with several notable musicians, among them Sir Elton John.

Carlile has released three albums to date, Brandi Carlile (2005), The Story (2007), and Give Up The Ghost (2009), all of which have been met with an overwhelmingly positive response from fans and critics alike.

Carlile’s voice is truly unique, standing out from other female voices on the music scene today. Her tone has been compared to music industry greats Patsy Cline and Janis Joplin.