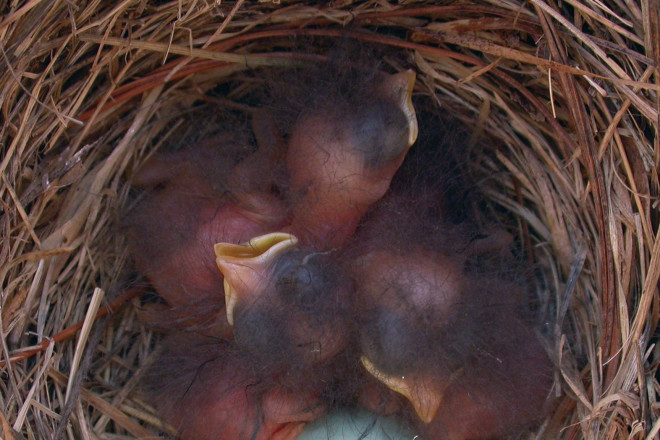 At least 85 species of North American birds either excavate nesting holes, use cavities resulting from decay (natural cavities), or use holes created by other species in live, dead, or deteriorating trees for their home. Species such as woodpeckers, swallows, wrens, bluebirds, nuthatches and owls, to name a few, are cavity nesters. Heading the list in numbers in North America are the woodpeckers, 19 species in all. Even seven duck species use cavities for nesting, including four Door County species:  the Wood Duck, Common Goldeneye, Hooded Merganser and Common Merganser.

Prior to the arrival of Europeans to North America, all cavity-nesting birds used natural cavities. Gradually, standing dead snags (excellent sites) were cleared away along with other trees that were not aesthetically pleasing to the eye. As a result, few nesting sites were left for cavity-nesting birds. The arrival to our continent of the European Starling and House Sparrow proved to be highly competitive to the Eastern Bluebird, for example, for good nesting sites. 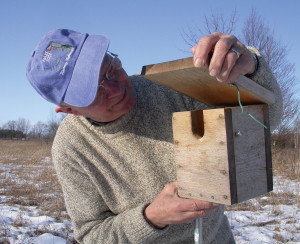 The farm my dad was born and raised on during the early 1900s, along with most other farms of those times, used Eastern White Cedar fence posts. Often the top three-to-four-inch wide central portion of the posts rotted out, to around four to six inches deep. According to my dad, Eastern Bluebirds used those natural cavities extensively. Obviously, those nesting sites lacked roofs, but the birds got along in most instances very nicely. This was before starlings and opossums were big predators.

The introduction of steel fence posts to farming did away with most of the cedar post nesting cavities, and here is where people entered the picture by designing suitable wooden nest boxes. These were accepted readily by the bluebirds and, without a doubt, the badly dwindling population of this species was helped remarkably by well-meaning people. It can safely be said today that bluebirds need people more than ever. This applies to all three North American species:  the Eastern, Western and the Mountain Bluebirds.

Helping bluebirds by building nest boxes, establishing nest box trails, and doing careful monitoring goes back between 50 and 60 years in Wisconsin. Fortunately, I’ve been involved with building and putting out bluebird boxes for at least 53 years. The box my dad and I designed to start with had a relatively small cavity size of around 3 ½ inches by 4 ½ inches, a size that was criticized by some of the “experts” as being too small. Dad based the size of the cavity upon his experiences on the farm with the bluebirds that nested in the hollowed-out White Cedar fence posts. Our small boxes (we built 475 one winter) worked very well. Today, the recommended cavity size is 16 square inches. Our boxes 50 years ago were only slightly smaller.

Gradually, through the years bluebirders have tried at least a dozen or more different bluebird nest box plans. Today, the three most widely used plans in our state are the NABS (North American Bluebird Society), a box having a slanting roof and a side opening, and which is fairly easy to build, install and monitor; the Peterson box, which is very difficult to construct and is comparatively heavy and challenging to mount; and the K-style (Kentucky), which is the box we favor and use exclusively on our 48-box trail. It is quite easy to build, has a top opening which is ideal for monitoring the nesting progress, and is also easy to mount using rebar (concrete reinforcing rod) and half-inch electrical conduit. 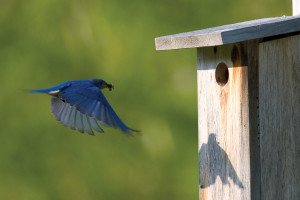 After using the K-style box (which has only a top opening) for several years, I revised the plan to have both a top opening for the best monitoring and a side opening for easy cleaning of the box after each brood. The easiest lumber to obtain for the K-style box, and others as well, is 7/8-inch-thick Western Cedar, readily available at lumber yards.

I like to use full 1-inch thick Eastern White Cedar, native to this region, which I order from a local sawmill as 1½-inch boards. I then have these planed so that the boards are rough-sawn on one side and smooth on the other, but a full inch thick. For quite a few years I fastened the K-style boxes to the electrical conduit using two ½-inch double-winged “C” clamps (available at hardware stores) used with ½-inch electrical conduit. The problem, though not serious, we had with this method was that the nest box acted like a weather vane in high winds, in that the conduit pipe and box are slipped over the rebar and can quite easily turn. Only the rebar is pounded into the ground.

It’s imperative that the opening of the nest box be directly aimed at a nearby tree, within 25 to 100 feet away, to which the fledglings will fly upon leaving the box on their “maiden flights.” The box style one uses for the bluebirds is not as important as where the box has been placed. Ideal placement is beneath overhead power lines with mown roadsides or lawn below. This provides the adult birds with good perches from which to do their insect hunting on the ground below. Nearby open agricultural fields are also very good hunting sites.

When you place the boxes too close to brushy areas you run the risk of attracting House Wrens. Yes, they are protected native birds which consume many injurious insects, but they are also known to be highly aggressive and intolerant of other cavity nesting birds and will often destroy their eggs in the nests. If some of our nest boxes attract House Wrens we simply move the boxes to better sites. Don’t hesitate to ask neighbors who have good bluebird habitat if you can set up boxes on their land. Our 48 boxes have been set up within a three-mile radius of our home. Only three of the boxes have been erected on our own land. The boxes, ideally facing east, should not be placed closer than 100 yards apart, though 200 yards is better. The closer to water your boxes are placed the greater likelihood there will be of attracting Tree Swallows. Our goal is to attract as many bluebirds as we possibly can. 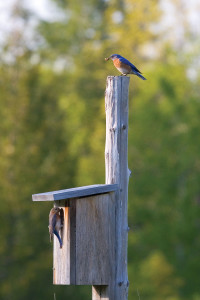 Wisconsin (BRAW) and are serving as coordinators for Door County. This group’s Web site,

www.braw.org, is loaded with excellent, helpful advice on being a good bluebirder. Many good hints can be learned from this group, and the proper monitoring of boxes is covered very completely.

Consider joining and supporting BRAW. You’ll receive, as part of your membership, very helpful printed material. Included, for example, are color photographs of baby bluebirds for each of the 14 days, from the day of hatching to the day of fledging (leaving the nest box). This can be very helpful in good nest monitoring. One of BRAW’s goals for 2010 is to have at least 30,000 Eastern Bluebirds fledged in Wisconsin for which there are accurate observations and records. With this achievement we’ll be crowned (with a blue crown!) number one bluebird state in the nation. Please join the ranks of Wisconsin’s bluebirders. It’s challenging and great fun learning to think like a bluebird!