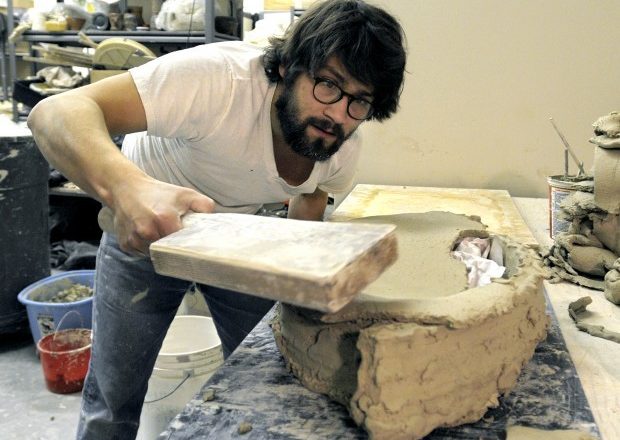 Joseph Pesina was creating lots of pottery – up to 300 pieces a day, four days a week for 10 years, to be exact. The routine, the precision and the efficiency of it all became too much for an artist that wanted to break boundaries with clay. So, he quit the job he had at the time and went in search of what would be more fulfilling as a creative. The Pulse talked with him over a beer at AC Tap about his artistic history and future.

Pesina is a Door County native, a combination of North and South (first of Ellison Bay, then Sturgeon Bay). He eventually became West as well, attending high school in Utah. He found his passion there when he was exposed to the world of ceramics.

He pored over books about ancient civilizations as a young kid, realizing that people preserved their cultures in material objects. When he became interested in ceramics, those things were at the forefront of his mind.

Following graduation, Pesina knew that college wasn’t in his immediate future. Instead, he travelled for a little while to “get that out of [his] bones.” Soon after, he realized that whatever he was looking for wouldn’t be found on the road. He wanted to become a working artist and to be surrounded by those that could influence and inspire him. He needed a little bit of direction.

“I felt as though there is a practical approach to life, and I wanted to pursue that first before I had any desire to go into academia,” Pesina said.

Remembering that there were plenty of clay artists in Door County, he headed back in search of that practical approach. He got involved in ceramics at a few different places in those initial years, the first of which was with Brian Fitzgerald, founder of Ephraim Clayworks, in 1999.

Pesina happened to be walking past Fitzgerald’s shop in Sister Bay one day when he decided to go for it. He headed inside, asked Fitzgerald if he wanted some help and walked out with an apprenticeship. He continued that for a few years while picking up a position at Peninsula School of Art as a studio manager and eventually as their first ceramic artist-in-residence.

He also picked up apprenticeships with Abe Cohn and Larry “Thor” Thoreson. Working with them provided Pesina with a “coming-of-age” experience, he said. Spending time in their studios and learning about different histories, traditions and techniques, like the Marguerite Wildenhain version of the Bauhaus technique, he discovered that he could have a role to play in lineage and history as a ceramic artist.

“Those influences still very much influence how I look at the world and how I look at what I do as an artist, and I can’t thank those people enough,” Pesina said. “All of those people that I worked with, all of them gave me a very solid understanding of what it meant to be a potter.”

In 2004, he felt that it was time to move on once more. He landed a job as a production potter in Whitefish, Montana. Production pottery was something new entirely – there’s less focus on the creative aspects of a piece, but more so on how to become a really tight craftsman.

“There’s no ego involved. The way in which you work becomes like a dance in which you prepare yourself in the morning with many pounds of clay. You’re stretching to a certain degree, and then producing work that is not yours,” Pesina said.

Ten years later and it was time yet again for Pesina to move on. He chased another artist-in-residency in Missoula, Montana. This time, he could stretch all the creative muscles he wanted, particularly those in wood-fired ceramics.

It’s safe to say Pesina really dived into the practical side of ceramics. He had a leg up in real world experiences, but academia became something he wanted to explore, realizing that that was something his colleagues had that he didn’t.

So, he spent his early 30s getting his undergraduate degree in fine arts with an emphasis in ceramics and sculpture at Utah State University. During his time there he worked outside his comfort zone with materials he wasn’t used to, like stone and bronze, thinking that it would make him a more functional potter. Instead, he realized the opposite. He realized he was working toward becoming a ceramic sculptor, and on a larger scale. 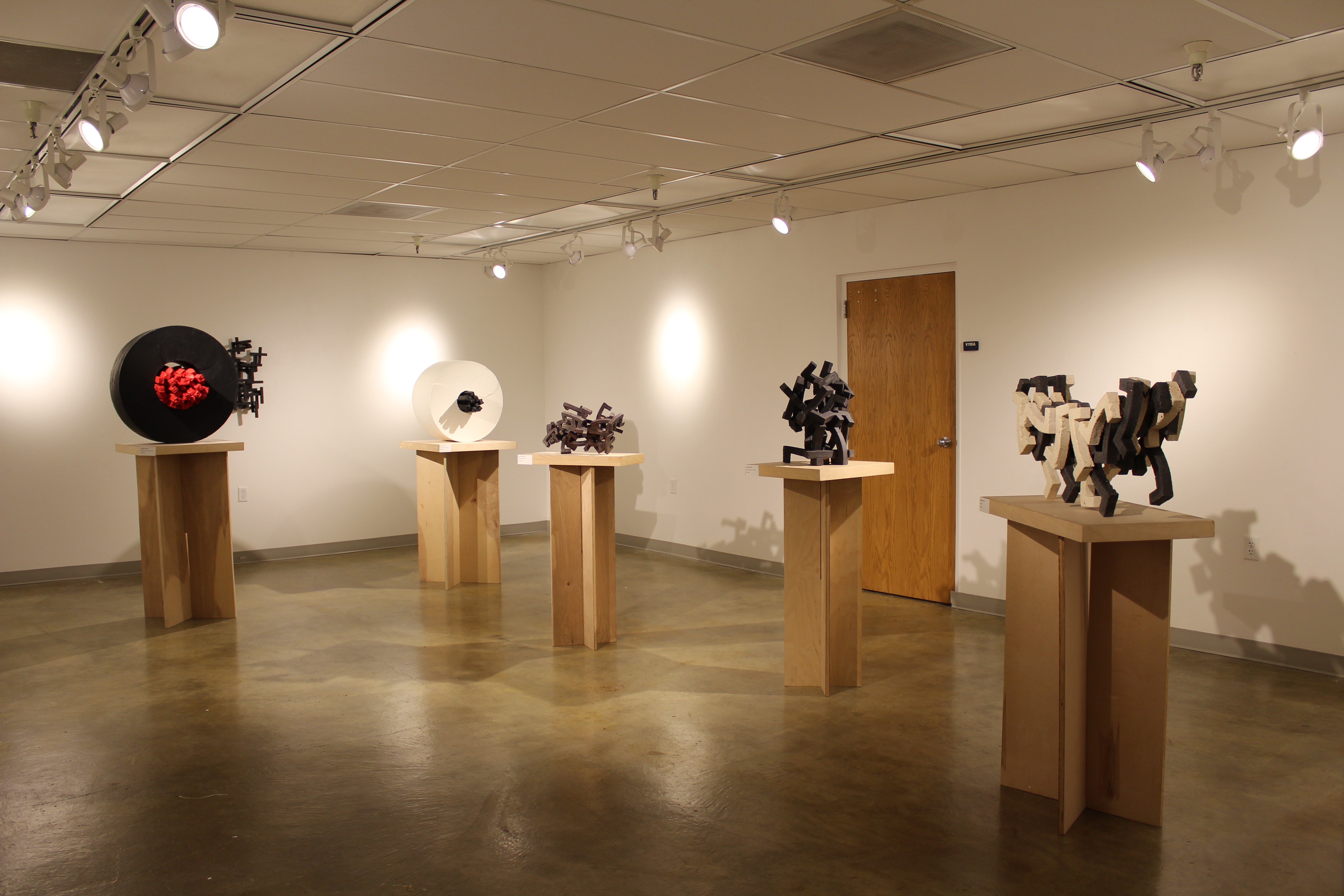 An exhibit of Joseph Pesina’s work.

Taking his education from an undergraduate to a graduate degree is the next step in Pesina’s career. He’s headed to Nova Scotia College of Art and Design in Canada to explore the historical context of art and how to approach employing it in his work, but from a contemporary point of view.

Pesina is currently spending the summer back in Door County. He’s working at the Peninsula School of Art and at Gills Rock Pottery with Thoreson.

“I thought it would be perfect for me to come back and be with my family, and to reconnect with the ceramic artists that really gave me my start and give back to them in some way.”