There are the requisite marching bands, clowns, and Clydesdales (and the dung they leave in their wake for little kids to step in as they chase candy – not that I know anything about that). This July 4th, also moving down Main Street in Egg Harbor and Baileys Harbor will be the classic cars, a few convertibles, and a lawn tractor pulling a wagon.

But in Door County, where the parades are of the decidedly small-town flavor, there are a handful of special floats and characters that have made the peninsula’s parades the “special” experience we’ve come to love.

The late Freddie K and the Rhythm Chicken have been ridiculed, kicked out, and screamed at. At other times, they’ve been beloved, cheered, lauded, and awarded. If they didn’t elicit such a diversity of emotions, they’d simply be boring. Camp David and Main Street Market bring a bit of laughter, creativity, and whimsy.

Together, they make for an interesting, if not extravagant, parade.

A fixture in Door County parade circles (including some unofficial parades, generally made up of one man, er, chicken) for a decade, the Rhythm Chicken may be the most bewildering of all parade participants. Appearing on the back of a pickup, Mr. Rhythm perches on a stool behind a simple stack of drums, wailing continuously throughout length of the parade, saying nothing.

The Rhythm Chicken cites Freddie Kodanko as an inspiration, and one might call the Chicken the heir to his throne of parade oddness.

You can try to describe him to the un-initiated, but good luck. Truth be told, his fuzzy head looks very much like a rabbit, not a chicken – but don’t try to tell him that. He is a chicken, he clucks, and that’s that. Your interpretation is unwelcome. 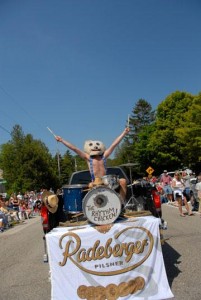 Try to tell someone what he does. That he’s not part of a band. That he just drums, and doesn’t play songs. That he plays wherever – and whenever – inspiration strikes, not as part of any paying gig or event. See where that description gets you. See if they understand any better.

But at the parade, locals cheer his arrival (well, most of them cheer), but visitors, upon their first Chicken experience, are often left awed. Well, maybe perplexed is a better word.

He rocks hard, banging his drums with unyielding energy. He is not accompanied by music. He just wails away, his long ears flipping and flopping with the beat.

At regular intervals he stops abruptly to raise his arms skyward in triumph, accepting the cheers and adulation of his followers. Then the parade moves on, and the beat goes on. The rhythm returned.

Perhaps there will be a sighting during this year’s parade. Perhaps not. Only the Chicken knows.

Before Door County experienced its modern-era boom as a tourist destination in the late 1980s, folks in Northern Door had plenty of time to devote to their parade floats. Elaborate creations weren’t entirely uncommon, and the red, white, and blue came out in full force for the holiday.

But as business grew, so did the demands on business owners to make the most of every business day in Door County. Gradually, folks devoted less and less time to the parade. But the folks at Camp David didn’t give up. 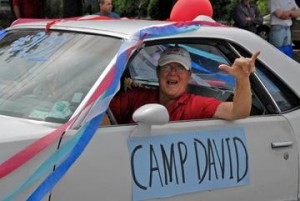 The Godfather of Camp David leads their float.

Most years a sizable percentage of the residents of Dave Ellmann’s Fish Creek compound and Party Barn take part in the building and riding of the float, which once took the shape of a giant birthday cake.

Somewhere along the line someone decided to start bombing the Camp David Float with water balloons, a tradition that has continued, largely without injury. On the hottest of holidays, it’s even welcomed.

Drill teams are nothing new to parade lineups, but when Egg Harbor’s Main Street Market introduced the shopping cart drill squadron to the parade in 1988, the crew broke new ground. 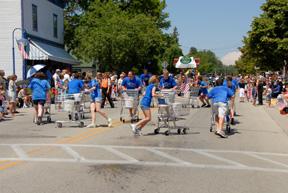 The Main Street Market squadron breaks into its routine.

Clad in blue Main Street Market t-shirts and stationed behind empty, rattling carts, the squadron of stock-boys, check-out girls, and other staff perform an intricately choreographed routine of movements that takes all of 20 minutes to practice.

Steve Northrop, who along with wife Kaaren and her parents Dave and Vonnie Callsen run the store, came up with the idea after seeing a lawnmower brigade perform a similar routine.

In the years since it’s earned wild applause, laughter, and more than a few water balloon ambushes (especially near the dangerous Casey’s corridor in Egg Harbor).

Some staffers are a bit hesitant to join in the drill team at first, but Northrop said it’s become a tradition.

“Some kids even come back to do it after they’re done working,” he said.

His title was a bit misleading. He didn’t record his own polka music, or even play the polka of others. He played cassette tapes of polka music in a boom box.

He joined the parade on his tractor (which he drove everywhere because he lost his license due to drinking and driving around 1960), with someone pulling him along on a trailer. He sat there on a “throne” made out of a crappy old chair with a blanket over it, and he made noise along with the music blaring from his boom box. He clanged boards together, used noisemakers, and generally had a gay old time. 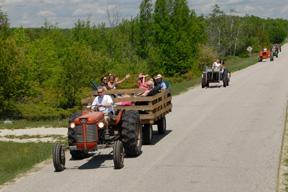 Stingl wrote in 2000 that Kodanko “wears a blue cape and jewel-studded crown that his neighbor Bonnie made for him from a tent he found in the trash. He plays his boombox and bangs along, creating a sight that stays in your memory longer than any marching band in the parade that day.”

That’s no slight on the marching band, just a tribute to how odd Kodanko’s show really was.

He was not always welcomed with open arms. He was once told he couldn’t be a part of Fish Creek Days at Clark Park, but Ann Norz told him he could park in front of the Fish Creek General Store instead, not far from the festivities. That seemed to work for him.

Though Kodanko died in 2002, it will be a long time before folks around here forget the Door County Polka King.