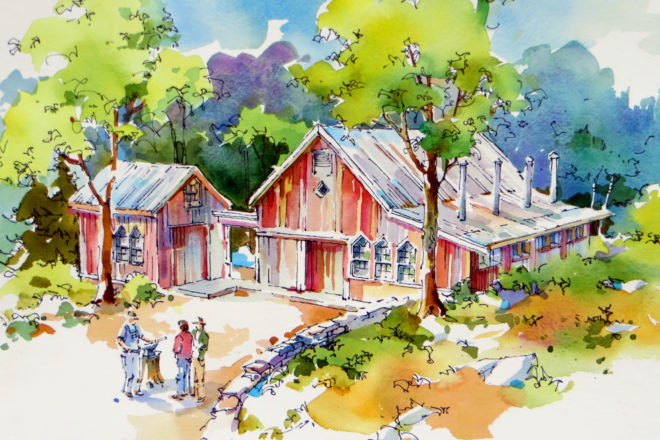 Watercolor rendering of The Forge by Bridget Austin.

Still firm ground and a light mist did nothing to dampen the spirits of a group of The Clearing’s staff, board members and supporters who attended the symbolic May 12 groundbreaking for the folk school’s newest addition: a 1,400-square-foot blacksmithing and metal craft workshop.

“We’re excited about being able to do metal craft at The Clearing, especially forging or metalsmithing,” said The Clearing’s Executive Director Mike Schneider. “It’s something we thought about for a long time and we’re just tickled that we can finally see that it’s going forward. A lot of people have expressed interest in taking classes, especially in forging, but also we’ve had people come to us to say that when the timing is right, they’d like to teach forging. We’re excited about the prospects.”

The Forge has been a dream of The Clearing since construction of the school’s Workshop (which hosts wood, glass and paper art classes) in 2007 but it wasn’t until a significant donation by Baileys Harbor resident Jean Barrett that the school was able to make the project a reality.

Barrett’s late husband, David Nevalainen, was a hobby blacksmith who had established The Forge at Cedar Ponds north of Baileys Harbor, where he taught classes independently and for The Clearing. Nevalainen died in 2008 and a couple years later, Barrett offered to donate her husband’s blacksmithing tools, equipment and supplies to The Clearing.

“We thought about a forge before that when we built our Workshop but it had to be a separate building we found out and the workshop was enough of a chunk to bite off at that time so we put it on the backburner,” said The Clearing’s Executive Director Mike Schneider. “When Jean made the offer, it was a pretty easy decision to accept her donation of all that equipment and put The Forge on the front burner.”

“It just seemed like the proper place to put a very special, unique type of craft, hobby, activity,” Barrett said. “And The Clearing being a folk school, it fit right into their whole plan and interest. It was a win-win for both situations.” 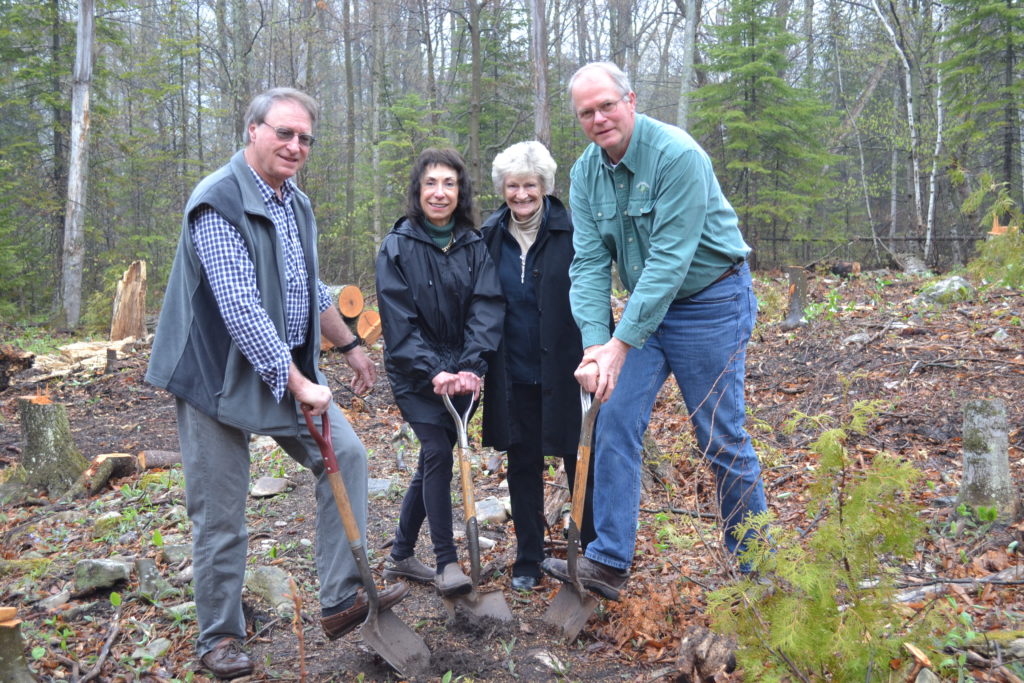 (From left) The Clearing’s board president Gary Chaudoir, life member of The Clearing Jean Barrett, past president Carolyn Kimbel, and The Clearing’s Executive Director Mike Schneider break ground on The Forge. Photo by Alyssa Skiba.

For the past five years, the folk school has been fundraising to meet its $325,000 goal through raffles, community events and donations. Schneider said the school is approximately $16,000 from reaching its goal and hopes to close the gap through sale of raffle tickets for its annual raffle and The Clearing Speaks art and craft raffle, as well as this year’s Pass the Hat for The Clearing fundraiser, an annual fundraising event for special projects at the school.

“We still have some money to raise but we’re confident that that won’t be a problem,” Schneider said. “It feels great. This has been five years in the making and we’ve been more aggressively raising funds for four years. Fundraising is never easy but you have to ask. That’s the first rule of fundraising: you have to ask. The Clearing has never borrowed money for anything. It’s always been The Clearing’s philosophy to wait until we have the money in hand before we start a major project so it can take several years for them to break ground.”

The Forge will be built near the Workshop and will operate year round. Construction will include reclaimed lumber donated by Roger Kuhns as well as classic Door County stonework. A small storage building near the construction site was framed by a Clearing class last summer, and will house metal stock for classes.

While Schneider admits they “could have put up a pole barn and it would have functioned,” it was important that The Forge maintain the design aesthetics established throughout the property by The Clearing’s founder, Jens Jensen.

“When we were building our workshop building back in 2006-07, I remember Tim Stone, who was the board president at the time here and was for many years, there were a few people out in the community who said, ‘Why are you building such a nice building? You could build something not as nice and it would certainly serve the purpose,’ and Tim said something that I never forgot – that Jens Jensen set the bar high when it comes to buildings at The Clearing and we’re not going to lower it now,” Schneider said.

Schneider expects classes to begin in The Forge during The Clearing’s winter program in January 2017.

To donate to The Forge, visit TheClearing.org and click on “Support.”