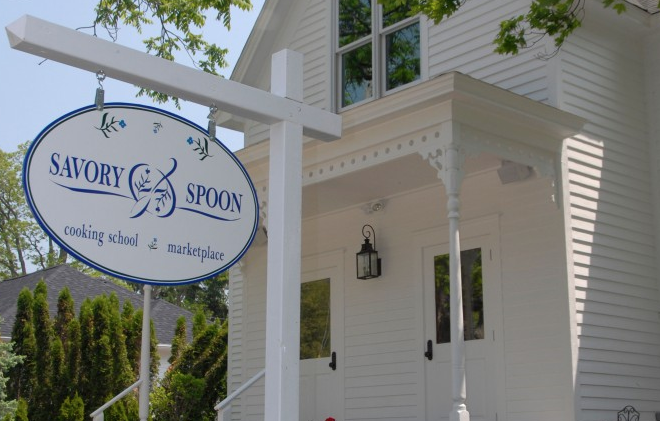 Right on the main drag of Highway 57 in Ellison Bay sits a modest, two story home. It is the type of home that a person can drive by quite literally hundreds of times without noticing. It is unassuming and may not spark the interest of the average passerby. The moment it starts to get interesting, though, is when you talk to one of the building’s new owners, Michael Thomas.

Michael and his wife Janice are the owners of the Savory Spoon Cooking School, in existence since 2004. The school offers a wide range of cooking classes and private events from June through October. Although the couple was happy with the school operating out of their restored 1847 log home, someone who knows Michael’s affinity for older home restoration happened to mention the “little schoolhouse” for sale in downtown Ellison Bay. “It wasn’t something we were looking for,”Michael says, but he soon went to work on not only the restoration of the building itself –?but on the renovation of its proper place in Ellison Bay history.

In 1878, none other than John Eliason, founder of Ellison Bay, deeded the property to the town with the intended purpose of building a school. A small, crude building was erected and the school opened its doors to students in 1879. The school remained in service until its replacement was built just up the street on Garrett Bay Road (now the site of a park). Michael relays a story that when it came time to actually move the contents of the school, the children were the ones required to walk the books to the new location. When the children returned to get more books from the school, Gus Klenke (of the famous Gus Klenke garage) was waiting on the corner with ice cream for the grateful students.

Michael has put in hours and hours with local residents trying to compile a complete history on the schoolhouse, offering on at least one occasion to clean an attic and a basement to help a woman find the photos of the building in its various incarnations. Michael has copious notes, photos, and copies of original documents, including the first deed from John Eliason in a folder he keeps with him. It is obvious that the physical renovation of the building is only half the fun for the self-described “history nut.”

Not much of the original structure could be salvaged. “This place was a mess!” laughs Michael of his initial impression. “We had to take everything down to bare wood.” Janice and Michael did a lot of the “non-glory” work themselves. Sanding, staining and varnishing baseboards, stripping wood, and painting all of the interior are just a few of the things they worked on over the winter. Michael has a knowledge and experience gained from several restaurant renovations in his and Janice’s second home of Arizona. Most of the previous restaurants have been large, with some seating more than 200, but they have helped Michael gain a familiarity with the industry and its workers. Michael’s relationships with his sub-contractors seem affable; there is easy banter and you can see the respect is mutual. During my interview with Michael, for example, he at one point stopped and got on the floor with his plumber to show him how and where to hook up the icemaker.

“Compliance with current codes was a huge effort,” Michael asserts. There are two fully-functioning gourmet kitchens complete with commercial stainless Wolf/Sub Zero appliances. In keeping everything up to code, certain historical aspects had to be put aside. Windows needed to be replaced with tempered glass and an imposing ventilation hood took the place of one of them. The floors, exterior siding and a porch, which was added in the 1900s, are still original to the building, however.

Michael and Janice created the entire design for the remodel with very few changes from Janice’s former school kitchen. Wonderful refrigerated drawers on a butcher-block island keep ingredients fresh and close by, and there are other great amenities such as warming drawers and double ovens. In the clean-up area Michael and Janice consulted with one of their employees on how to arrange the sinks and disposal, and they have also installed a commercial dishwasher that reduces the cycle time from a previous 75 minutes to less than one! Throughout the interior, the use of color is sophisticated, subtle and creates a feeling of warmth and intimacy. Warm gold cabinetry with accents of barn red give a comfortable and relaxed atmosphere. The cabinet facings throughout the rooms are varied but remain connected through the color scheme.

Michael claims Janice was “slow to become enthused” about the move, but during this past year of renovation she has jumped on board with boundless energy. Relocating the Savory Spoon to a larger space offers the couple and the school several benefits. Slightly larger class sizes and more space are obvious perks. Perhaps the most exciting benefit, though, will be the addition of the Savory Spoon Marketplace – a retail space located right inside the school. The extra space allows the sale of gourmet food items as well as homemade pastas, sauces and bread on a daily basis. The Thomases wanted to be sensitive to other kitchen and specialty food retailers in the area and maintain that they will try not to sell items available other places in the county.

The separate entrance for the Marketplace is another way that Michael was able to preserve some of the integrity of the original structure. Since the building served as Ellison Bay’s Post Office from 1931 to 1944, the layout had to allow the post office a separate entrance from the family home. This separation lends itself nicely to the retail space and school for today’s use and allows them to have separate operational hours.

It’s easy to see that historical renovation is something Michael and Janice Thomas truly enjoy. Meticulous research and documentation show their concern for the value of the building to the community. Many of the people Michael has spoken with for information are in their 80s and without taking the time to extract information, a lot of local history could have been lost. How refreshing to see an important historical building saved at the hands of a couple who took the time, energy and expense to preserve one of the original buildings of Ellison Bay. Michael and Janice have helped Ellison Bay’s first schoolhouse come full circle to once again be a place where students come to learn and the transformation has been a labor of love. For a small, unassuming building, the Savory Spoon is sure to have a huge presence.