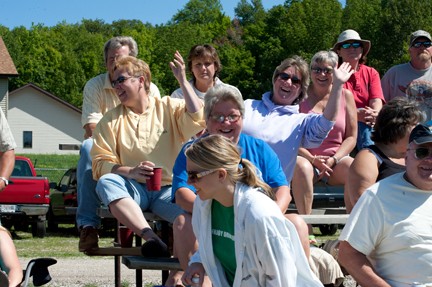 Washington Island fans are known for traveling in droves to support their team, such as this crowd of Islanders that invaded Egg Harbor’s ballpark for the 2009 playoff title game. Photo by Dan Eggert.

It’s amateur baseball played by aging sluggers, some of whom fit a little too snugly into a less-than-flattering uniform. Fans don’t turn out in droves for rec league volleyball, winter league basketball, or bowling, so why do so many people care so much about Door County League baseball?

“It’s good baseball,” says Jeff Pfeifer, who played for 10 years and frequents Sister Bay Bays games. “Plus, it’s played on Sundays in the sun, and it’s a chance to see friends and cheer for sons, uncles, grandsons. It’s good entertainment.”

Fans around the peninsula plan their Sundays around the ball games, and they’ll turn out in droves for a winner. But the love affair goes deeper. I spent this spring reviewing family histories for a collection put together by the Egg Harbor Historical Society. I was amazed by how many people, when given just a few lines to sum up their life or the life of a relative, would use one of them to note the position and team they played for in the Door County League.

But as seriously as residents take their local baseball all over the peninsula, no fan base is as rabid as those on Washington Island. 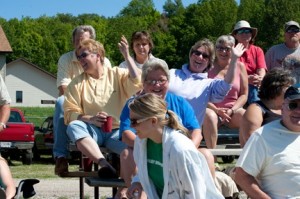 Washington Island fans are known for traveling in droves to support their team, such as this crowd of Islanders that invaded Egg Harbor’s ballpark for the 2009 playoff title game.

“You won’t get an argument there,” Pfeifer says shaking his head.

“You’d have to say they’re the most devoted,” says Rick Gigot, who played for both Kolberg and Maplewood. “The isolation up there, there’s not a whole lot to do. Plus, they like to party.”

That they do. Gigot swears he’s seen close to 500 people show up for games on Washington Island. Fans of opposing teams mark the island game on their calendar, relishing the chance for a ferry ride and an island adventure. The Islanders, well, they mark every Sunday.

Ted Jorgenson, who played for or managed the Islanders from 1971 – 2001, says the reason Island fans are so committed is simple.

“It’s about the only form of entertainment we have up here,” he says. “It’s the kind of following we’ve always had, and I think it’s really kind of special. We don’t get Legion baseball games or high school games, so these are our big games.”

Island fans can be rough on the opposition, taunting, howling, and harassing from the first pitch to the last. Jorgenson and Gigot say the trash talk ends on the field, however.

“It would get heated, but when the game ended you all get along, go out, and party together,” Gigot says.

What makes Island fans so impressive isn’t that they turn out for home games, but how they travel. The team can count on 50 – 70 fans traveling to games on the mainland, and it’s not entirely uncommon for more than 100 Island fans to invade an opposing ballpark, a traveling home field advantage.

It’s why the Islanders, despite their isolation, are such a crucial part of the story of Door County League baseball.