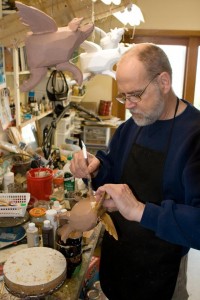 David Frykman at work in his studio. Photo by Heather Harle Frykman.

The path a potter takes to become a woodcarver might well be as winding as a country road and as filled with interesting detours. Such was the route David Frykman followed in 1974 when he opened his Sister Bay pottery studio on Highway 42 across from the Bay Ridge Golf Course. This January he and his wife Carole purchased the Jack Anderson Gallery building just a stone’s throw up the road, for the new Frykman Studio Gallery, a showcase of his wood carvings along with the photography of his son Luke Frykman and daughter-in-law Heather Harle Frykman.

Frykman laughed as he said, “The story of how I became a wood carver has been told pretty often.” But he agreed to tell it again.

He sold the pottery studio in 1984 and built the Open Hearth Lodge on the land next to it, the decision to become an innkeeper driven by financial considerations.

In 1990 the Frykmans sold the motel, and fortuitously, chef Marc Paulson asked Dave Frykman to carve an ice sculpture for his restaurant’s entry in the Fish Creek Winter Festival. The late woodcarver Pudge De Graff was the judge, and Frykman’s piece won.

He laughed recalling the event. “I had studied sculpting in school,” he said, “and working with clay I understood mass and negative space. I was up against chefs who had received minimal instructions in ice carving for buffet tables!”

He took second in a statewide ice carving competition, subsequently gave demonstrations, and became a consultant. 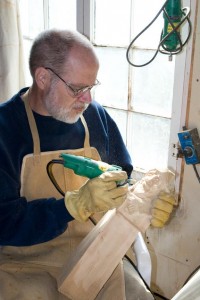 The transition from carving ice to carving wood was a small step for him. In fact, he even used some of the same tools, such as die grinders and a 4 1/2 inch angle grinder with a chainsaw blade or sanding disk. He favors Dremel tools, a band saw, a disk sander, and a two horsepower dust collector, over a traditional hobby store wood carving set.

“I learned to work quickly as a potter,” he said. “The clay dries out.”

But while throwing pots is an additive process, carving is reductive. However, as Frykman’s son Luke pointed out, the woodcarvings are not entirely reductive. Occasionally component parts will be carved separately and then affixed to the body of the sculpture, as in the case of a wading bird with long legs, wings, and a bill.

Frykman earned a national reputation as a woodcarver in part because of his work with Coyne’s, a company in Minneapolis that in 1994 began buying rights to his pieces for reproduction and distribution to retailers about the country. While Frykman now concentrates on creating original work, he continues to produce an exclusive reproduction piece each year for the Sister Bay holiday shop Tannenbaum, as he has a following of collectors.

Luke and Heather became involved in the gallery in 2004 when they moved back to Wisconsin from California. The young couple had painted and finished carvings that Frykman sent to them in California for sales there as well as in Wisconsin, and when they came home, the pair learned to carve themselves. To accommodate the family operation, Frykman purchased the former Berch Tree building in Ellison Bay for the David Frykman Studio gallery.

But again plans took a turn, and the Ellison Bay gallery began displaying photography as well as woodcarvings. “We had walls to fill!” Luke joked.

Heather had majored in communications in college with the thought of becoming a photojournalist. In California she worked as a commercial portrait photographer, but she found that she enjoyed nature photography far more than shooting news photos or portraits.

“The fast pace of the portrait work helped me develop the quickness I needed for nature photography,” she said, “especially shooting birds!” She began working as a free-lance photographer in California, which led to the need for a better camera, which in turn led to Luke getting involved in photography as well. Now the couple occasionally rises at 4 am in pursuit of good light for shooting wildlife.

“I had been a hobby photographer,” he said, “learning by using my dad’s camera. But when we got Heather a good camera – I love new gear – I became more serious about photography.”

“He’s a gear junkie!” Heather laughed, and smiling, he agreed.

While Luke has no formal training in photography beyond high school, he has in a sense been an apprentice all his life, growing up with an artist for a father. “I can recognize good work, and I learn from Dad’s critiques. And a digital camera, with all of its technical possibilities, is a great teaching tool.”

Both Heather and Luke have placed well in the photo division of the annual Hal Grutzmacher Writer’s Exposé and Photography Jubilee.

Now, in addition to their work as photographers, Heather cuts mats and Luke builds frames. Heather also oversees the Web site that sells Frykman’s carvings and their photographs.

And then the Jack Anderson Gallery building came on the market. “This place is bigger and a better location,” Frykman said. “When it became available, we needed to think seriously about the move, and we did!”

The new Frykman Gallery had its grand opening on May 10. The interior of the building has been reconfigured to accommodate the display of the carvings and photography of the Frykmans, along with the pottery and sculpted objects of Canadian potter Steve Jorgenson, a friend of David Frykman since his studies at Bethel College in St. Paul. 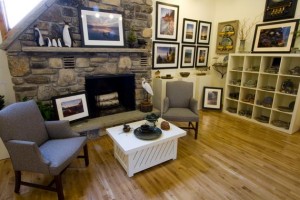 Carole Frykman used her expertise in interior design to make aesthetic decisions about color and light in the remodeling of the gallery and in the hanging and display of artwork in the gallery.

The new gallery offers a work nook for Frykman to paint his carvings (the messiness of carving process requires a separate wood shop space), an upstairs studio for Heather to cut mats, and an adjacent building for Luke to build frames.

Visitors to the gallery will see Frykman’s carvings of Santas (one room is devoted to Christmas pieces), of characters, of wildlife, and one elaborate chess set. The nature photography of Heather and Luke includes landscapes, wildlife, wildflowers, and Door County landmarks.

The gallery, which is open year round, is unique both in its ties to Door County and in its family operation. Art certainly runs in the family; the Frykman’s daughter Sara, who is married and has a child, was trained as an artist, and their son Tyler is a college student in multi-media design.

And where might that path that took David Frykman from potter to innkeeper to ice carver to wood carver to gallery owner lead next? He laughed but doesn’t make predictions. “We’ll do this for awhile,” he said, “and see where it goes!”