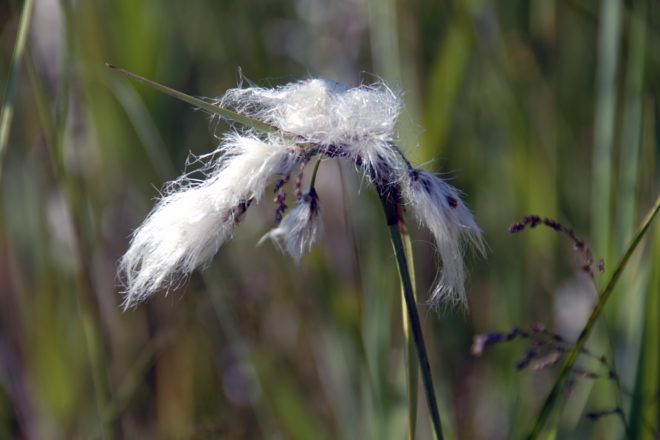 A close-up view of a single cotton grass stalk shows how long the white hairs are. Photo by Roy Lukes.

A good friend sent me a picture of a very unusual plant that she saw while walking on a trail in a northern Wisconsin bog. I had seen it years ago, so I remembered its identity. It was a plume of cotton grass. For my late husband, Roy, it was a favorite northern-area plant in the fall.

Roy and I enjoyed many summer and fall trips to the Upper Peninsula of Michigan, where there are areas with great stretches of wild, undeveloped land, which makes the region a fabulous place to study plants. Far-northern Wisconsin also has numerous bogs.

Cotton grass is actually a type of sedge and is in the Cyperaceae family. Its scientific name is Eriophorum (air-ee-oh-FOR-um) angustifolium (an-gus-ti-FO-lee-um). This plant does well in acidic-soil wetlands and grows across the North Temperate Zone all the way into the Arctic.

It has small green and brown flowers in summer that become fertilized to form the white seed heads adorned with long, soft, white hairs, giving them the appearance of cotton balls. It sits on tall, thin stalks above the other plants nearby.

Perhaps the long hairs aid in seed dispersal when they’re caught in strong winds. They may act like the common milkweed seeds, which burst from their pods in late fall and fill the air with white, downy parachutes.

I remember Roy talking about sawgrass when we visited Florida’s Everglades about 25 years ago. The national park guide explained to our tour group that the sawgrass covered a wide area in the wetlands where alligators lived. Roy asked her whether she realized that this grass is really a form of sedge. She nodded. Then Roy said it would sound funny to call it “saw-sedge” (sausage), and in the warm months, we could call it “summer saw-sedge.” She didn’t appreciate his word play.

Friends have remarked about the cedar trees in Door County that are heavily laden with cones. I began to see them developing back in July when they were still green and blended in with the foliage. Now, however, they are ripening, maturing and changing to tan, which makes them so noticeable on the trees.

We often saw trees produce an abundance of seeds in some years of draught when they were under stress. It was as though they were boosting their reproduction efforts to ensure they would survive.

The springs of 2018 and 2019 have presented us with heavy snowfalls and cold temperatures. In May 2018, I recorded more than five inches of rain after the terrible snowstorms of April. A friend told me that the soil temperature at his gardens on Memorial Day was only 50 degrees, which is too cold to plant many types of seeds.

This year, after getting 75 inches of snow from early January to March, I had another five inches of rain in the abnormally cold month of May. The same friend measured the soil temperature on Memorial Day and found it was 52 degrees – still too cold and wet. Remember how late the corn was planted this year? Maybe these weather conditions made the trees produce a bumper crop of seeds to help secure their future.

One of our favorite seeds of fall in the upland hardwood forest around our home is that of the wild leek. We marvel at how the leek leaves are the first plants to green up the spring woodland, but their leaves turn yellow and disappear by early June. The onion-like flower blooms in July, and after the small, white petals fall, the tiny, round seeds develop. By late September, the eight-to-10-inch stems carry the ripening seeds, which look and feel like black buckshot. Between 10 and 20 form on each plant, and we have no idea whether any creature consumes them.

We used to have a big vegetable garden, and by early fall, the weeds took over, supplying an astounding number of nutritious seeds for wildlife. One pigweed plant is capable of producing as many as a million seeds. It is quite exciting to see several hundred wintering common redpolls feasting in a snow-covered field decorated with the rigid, upright stalks of the previous summer’s pigweeds.

Think about how humans consume seeds as part of our diet. We would perish without seeds! There aren’t many foods that we eat that aren’t directly or indirectly related to seeds: We eat seeds themselves; we eat that which grows from them; and we eat that which feeds upon them or the plants that grow from them.

Most seeds are small, but they hold the promise of the future within their thin cases. Don’t underestimate the astounding power of a seed!