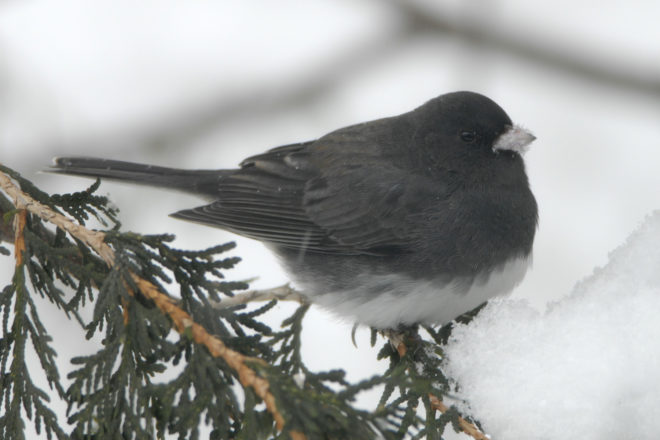 A dark-eyed junco fluffs up its feathers as it rests in the cedar tree waiting for a place to eat on the ground. Photo by Roy Lukes. 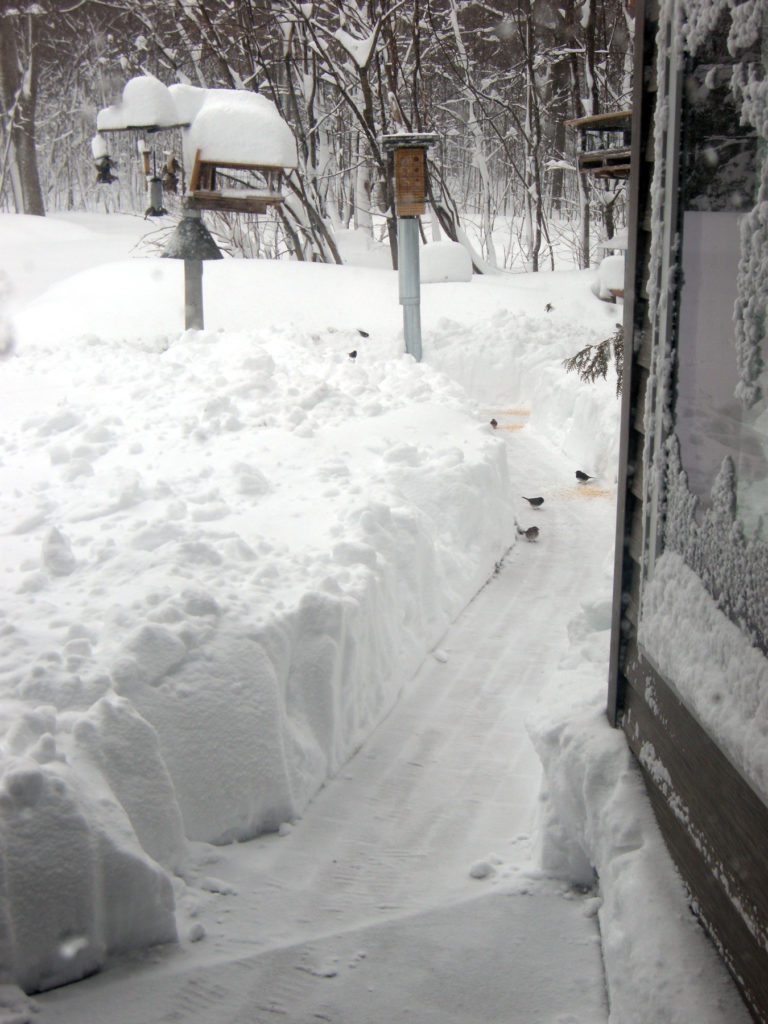 Here’s the view on April 14 from Charlotte’s front door of the path to the feeders with a few juncos eating cracked corn. Photo by Charlotte Lukes.

The story I intended to write for the last Friday in April would have reveled in the glories of bloodroot flowers. As I sit at the computer during our second snowstorm of the weekend on April 15 it makes me think differently. Perhaps the ground will still be covered with snow in late April. Here at my home I have received nearly 35 inches of snow since April 4.

One of my favorite sites on the internet is NOAA’s Climate Prediction Center. It is updated every afternoon and gives the 6- to 10-day, 7- to 14-day and 3- to 4-week weather outlooks for the nation, both in temperature and precipitation. The latest report indicated we will have average to below normal temperatures from now until May 11.

This morning my bird feeders are being filled with blowing snow while a huge flock of red-winged blackbirds, common grackles, brown-headed cowbirds and European starlings fight for food on the platforms and scattered on the ground. The first myrtle warbler, formerly called yellow-rumped, was seen here on April 1. They are hardy birds that usually are the earliest of the warblers to arrive in spring and last to leave in fall.

The myrtle warblers have learned to get inside the wire cage and eat Marvel Meal, a lard, peanut butter, oatmeal and cornmeal mixture put out for the woodpeckers. Unfortunately the starlings have also learned how to get at that food and are the most defensive in fending off other birds. Even the pileated woodpeckers retreat from the starlings.

I try to get out and shovel the area near the feeders every 90 minutes and scatter a fresh batch of cracked corn. There have been small bird tracks in the light snow right in front of the lower level windows so I cleaned that spot and scattered corn and hulled sunflower seed there. Now the juncos, tree sparrows, a song sparrow and a migrating fox sparrow have a secluded spot to eat away from the clamor of the blackbird tribe.

This April has brought northeast Wisconsin the most snow on record for the month. We have learned that global climate change is affecting weather patterns all over this earth. Ocean levels are rising and warming temperatures of the waters can make hurricanes more intense. The southern parts of the United States have had more flooding rains in the last few years. Jet stream patterns also seem to be altered and perhaps that is why we are getting this January weather when it should be spring.

A new study published in the journal Nature finds that a major system of the Atlantic Ocean currents, called AMOC, Atlantic meridional overturning circulation, is slowing down. It carries millions of cubic meters of water north every day.

It moves warm water from the Gulf of Mexico north to Greenland where it gets colder, sinks and moves back south. However, years of melting glaciers in Greenland is sending massive amounts of fresh water into the North Atlantic. This water is less dense than the saltwater of the ocean and does not sink. Thereby it is slowing the regular circulation.

This spells trouble for much of America’s east coast as waters warm and sea levels continue to rise. The change in ocean currents has shown, in recent studies, that U.S. fisheries will be devastated by the warming waters. Fish that used to be off the northeast coast will have to live further north in the colder water they are accustomed to.

Many scientists say, as they have for a long time, that reducing carbon emissions could play a beneficial role in slowing this climate change.

Twenty years ago Roy and I attended a conference on the future of human society as our nation continues to grow. One factor that is seldom addressed is population growth. It was stressed at that meeting how many more homes, schools, hospitals and roads will be needed with increasing population and how many wildlife habitats will be lost. Even now addressing our need for infrastructure upgrades seems to be falling by the wayside. 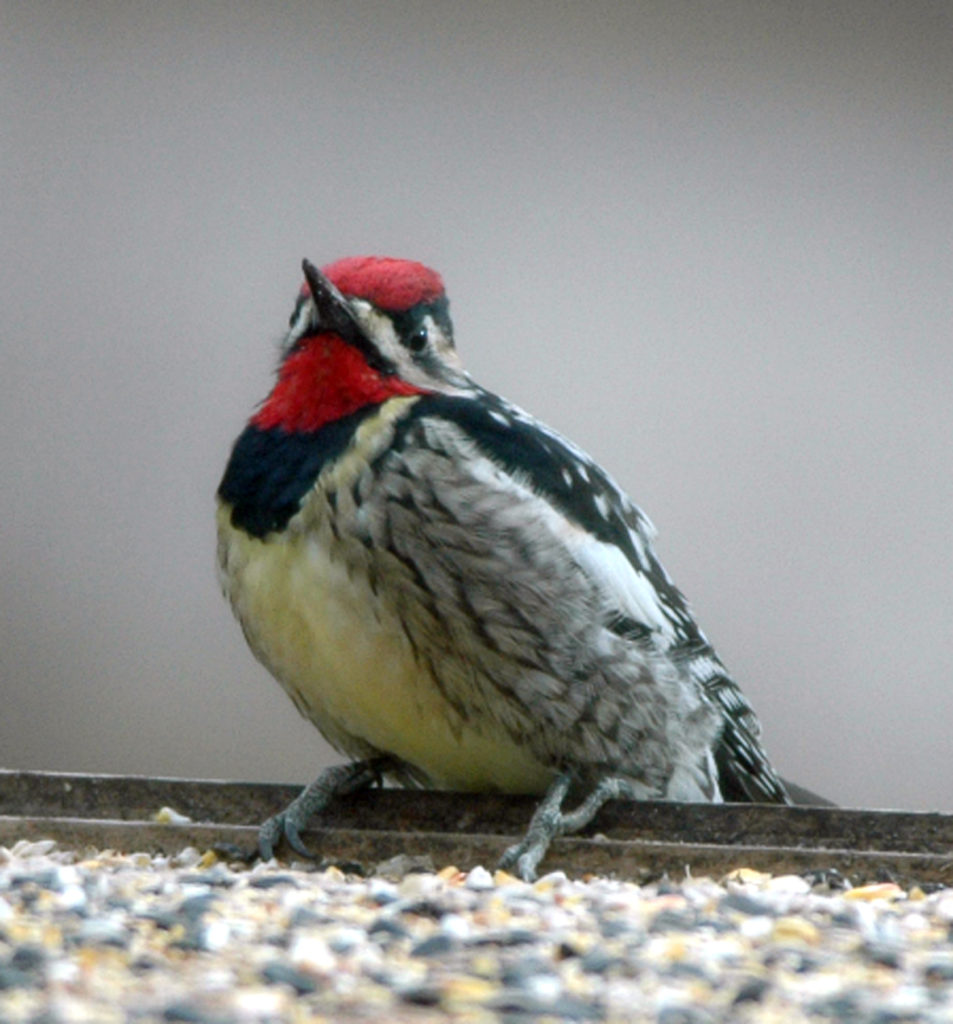 A male yellow-bellied sapsucker shows its yellow belly. He was the last of 25 bird species to arrive in my yard on the day of the severe windy snowstorm of April 15. Photo by Roy Lukes.

Well, I am getting off my subject of our changing weather and how we must adapt to the gradual effects of global climate change. Unfortunately wildlife cannot change as rapidly as these weather patterns. During this weekend’s snowstorms, rated the worst in 100 years in northeast Wisconsin, I tallied 25 species of birds fighting for seeds and cracked corn in the feeders and the few places I could shovel on the sidewalks.

Sandhill cranes arrived March 1 and many other field-nesting species are here like horned larks, killdeer, red-winged blackbirds and meadowlarks. American woodcocks probe their long bills into the soft earth to find worms. Cavity-nesting birds such as American kestrels and eastern bluebirds require insects for much of their food. This heavy snow cover and extended cold temperatures will keep insects and earthworms out of sight for a long time and I’m afraid many birds will die of starvation.

Roy kept a daily log, a phenology of sorts, for most of his life noting the arrival of migrating birds and the blossoming dates of wildflowers. In many years the hepaticas would be blooming by now and the wild leek leaves would be turning our drab brown woods into a lush green carpet.

Our native bird populations have been at risk for many years due to the radical changes in their wintering habitats in Central and South America. Now, with this drastic winter weather, they must face some devastating situations on their breeding grounds.

All I can say is try to help as many birds as you can by providing food and shelter, and hope for sunny warmer days to arrive as soon as possible.