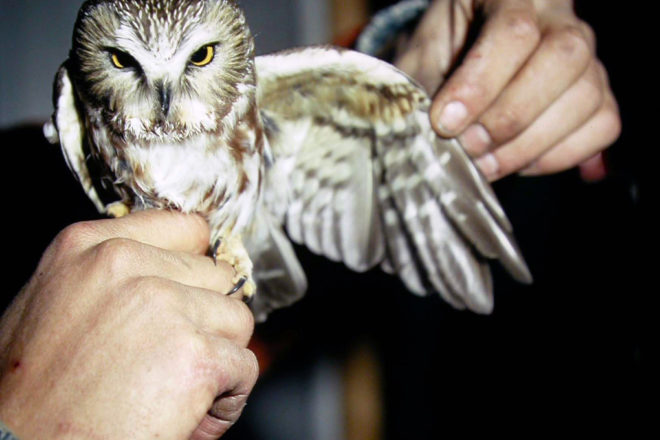 Our friend Tom Erdmann holds a saw-whet owl that he captured to study and band. Photo by Roy Lukes.

There exists a bird of prey in eastern North America so lovely and dainty on the one hand yet such a fearless little dynamo when it comes to killing rats and mice – the saw-whet owl. Even though it ranges throughout much of the northern United States and temperate Canada, relatively few people ever see or hear one of these plucky seven-and-one-half-inch birds.

A friend on Washington Island sent me a report last week of one found and photographed in someone’s barn on the island. The other small owl occasionally seen in the region is the Eastern screech owl. Since both of these species do not visit bird feeders and tend to be more active at night they are seldom seen. Perhaps their songs are heard more than people realize.

I remember a night when we lived in Baileys Harbor and were leaving home after supper to go to our church for choir practice. We heard a raspy, metallic, monotone sound almost like someone sharpening a saw. Suddenly the pitch lowered slightly and stopped. Within five seconds it started again. When we heard an answering sound, one note lower (what beautiful dissonance!) from across the road we realized what they were, saw-whet owls! Roy began humming the note so he could remember it when we arrived at church.

The second Roy entered the building he went straight to our organist Betty, hummed the note, and asked her to find the pitch on the piano keyboard. It turned out to be D, above middle C. Naturally she and the others wanted to find the reason for this question. When Roy told her that it was the pitch of a singing saw-whet owl that we heard as we got into our car she said, “Oh my gosh. I heard that song too as I left the house tonight but didn’t know what it was.” She happened to live across the street, within a quarter-mile of our home.

The only reason Roy knew what was making the monotone short whistled calls, “WHOOOK WHOOOK WHOOOK,” about three every two seconds, is because he had listened to their calls on records in the past. Even though this song is only one of several this miniature owl can give it is about as un-owl-like as one could imagine. It doesn’t even remotely approach the great horned owl, concert master of the night woods, and its “HUbow, HUbow, HUbow” call, or the barred owl’s “who cooks, who cooks, who cooks for YOUall.” 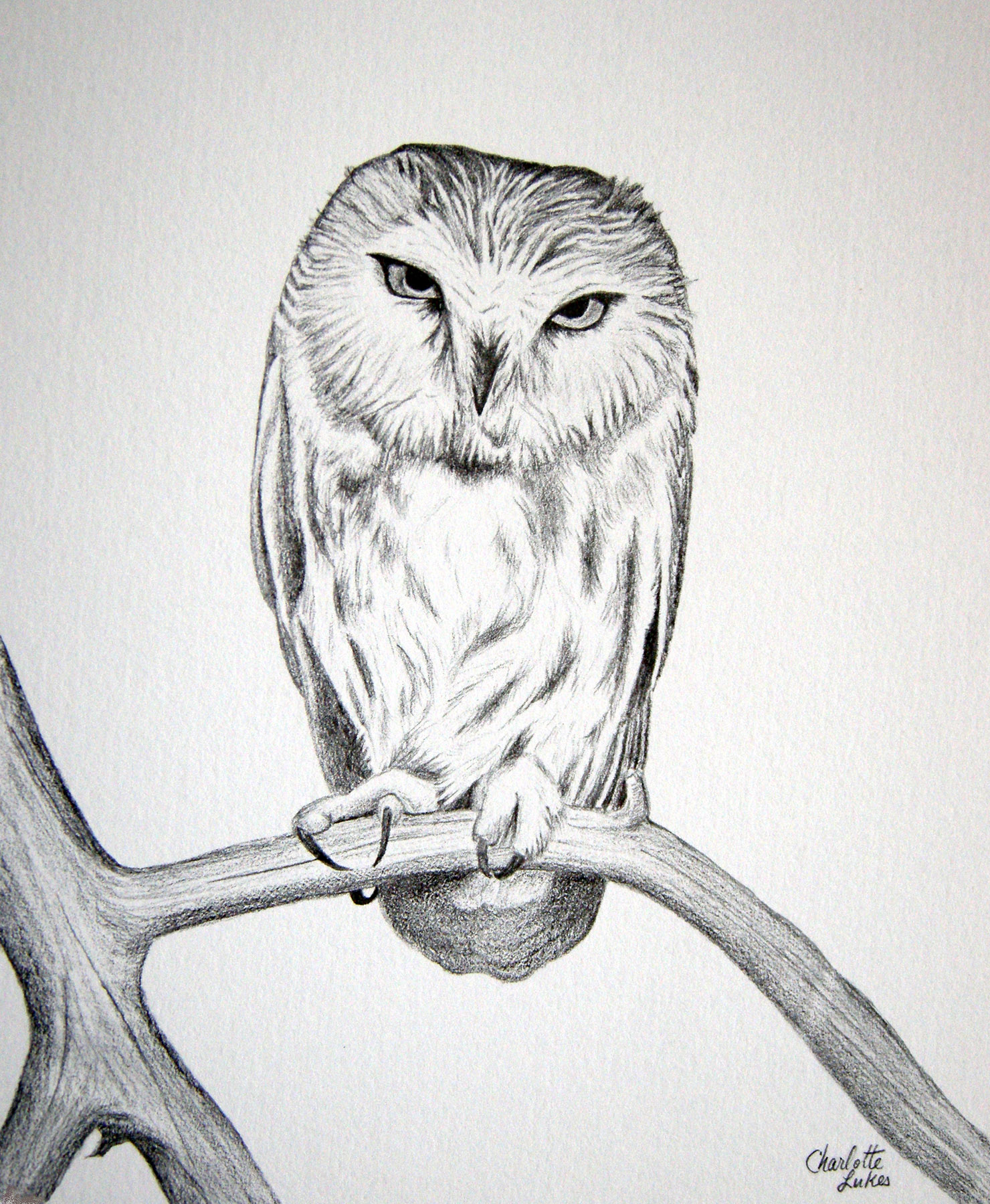 Charlotte Lukes had the opportunity to see the banded saw-whet owl as it sat on a tree limb, so she made a drawing.

It’s hard to imagine an adult owl of this region weighing about three and seven-tenths ounces. Many of you can visualize the size of a flicker. In fact the saw-whet owl, about three inches shorter, will frequently nest in an old flicker cavity. Their home is usually the dark coniferous forest. It is often the clamor of some robins, blue jays or even chickadees that will lead you to one of these exquisite, almost melancholy-looking owls perched usually within four or five feet of the ground, extremely tame and content to sit and watch you intently.

Years ago a dead saw-whet was found by one of Roy’s students and was brought to him at the Fish Creek school. As they examined it they were impressed with its very soft, downy feathers. Being a northern owl it had heavily feathered legs, warm insulation to protect against severe winter cold. It was chocolate brown above with fine streaks, white below with rather broad brown stripes. Its talons were needle sharp, and they marveled at the tacky feel of the rough skin on the bottoms of its feet. What a perfect gripping surface!

These gallant little owls have been known to kill prey larger than themselves. Mice, young rats, red squirrels, flying squirrels and other small animals, plus a few birds, make up the large part of their diet. Given the opportunity they will not hesitate to kill and eat pigeons. They are known to occasionally winter throughout their breeding range, which in the Midwest extends from southern Canada to southern Illinois and Indiana. When the mouse population is abundant they will feast on this available food.

One factor that is noticed when examining the heads of dead owls is their asymmetrically shaped ear cavities – both quite different. This contributes in part to their phenomenal hearing ability, perhaps the best of any animal group on earth.

The asymmetry of the saw-whet’s ear openings is so exaggerated that its skull appears to be quite lopsided. However, this feature coupled with the extreme width (for so small an animal) between the two ears enables them to detect a timelapse of three ten-thousandths of one second, thus making it possible for the owl to tell whether a sound was made to the left or right of a certain point. Tests have proven that they can zero in with deadly accuracy in total darkness on prey that has made a noise during its movements.

The streaked protective coloration of the saw-whet owl, its small size, unlikeliness to fly at the approach of a human, its ventriloquistic abilities and its tendency to favor the deepest niches of evergreen woods all add up to the rarity of its being seen by people, in winter as well as in summer.

It is said that the best chance of seeing one is in the early morning. This bird prefers to perch for a brief time in full view from the tip of a spruce or fir tree. It has a wingspan of about 22 inches, and because of possessing a relatively short tail, the bird exhibits an almost bat-like appearance in flight.

Its size ranks 13th among the 18 owls of North America. The largest (heaviest) is the snowy owl and the longest is the great gray owl. Five owls are even smaller than the saw-whet. When the lovely docile, little saw-whet owl peers down at you, its gleaming yellow irises sparkling, it could just as well be pleading for your understanding and tolerance. What a perfectly beautiful and harmless creature it is toward people but what sudden death it brings to mice. How lucky you will be to finally see one of these in the wild!