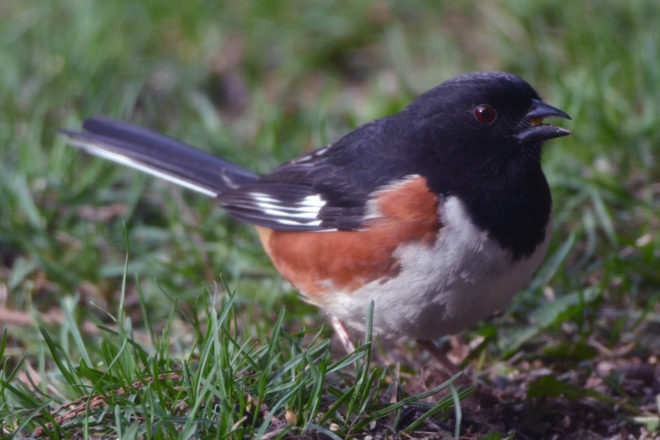 I remember the early morning bird outings that Roy and I would lead for The Ridges Sanctuary back in the 1970s and hearing my first rufous-sided towhee. Its “drink your tea” song emanating from a shrubby field out in the country was so distinctive. Many birds have a song and a call, often quite different in sound. Their call note sounds like “che-WINK.”

The AOU (American Ornithologist’s Union) has changed the common name of the rufous-sided to eastern towhee, Pipilo erythrophthalmus. The species name, erythrophthalmus, refers to its red eye. Its average length is eight to nine inches. The male has a black back, tail, hood and upper breast contrasting with a white lower breast and belly. The female is a rich milk chocolate brown where the male is black. Both have chestnut or reddish brown flanks, dark red eyes and a conical beak.

The black tail has white feathers on the underside and is longer than the wing. The bird is similar in size to a catbird and is lumped in field guides with sparrows, buntings and tanagers.

The breeding range of the eastern towhee is from southern Manitoba and Quebec in Canada to Minnesota and Iowa east to southern Maine and much of the eastern United States. It winters in the southern tier of states from central Texas to Florida.

Their population numbers have been trending downward in recent breeding bird census reports. We see them in our yard during spring and fall migration but seldom for more than one day. Preferred habitats for nesting are shrubby old fields, thickets with accumulated leaf litter, willow-alder patches, woodland edges and openings. 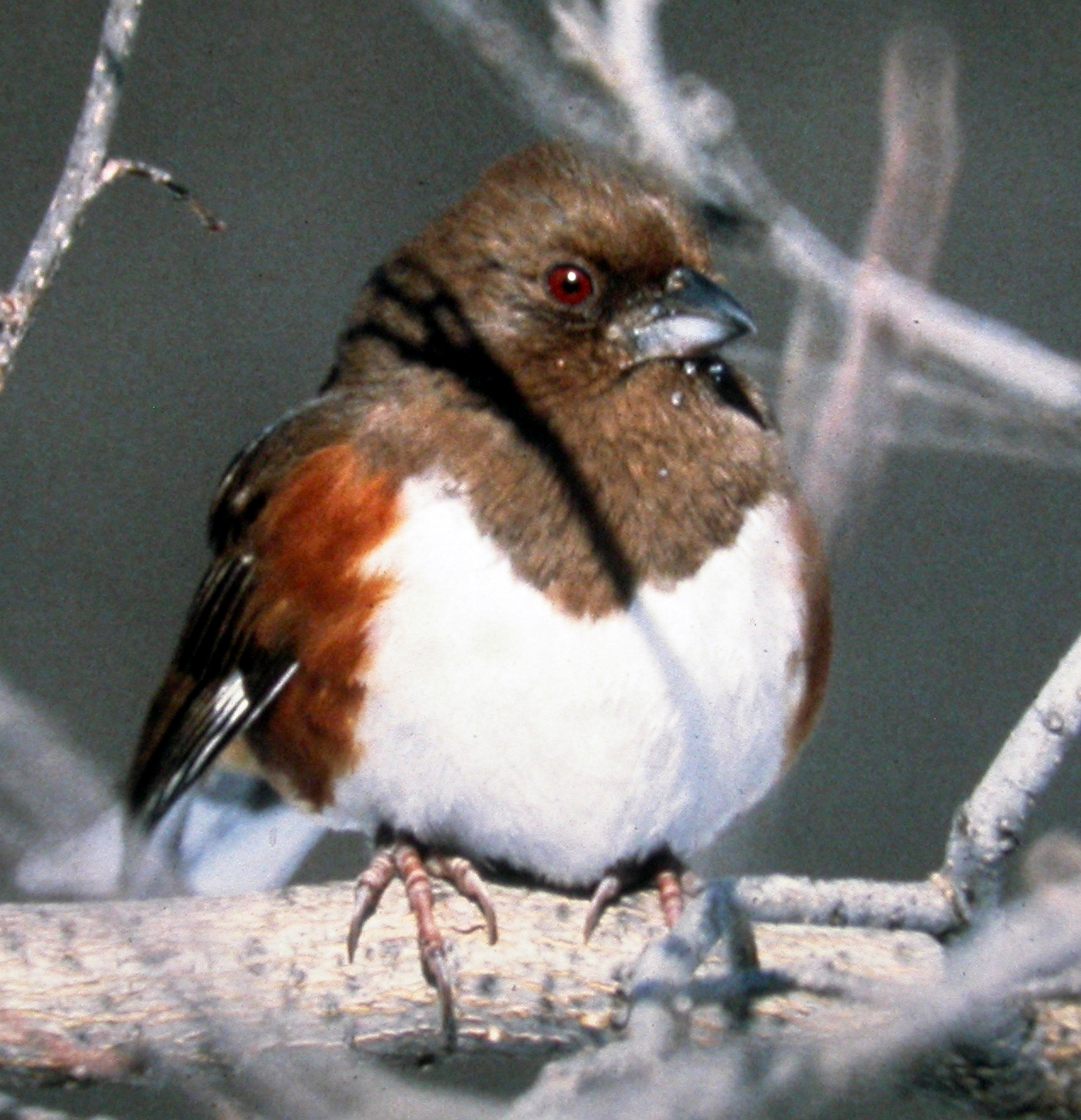 A female eastern towhee is brown in all the plumage where the male is black.

The nest of the eastern towhee is the sixth most parasitized by brown-headed cowbirds. It is firmly built by the female in about five days and made of bark strips, leaves, weed stalks, twigs, grasses, pine needles and lined with fine grasses and sometimes animal hair. It is placed on the ground under a shrub or up to five feet high in a bush or small tree.

A clutch is usually three to five eggs that are creamy white to grayish with a slight gloss and lightly coated with small brown spots. The egg measures about one inch long by three-quarters of an inch wide. They typically have two broods in our region and sometimes three in the south.

The female incubates her eggs for 12 to 13 days. Both parents feed the young as they grow in the nest for 11 to 12 days. After fledging the chicks are dependent on the parents for another month before they can take care of themselves.

During egg-laying and incubation the male rarely enters close to the female on the nest. These birds are very secretive.

Roy and I camped in northern Florida in the spring of 1989 and we saw the yellow-eyed subspecies there, Pipilo rileyi, which has less white in the tail edges. Its breeding range is from Arkansas and Louisiana eastward to southern Virginia and northern Florida.

Another species in the Pipilo genus is maculatus, the spotted towhee, and is similar to our eastern towhee but has many small white patches in its wing feathers. It is the same size but lives in the west from British Columbia down to northern Mexico and breeds as far east as the western Dakotas, west-central Nebraska and western Colorado. It has a brighter red eye than our eastern towhee. Winter ranges of the eastern and spotted may overlap in central Kansas, Oklahoma and Texas.

The last Pipilo species in North America is the green-tailed towhee, P. chlorurus, which is smaller and looks much different than our eastern towhee. In fact it has a red cap, yellow-green upper back and wings, gray face and breast and white throat. It looks more like a sparrow with a long tail and chunky body.

Another group of towhees is in the Melozone genus. Their home range is the far west coast and the southwest canyons and shrubby stream sides. The three in this group are the California, canyon and Abert’s towhee. All appear more like gray to gray-brown sparrows compared to our eastern towhee and measure from 8½ to 9½ inches in length. All towhee species like to scratch on the ground no matter which habitat they occupy.

Our eastern towhee was confirmed nesting in 67 of Wisconsin’s 72 counties according to the work done with the first Wisconsin Breeding Bird Atlas from 1995 to 2001. The second atlas of breeding birds is being researched now, in its fourth year of the five-year project. 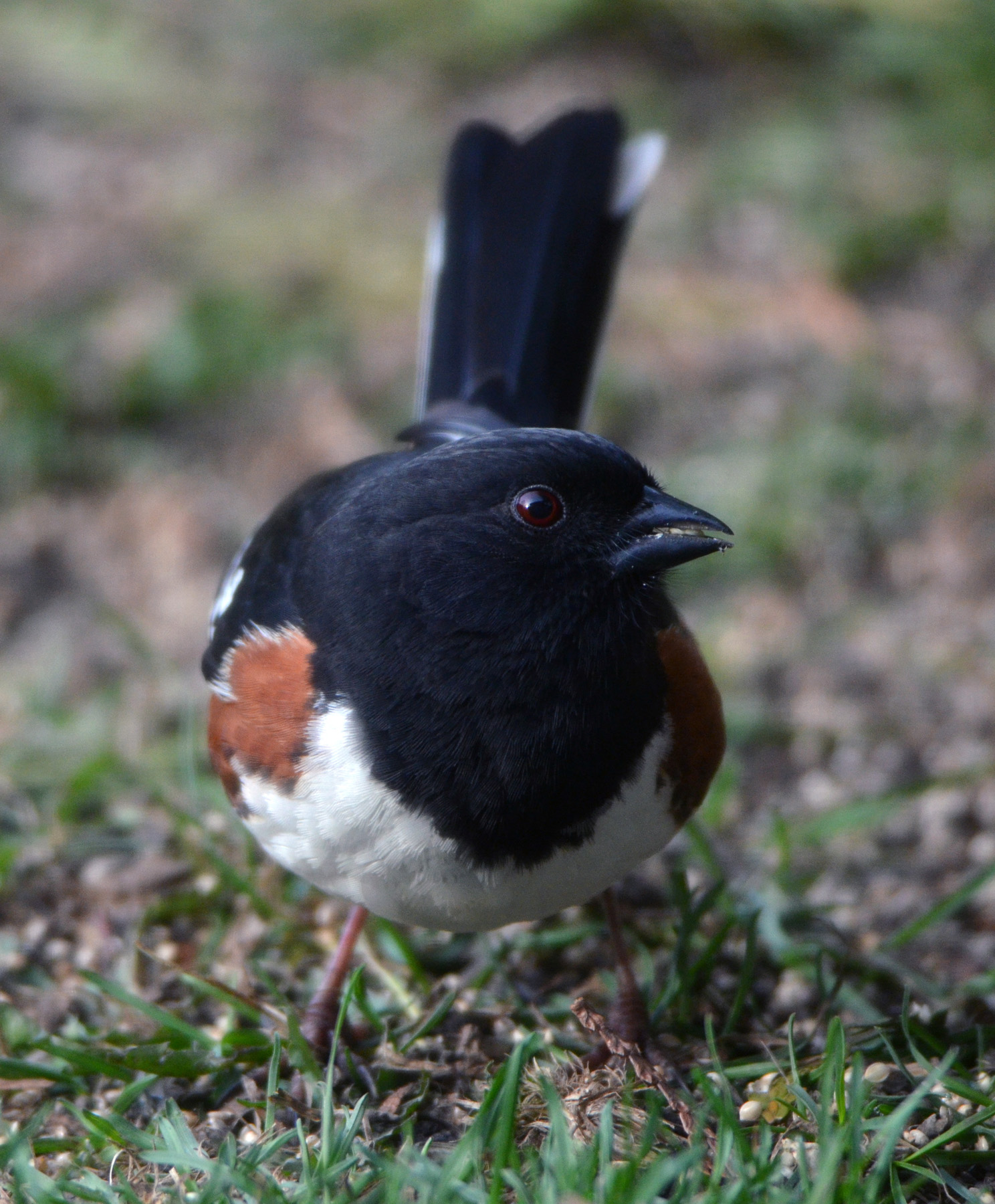 The male eastern towhee has a long black tail with white edges.

My records of Door County’s last dates in autumn in the past 10 years range from Oct. 3 to Oct. 25. So they are here for a little more than six months of the year.

The eastern towhee is a great scratcher in the leaves in search of its food. It has the habit of kicking back with both feet simultaneously. It will also glean from twigs, branches and tree trunks. During the nesting season its diet is mostly insects like beetles, true bugs, caterpillars, moths, ants, spiders, snails and millipedes. In winter, when the insect population is much lower, they will eat seeds and berries.

Predators include certain snakes that will eat the eggs or very young nestlings. Other hunters are owls, hawks, raccoons, house cats and chipmunks. It’s no wonder they are so secretive. Nesting on the ground makes them an easy target for many predators.

Learn their “drink-your-tea” song and the “che-WINK” call and be thankful for every sight you can get of these hidden beauties.