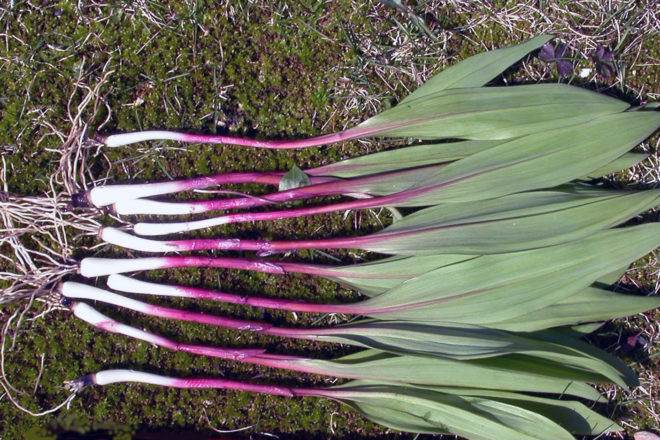 Wild leeks in spring can be eaten, but try only a small amount the first time. Photo by Roy Lukes.

Nature’s greening of the earth

Here it is, many days after St. Patrick’s Day, and the color green is still on my mind. As I look out at my drab, brown, partly snow-covered woods, I think about the first plants that should be pushing out of the ground in April: the wild leeks.

If you grew up in the Smoky Mountains of Tennessee, you’d call these plants ramps. My late husband, Roy, and I vacationed in that glorious national park in late April about 45 years ago. We learned that there was a Ramp Festival every spring, when people went into the woods to dig up these small plants that look a bit like green onions.

So many were harvested over the years that it became difficult to find them, and people had to travel farther away from that part of Tennessee to distant woodlands. In Door County’s hardwood forests, they are very common native plants.

The use of leeks dates at least as far back as the time of the Egyptian pharaohs. In the Bible, Numbers 11:5 states, “We remember the fish, which we did eat in Egypt freely; the cucumbers, and the melons, and the leeks, and the onions, and the garlic.”

Apparently those plants were somewhat similar to the cultivated leeks available through seed catalogs today, but they have also escaped into the wild and become naturalized in some of the Eastern states.

All leeks, native or otherwise, are generally alike. They belong to the large lily family, which has about 325 species, and they are close relatives of onions, garlic, shallots and chives. Their genus, Allium, is Latin for “garlic,” and I’ve always felt that the flavor of leeks is considerably more like that of garlic than onion. Of the 12 species of Allium listed in Gray’s Manual of Botany, two are leek – one being the naturalized plant from southeastern Europe.

Other native wildflowers of this region that are related to leeks – and often grow in the same woods – are bellwort, trout lily, asparagus, Clintonia, Canada mayflower, Soloman’s seal, twisted stalk and trillium.

The rolled-up, quill-like foliage of emerging leeks quickly develops into flat, rubbery, rich green leaves that can grow to two or more inches wide and eight or nine inches tall. Frequently they grow by the hundreds or even thousands in the rich soil of maple/beech/hemlock hardwoods. If you’re in doubt about the plant’s identity, trust your nose for a positive identification: Many say the odor and taste are a pleasant combination of onion and garlic.

The leaves, like typical ephemerals, appear rapidly in the early spring and survive for a relatively short time. They wilt, turn yellow and disappear quickly after the dense forest canopy of broad-leaves has formed. The bulbs persist much like young onions or scallions, with the base being somewhat swollen but not a true bulb.

In July, flowers appear at the top of a thin, nine- to 10-inch stem. The quarter-inch white florets radiate from a central point and resemble a typical rounded cluster of onion flowers, although much smaller. By autumn, the flowers give way to tiny, black, buckshot-like seeds, each at the end of its half-inch-long stem, all sitting at the top where the flower had bloomed.

If you dig up a leek during fall color season, you’ll find the bulb to be the size of your thumb. Spring, however, is the best time to eat the young, tender leaves and the small bulbs, finely chopped and added to a salad. A gentle warning: Go easy the first time because the flavor goes a long way (and the plant is considered to be an excellent diuretic). Euell Gibbons, in his book Stalking the Wild Asparagus, lists several recipes for wild-leek soup and salad, creamed leeks and even pickled leeks.

I love to tell the story of how Roy used to introduce his second-grade class to native plants. A field trip to a school forest in the early spring meant an ample supply of wild leeks, and Roy asked the children to break off a leaf, smell it and give the plant their own name to remember it better.

One boy who already knew the plant said slowly, with his eyes wide open, “Oh, we eat wild leeks at home every spring, and when you eat leeks, you have bad breath for three days!”

Try them for yourself to see whether that youngster was right. During these days of social distancing, your breath may not be noticed by other people!