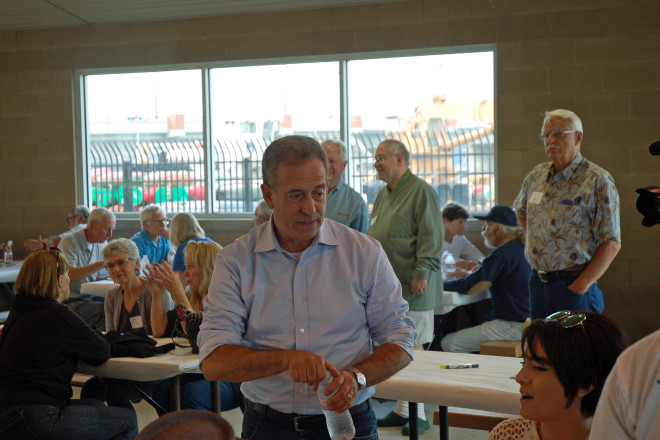 In 1934 former Democratic U.S. Senator Peter G. Gerry of Rhode Island became a footnote in political history for regaining his Senate seat after being voted out of office in 1929 (he was also the grandson of Elbridge Gerry, the fifth vice president of the United States and the man who gave his name to the term “gerrymandering”).

Russ Feingold hopes to follow in Gerry’s footsteps by regaining the U.S. Senate seat he lost to Oshkosh businessman Ron Johnson in 2010. 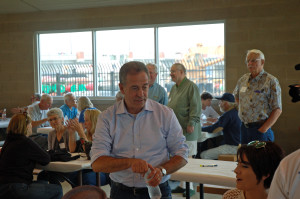 “It’s going great,” Feingold said in a quick interview during the sold-out Democratic Party of Door County picnic at Sawyer Park in Sturgeon Bay on Aug. 29.

“This is a state that’s been treated pretty harshly by some people that are trying to dismantle our unity, and even though people have been hit very hard, they are ready to come together again. I think they see my campaign as one of those things that can help people come together. That’s the way it feels. We’ve been to all 72 counties in just 101 days and we’re already going back to a lot of them. I admire the spirit of the people. They’ve been treated badly and they’re ready to come back in a positive way.”

After losing to Johnson by about 100,000 votes (1,125,999 to 1,020,958), Feingold served as a visiting professor at Marquette University Law School. In 2011 he formed a grassroots political action committee called Progressives United. In 2012 it was announced that he would be co-chair of President Obama’s re-election campaign.

For the 2012-13 school year, he served as the Stephen Edward Scarff Distinguished Visiting Professor at Lawrence University in Appleton. In June of 2013, he was appointed special representative for the African Great Lakes region, and left that position this February. He also managed to find time to write a critically acclaimed book, While America Sleeps: A Wake-up Call for the Post-9/11 Era.

During his time in the Senate, Feingold served on the prestigious Foreign Relations and Intelligence Committees. He was also involved in various reform movements, including campaign finance reform (he and Senator John McCain created the Bipartisan Campaign Reform Act of 2002), Wall Street reform and pork barrel spending reform. He was also an advocate of civil liberties and was the only senator to vote against the Patriot Act.

What motivated him to return to the political fray?

“Well, what really did it is seeing how many people were upset about the loss of unity and common spirit in this state about things like the environment, protecting our Great Lakes, our university, making sure that the things that always brought us together are protected,” Feingold said. “The governor, and frankly a lot of people in Washington that are running the show in the Senate, they don’t care about that stuff. They really want to protect the big corporations and the big businesses from out of state. That has nothing to do with our political tradition, so I’m fighting for Wisconsin’s political traditions and our spirit of unity. That’s why I wanted to run.”

Asked if it helps his campaign that The Washingtonian named Senator Ron Johnson the most clueless senator of 2014, Feingold said he is trying to focus on what people of Wisconsin want.

“The incumbent Senator doesn’t do that,” he said. “He thinks he’s got all the answers and once in a while he comes out and tells them the answers. I’m not running to be boss. I’m running to represent people. I think that’s a big problem he’s got, that he’s never really respected the idea that he serves the people of the state of Wisconsin, and that’s something I’ve always understood. The reaction seems very good and I admire people for their enthusiasm. It has really helped me to do this.”