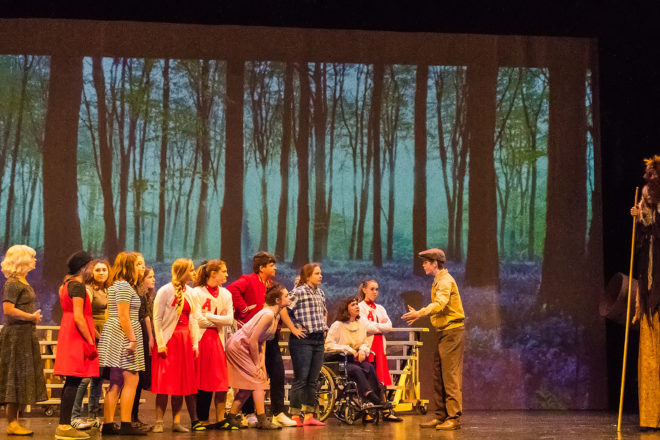 Last spring, when Lizbeth Thomas chose The Addams Family as the 29th musical she’d direct at Gibraltar High School, she said, “After the tragic losses the high school and the community have faced in recent years, I thought a comedy was appropriate.”

This year, she chose Big Fish The Musical, and the inspiration, she said, was her own family. The play’s central characters are Edward Bloom, a traveling salesman who comes home from every trip with wild stories about the people he’s met and the things he’s seen. Everyone is thrilled by Edward’s tales except his son, Will, who is serious and pragmatic, doesn’t believe anything his father says and just wants to hear the truth. The conflict this creates in the family continues for decades, as the story, set in Alabama, moves between the 1950s and the 1980s.

“Big Fish is about family and relationships,” Thomas said, “and I think it’s relatable to everyone’s human experiences because it focuses on the family stories that shaped, influenced and inspired who we are today. Edward Bloom was the ultimate storyteller, so much so that his son couldn’t discern whether his stories were fantasy or reality. It’s the proverbial ‘fish tale,’ where exaggeration seems to overshadow fact from fiction. I grew up in a household where my father’s stories were sometimes unbelievable, but they were meant to connect us to who he was. I believe everyone wants to be important in their family’s eyes, to leave a legacy for their children.

“My fourth grandchild arrived a month ago, and it confirmed for me how important it is to leave a legacy for my family. When life’s stories are remembered, you become immortal. This musical is filled with magic, love, luck and crazy coincidences. I hope people will enjoy this poignant play about stories and the connection we, as families, make through the stories we tell. Dreams are what keep us alive, and Big Fish The Musical is a tribute to the power of dreaming big.” 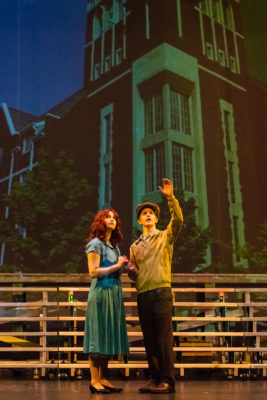 An imaginative display of costumes and props set the stage for this weekend’s production of Big Fish the Musical at the Door Community Auditorium. Photos by Len Villano.

Big Fish The Musical is based on Daniel Wallace’s 1998 book of the same name (with a telling subtitle: A Novel of Mythic Proportions). It became a film in 2003. The musical premiered on Broadway in 2013. It has since played across the U.S., in Germany, England and Australia.

The story opens in the 1980s, when Will, about to be married, begs his father not to tell any of his “crazy stories” at the wedding. Although Edward doesn’t understand why Will feels this way, he agrees.

The action switches from scenes in Will’s childhood, when his father is a young man, to three decades later, when Edward is old and ill. The many scenes between depict Will’s discovery of the basis for many of his father’s stories, including some mysterious and magical situations and characters. Sandra, Edward’s wife and Will’s mother, is a strong woman who attempts to keep the peace between the two men she loves.

As the story unfolds, we learn how Edward won Sandra’s hand, how he attempted to save his hometown from destruction and why Will, finally, understands the reasons for his father’s wild tales.

“It’s a smaller cast than usual,” Thomas said, “but it’s the strongest choral group we’ve had in a long time. The harmonies are wonderful, and the music will make you cry, it is so beautiful.” (Perhaps coincidentally, the composer is Andrew Lippa, who also created the music for The Addams Family.)

Thomas loves a Barbara De Angelis quote, “The journey between who you once were and who you are now becoming is where the dance of life really takes place.”

“The greatest joy as a director,” Thomas said, “is to witness this transformation, this journey. Several of our cast members have gone beyond their personal boundaries, pushed out of their comfort zones and emerged as more confident, accomplished people. It’s unbelievable how kids grow from first rehearsals to opening night.”

Thomas said it takes a village for a small high school to mount a production of this magnitude.

“Despite many obstacles – a school trip, vacations, snow days that cancelled many rehearsals, and a sprained ankle suffered by one of the leading ladies and lead dancer the week before the show – confirms that if we stand together, get creative and remain positive, amazing things will happen. As always,” Thomas said, “this show was a labor of love. It was meant to be.”

Performances are scheduled for Friday, April 27 and Saturday, April 28 at 7 pm, and Sunday, April 29 at 2 pm at the Door Community Auditorium in Fish Creek. Tickets are $5 for students and senior citizens, and $10 for adults. Tickets may be purchased in advance at the DCA box office or before each performance.